Meditating on "Shit" and other beautiful thoughts... 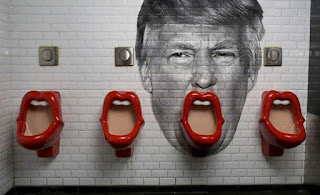 "Don't you see that whatever enters the mouth goes into the stomach and then out of the body?  But the things that come out of the mouth come from the heart, and these make a man unclean.  For out of the heart comes evil thoughts, murder, adultery, sexual immorality, theft, false testimony, slander.  These are what make a man unclean; but eating with unwashed hands does not make him unclean."
Matt. 15:17-20

"I tell you the truth, whatever you did for the least of these brothers of mine, you did for me."
Matt. 25:40

"For I desire mercy, not sacrifice, and acknowledgment go Yahweh rather than burnt offerings."
Hosea 6:6

"When a foreigner resides among you in your land, do not mistreat them.  The foreigner residing among you must be treated as your native-born. Love them as yourself, for you were foreigners in Egypt. I am the Lord your God."
Lev. 19: 33 & 34

For I was hungry and you gave me something to eat, I was thirsty and you gave me something to drink, I was a stranger and you invited me in.
Matt. 25:35
"Cursed is anyone who withholds justice from the foreigner, the fatherless or the widow." Then all the people shall say, "Amen!"
Dt. 27:19
Do not forget to show hospitality to strangers, for by so doing some people have shown hospitality to angels without knowing it.
Hebrews 13:2


Before we begin: In case you were curious, Jesus was not commenting on rinsing your dirty hands before you sit down for dinner.  Back in that day, religious Jews had ceremonial ways of washing various parts for various situations that made them clean/unclean in a religious sense.  PLEASE, wash your dirty mits before you eat...especially if your having lunch with me.  Pretty sure that Jesus would be a fan of hand sanitizer.

ALSO, before we begin: This post will have a naughty word in it.  And this naughty word will be repeated quite frequently.  This will be done out of necessity to make a point, but also because I freely admit that I get a kick out of stirring the pot from time to time. (Yeah, knock you over with a feather.)

So this past week, Pres. Voldemort supposedly used the term "Shit-hole Countries" to refer to Haiti and various African nations.  I had no intention of writing about it at all.  I mean, it's all over the news anyway.  It's just one more ridiculous outburst from that man.  Thus far, he's said enough offensive nonsense that any other politician would have resigned out of shame.  But he has no shame...and the nation has grown callous.

I grew astounded at how many people were rushing to his defense, including denying that he had ever said it in the first place.  The worst part is watching "Christians" rush to his defense.  I'm not saying that they were shrugging it off as no big deal.  These folks were adamant in their defense of him.

I fully get non-believers defending him for various reasons, but Christians...followers of Jesus???

On Facebook, I have seen multiple arguments that Voldemort never actually said those words.  Naturally, the President claims he never said them.

The truth is, unless someone had a tape recorder going, no one will know for sure.  Most people, Senators included, in the room say he did say that.  Some say he didn't.  He said/she said, I suppose.

But here's what gets me; should anyone be surprised if he did say that????  Let's get real.  This is a man who has mocked veterans, women (Never mind his bragging about sexual assaults.), people with special needs and the handicapped.  He has defended White Nationalists, for Pete sake.  I would think we should all be surprised if he didn't say what was reported!!!


So why should his defenders care if he did?

Blessed is the man who does not walk in the council of the wicked
or stand in the way of sinners
or sit in the seat of mockers.
But his delight is in the Lord,
and on his law he meditates day and night.
Psalm 1:1 & 2

Yesterday, Franklin Graham posted this on Twitter. (Yes, I follow him on Twitter.) I couldn't help but notice the irony.  An Evangelist who backs and blesses Trump no matter what he says or does.  It was this tweet that inspired this post. (He did have some interesting response tweets on that post.)

And then there was this...
https://www.washingtonpost.com/news/acts-of-faith/wp/2018/01/12/trumps-shithole-comments-have-enraged-many-but-some-evangelical-leaders-still-back-him/?utm_term=.ec6c8dc8b4c3

Good ol' Robert Jeffres of First Baptist in Dallas, Texas.  The man who compared Jesus to an American soldier this past 4th of July sermon, and also sang "Your a Grand Old Flag" as part of the worship service.

“What a lot of people miss is, America is not a church where everyone should be welcomed regardless of race and background,” Jeffress said. “I’m glad Trump understands the difference between a church and country. I support his views 100 percent, even though as a pastor I can’t use that language.”

"America is not obligated to accept people based on need, such as the case with refugees," he said. “I wouldn’t let the language obscure the point he’s making: Why would we allow people who will not benefit our country?” Jeffress said. “We have the right to screen [refugees] based on the economic benefit they might bring, and we can establish the criteria we want to use.”

So let's talk about "Shit-holes" for a while, shall we?  Also, let us consider the Rev. Jeffres thoughts on not helping refugees.

I'm of Norwegian (The folks that Voldemort wants more of coming to this country.) and Swedish descent.  Those folks started immigrating to the U.S. after the Civil war.  Do you know why?  Because Norway and Sweden were Shit-holes!  They were.  Back during that time, the oldest son was the legal inheritor of the land in the family.  This left the younger sons with virtually nothing but poverty to look forward to.


So what do you do?  You immigrate to America.
You leave your shit-hole for a better opportunity.

In the 1840s, Ireland was a shit-hole.  The British exported the majority of food they grew, and then you throw in the potato famine with at least 1 million people dying.  What do you get?  A poverty & disease ridden shit-hole.


So what do you do?  You immigrate to America.
You leave your shit-hole for a better opportunity.

In the 1880s and 90s, Imperial Russia was a shit-hole...especially if you were Jewish. (Not that it's gotten much better.) Orthodox Russians and their Cossack buddies often celebrated Easter by burning Jewish villages.  I'd say that qualifies as a shit-hole.


So what do you do?  You immigrate to America.
You leave your shit-hole for a better opportunity...
even though being Jewish still brought it's share of trouble.

In the late 70s and early 80s, Vietnam decided to purge it's undesirables and ethnic Chinese.  We had recently moved to Minnesota when these folks came flooding in.  Most of S.E. Asia at that time qualified as a shit-hole.  You got the commies in Vietnam getting revenge.  You have the Khmer Rouge in Cambodia committing genocide of it's own people just because it seemed like a good idea at the time.  You also have the Hmong fleeing form everything.  Like I said, the whole area was a shit-hole.


So what do you do?  You immigrate to America.
You leave your shit-hole for a better opportunity.
Or in this case, because you have no other option.

I could go on and on with more examples...

What the good Rev. Jeffers doesn't seem to understand is that living in a shit-hole is the primary reason people immigrate in the first place.  He also appears blind to the historical fact that these very people have never, ever been a drain on our country.  Instead, they have been a tremendous boon & blessing for our nation.

Even the Somali refugees that began to come here not so long ago, are beginning to make a positive economic impact. (Not to mention that some are now in the State Legislature and on various city councils.)

From an economic point of view, people from shit-hole countries seem to be precisely the type of people you want coming into your country!!!!


But that's not the real reason that I'm worked up...


It's bad enough, to me anyway, how so many "Christians" blindly & enthusiastically support Pres. Voldemort and his policies.  But this one in particular really galls me.  That any "Christian" would be in support of thwarting immigrants and refugees from coming here smacks of nothing but fear, a lack of trust in the resurrected Christ, and selling out to the world.  They certainly aren't looking at this situation through the eyes of Jesus, I can promise you that.

I would think that the average church would be lusting after the opportunity to get more and more immigrants & refugees over here!  What better way to share the Gospel and love of Jesus????  Talk about the fields being ripe for a harvest.

If you can't  go over there and spread the news of Jesus, then bring em' here!

God's no dummy.  He knows what he's doing.  I've talked to so many pastors and internal missionaries that I believe %100 that God is using human generated misery to bring these folks to a place of safety where they can hear His Good News.


The irony in all of this is obvious!

President Voldemort, and his black, vacuous heart are opposed to the will of God...even if he doesn't know it.  The very people who claim to love Jesus, yet support Trump's policies on this are actually standing against the very thing Jesus would wish.


I'm not sure what they are going to say to him when they meet him face to face.


It strikes me that at the end of the day, if you really want to talk about shit-holes, the biggest one is the black hole between President Voldemort's ears.  😊


And now, an extremely appropriate song for the occasion...