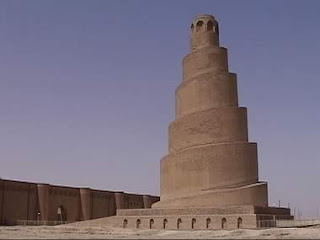 Now the whole earth had one language and one speech.  And it came to pass, as they journeyed from the east, that they found a plain in the land of Shinar, and they dwelt there. Then they said to one another, “Come, let us make bricks and bake them thoroughly.” They had brick for stone, and they had asphalt for mortar.  And they said, “Come, let us build ourselves a city, and a tower whose top is in the heavens; let us make a name for ourselves, lest we be scattered abroad over the face of the whole earth.”
But YHWH came down to see the city and the tower which the sons of men had built. And YHWH said, “Indeed the people are one and they all have one language, and this is what they begin to do; now nothing that they propose to do will be withheld from them.  Come, let Us go down and there confuse their language, that they may not understand one another’s speech.”  SoYHWH scattered them abroad from there over the face of all the earth, and they ceased building the city.  Therefore its name is called Babel, because there YHWH confused the language of all the earth; and from there  YHWH scattered them abroad over the face of all the earth.
Gen. 11:1-9 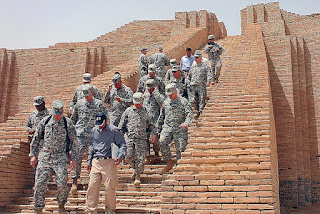 That picture at the top is a Ziggurat...an ancient staircase of sorts.  This here is another picture of a Ziggurat with U.S. soldiers on a sight seeing tour.  They are fairly common in the Syria, Iraq and Iran.

They come in a variety of shapes and sizes.  But they all have in common is that back in the day, the ancients were trying to create a "Sacred Space" for their gods.  All Ziggurats were next to or on top of temples.  There is a debate as to wether the staircase was for folks to go up to the gods, or for the gods to come down. (Most are pretty sure it was for the local god to come down)


It's been a tough week for my Dad.  He had knee surgery on Monday, and has been in a lot of pain ever since.  I had to go to my folk's place after work on Monday to help lift him out of a chair and into his walker.  I've never seen him look so week.

Yesterday and the day before, I had to babysit him while my Mom and sister were out.  He's getting better fast, but is still in pain.  He also hasn't pooped in 7 days now. (TMI!!!!!) I'm concerned that when he does, we'll need to have him squatting in the garden, due to the amount of compost he is sure to expel.

At any rate, since I had to babysit, I brought along my Jewish study bible to read.  I'm determined to read through the entire Old Testament eventually.  I can't wait until I hit Leviticus and Numbers.  That's sure to be a hoot. 😑😑😑

What I like about this study bible is how much thorough commentary there is in it.  My NIV study bible is fairly watered down for my tastes.  They don't want to say anything controversial, and it's clear that they try to find an uncomfortable consensus.  It ends up being like Garth Brooks' music.  Finding solace in the lowest common denominator, and all wishy-washy.

Anyway, I really enjoyed reading about the Tower of Babel, and the Rabbinic commentary on it.  Supposedly, all humans spoke the same language at that time...or at least in this area. (Depends on how much of a Fundie you are.) But what's interesting if you are paying any attention at all, is that only 2 sentences before the beginning of this story, in the account of the Table of Nations from Noah's family line it clearly says, "These are the descendants of Shem according to their clans and languages, by their lands, according to their nations." (Get. 10:31) In fact, jump back to 10:5, and it says, "each with it's language."

So right before the beginning of the story of the Tower of Bable, the bible says that their were all these other languages being spoken.  Someone hostile to Scripture would point out this glaring contradiction and laugh.  Actually, they should laugh...and I'll tell you why in a minute.

So, blatant contradiction????  I mean, it's a bit unlikely that whoever was writing this down didn't notice those other sentences.  So what's going on?!?!?


This is one of those instances
where linguistic and culture context
need to be reaffirmed as being of central performance.

In other words, the bible doesn't get it wrong.
It's WE who so often get the bible wrong.

For starters, we have to remember who the Old Testament was written to, and why.  The O.T.s final form was completed during the time of Israel's exile in Babylon and within a few generations after that.  It was NOT written to 21st Century Americans any more than it was written to 18th Century Japan.

It was written for us, because it's God's word.  But it wasn't written to us.  So what ever you do, don't try and read our modern concepts of science, history, journalism and what not, into a culture that had no knowledge of or cared about those sorts of things.

If you try and read our concepts into this ancient text, you'll end up with "Name it & claim it" prosperity preaching or Young Earth Creationism.

Okay, so here's why you should laugh at this story.  It was meant to be funny.  Near as I can tell this is a satire of the Babylonians...an ancient version, anyway.


There's actually a LOT of humor in the bible.  It's easy for it to get lost in translation.  So that's another reason to stick to as much cultural context as possible.  Here's one for ya.  Most people don't know it, but the book of Jonah is actually a comedy...a bit like Alice down the Rabbit hole.  Try reading it that way some time, and you will pick up on the comedy themes in it.


If you've ever watched a skit on SNL or Key & Peele, you know what a satire is.  Are those skits meant to be an actual historical account?  Of course not.  But they're REAL!

There are a whole lot of digs at the Babylonians in the O.T.  Starting with the ancient Hebrew's alternative creation story.  Remember, the Babylonians conquered and exiled the Jews.  Now, this conquered people are getting a little payback.

The center of this story is the motivation for the building of this tower.  It wasn't to honor any god or gods.  It was meant to honor the people building it!  "To make a name for ourselves." A major no-no!

The humor comes when YHWH actually takes a look to see what's going on.  He actually has to come down out of heaven to even see this thing.  "Oooooh, look eeeeeeeeet's so tiny." (Say that with a high pitched voice.) Then he even brings the sarcasm about how if these folks can pull this off, YHWH is in big trouble.  So he grabs his divine council, heads on down and drops a bomb on their tongues using only his thought.

It's essentially the ancient near-eastern equivalent of someone pointing out to a big, buff muscle guy that his schwanzstucker is barely 3 inches of swinging death. (Okay, crude I know.  But you get the point.)  And that IS funny!

This is why I love the bible so much, especially in it's ancient context.  Sure, they didn't have iPods and what not, but it's the same old same old when it comes to human nature.  We really love to think that we're all that and a bag of chips.  There really is nothing new under the sun.  We have the very same issues today that they had thousands of years ago.

I mean, look at our current President.  A living, breathing pile of anti-social narcissism. "I alone can fix it."  He thinks he's God's gift to America, and far, far too many so-called "Leaders" in the church think so too.  All this from a man who said recently, "Who knew fixing health care would be so difficult?" Duuuuuuuuuuuuuuuh........

None of us should be all that enamored over our ability to successfully tie our own shoes.  God is no respecter of persons.  He isn't impressed by our ability to build a tall building or create one of those new fangled wireless devices.

Through his creative and sustaining will, this God holds the vastness of the universe together.  Every drop of rain that falls, ever blade of grass that grows, does so by his will.  Building a tower out of bricks isn't going to win you any gold stars next to your name.  Nor is your ability to repeatedly cheat on your wife and get away with it.

I wasn't much into science as a kid.  Now that I'm older and NPR has the podcast and radio show, "Radio Lab," I'm getting more and more into it.  Still, with every scientific discovery of how God goes about his business in the natural world, I realize how much we still don't know.  It makes me wonder if God is sitting on his throne saying something along the lines of, "Well, that took you long enough."

Here, now you can get your "Nerd" on along with me...
http://www.radiolab.org

The ancient Hebrews were a gutsy bunch.  They were an exiled minority in an Empire that thought it was the baddest boy on the block.  Yet, these ancient Hebrews compiled a library of books that said, A) We are still God's chosen people.  He still loves us. B) This isn't over.  Our God isn't done with us yet.  C) Your tiny little gods are a true joke!  They didn't do anything.  Our God is the real one who created everything.  And D) In fact, you Babylonians are kind of a joke, too.  You might be big and buff, but that tiny schwanzstucker of yours is not impressive!


You have to admit, that's pretty gutsy.
(I suppose it helps when you have the Holy Spirit guiding your writing.)

I guess the ultimate moral of this satire is this; never be arrogant in front of anyone, especially not YHWH.  He might just teach you a lesson.  And apparently, he has no problem using humor to do it.


He has shown you, O mortal, what is good.  And what does the Lord/YHWH require of you?  To act justly and to show mercy and to walk humbly with your God.
Micah 6:8

Good advice, that.
Certainly beats trying to build a stairway to heaven.