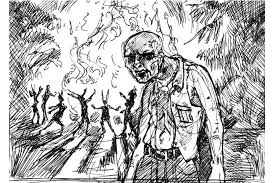 The heart is deceitful above ALL things, and desperately wicked; who can know it?
Jer. 17:9

There is not a righteous man on earth who does what is right and never sins.
Ecc. 7:20

This righteousness from God comes through faith in Jesus Christ to all who believe.  There is no difference, for all have sinned and fall short of the glory of God, and are justified freely by his grace through the redemption that came by Christ Jesus.
Romans 3:22-24

For we do not have a high priest who is unable to sympathize with our weaknesses, but we have one who has been tempted in everyway, just as we are - yet was without sin.  So let us then approach the throne of grace with confidence, so that we may receive mercy and find grace to help us in our time of need.
Heb. 4:15 & 16


It's been almost a year now, and I remember it well.  It was still very early in the morning, and I was driving into town from our families' cabin to buy a newspaper.  Our cabin is about 7 miles away from the town of Annandale, MN.  I was listening to MPR and they were announcing that a Person of Interest had been arrested in the Jacob Wetterling abduction case from almost 30 years ago.  I recall pulling up to the local Super America gas station.  They announced that they had found a man, and his house was full of child pornography and other items of guilt.  The police had caught him at his house in Annandale...

I remember stepping out of my car and realizing that I was roughly 2 blocks from his house.  Talk about the hair on the back of your neck standing on end. 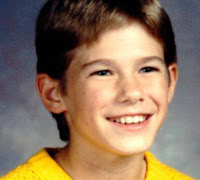 If you lived in Minnesota for any time at all, you are most likely familiar with this case.  Jacob was a pre-teen boy.  He was heading home in the dark with two of his friends.  Someone drove up to them and pulled a gun on the kids.  He made Jacob get it, and then he drove off.


No one has seen Jacob since. 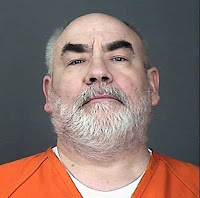 If you've been paying attention at all, you might know that this man, Danny Heinrich, has confessed to the abduction, rape and murder of Jacob in the last few days.  He did so to plead out his case.  He will receive 20 years in prison for a lesser charge.

Jacob's family signed off on the deal.  In return, Heinrich took them to the place where he had buried Jacob's body.  In court, Heinrich explained that he sexually assaulted and then murdered little Jacob the very night he abducted him.

Apparently, Jacob's last words were, "Mister, what did I do wrong?"

(It should be noted for the record that a 20 year sentence for this crime is not what it seems.  If he is still alive after 20 years, this man will be committed by the State of Minnesota to a perpetual commitment & confinement for public safety.  He will never be a free man.

Naturally, there is also the question of where he will be imprisoned.  His life could very well be short, indeed, thanks to other inmates.)

Today I drove home from the cabin and listened to the radio.  Two local reporters who investigated the case on Jacob were being interviewed.  One of them actually got into Heinrich's car and secretly recorded him for a few minutes. (This was a LONG time ago, when Heinrich was one of a number of suspects.)

What became clear in no short order was the the investigation was botched from the beginning.  The local police didn't even seal off the abduction site.  Evidence was trampled and polluted.  It turns out that the main reason Heinrich murdered Jacob was that he heard a police car with it's siren pass by.


I'm still shaking and even tearing up a bit as I right this...

I think it was when I entered the town of Delano that I began to feel true hatred wash over me.  I was getting angry and griping the wheel of my car.  I wanted the drivers ahead of me to get the *&%$ out of the way so I could just drive.

I'm not a believer in the death penalty, but I began to think of fantasy situations where I could take Mr. Heinrich away and deal with him myself.  Without going into detail, I thought up multiple ways to make him suffer for days and days.

I've seen enough movies and what not.  I'm also a fairly creative person.  Believe me, I could come up with over a dozen torture scenarios in no short order for that man.  My goal would be to hear him beg God to reverse time so that he had never been born.  That thought made me happy...very, very happy.


The heart is deceitful above all things, and desperately wicked;
who can know it?


Then it dawned on me as I stewed in my anger.
I am no better than Danny Heinrich.


I'm a very introspective guy.  Maybe a bit too much.  I can think back to elementary school and still feel guilty for calling someone a name on the playground, or bullying a kid smaller than me.

I also know most...not all yet, but most of the evil that lives in my heart.  I have had some truly sick thoughts float around in the rusting walnut between my ears.  Just because I have't acted on something, in no way frees me from the fact that I've figured out a fool proof way to commit certain crimes. (Feel free to take a guess.)

Jesus said that if you even look at a woman in lust, you're guilty of adultery.  Wellllllll, I should have been stoned to death a couple thousand times by now.  I also wreak of vanity, arrogance, willfulness, demeaning behavior and simply being a down right ass-hole!

So there I was, fantasizing about slowly killing another human being...


I am no different than Danny Heinrich.


Now, lest you think ill of me and better about yourself, you had better take a good look into your own heart.  Unless you are a complete narcissist on the level of Donald Trump, or you are so clueless that you can't even approach a healthy form of introspection, you know...you know the potential for wickedness lurking deep inside you.

You can willfully fool yourself if you want to.  You can deny it.  But you're not fooling me, nor will I believe you when you argue otherwise

I spend a lot of time thinking about God in my conscious moments.  Only He knows how much my subconscious does when I'm asleep.  A good chunk of my thoughts revolve around the fact that the more I try to learn about Him, the less I seem to know.  He just keeps getting bigger, and I have a hard time "Getting" Him.

Forgiveness is a prime example of this.  I don't like saying "I'm sorry" when I do something stupid.  The irony is that I generally feel better when I do.  I can forgive others somewhat easily, depending on what they've done.  And I think that's the issue.


It depends on what they've done.


This is something that separates the God of the bible from humans.  Our forgiveness tends to be conditional and rated on a scale.  Not so with Christ.  He doesn't care.  I suppose that is what Grace is all about.  We don't and can't EARN his forgiveness.  Leaping about, offering sacrifices and promises fall on deaf ears with him.


He doesn't care.
His grace is his to give to whom he wishes.
And he offers it to all...

I wouldn't do that!  But I cannot deny the reality that Christ grieves for Danny and his wicked heart.  He wants to redeem him as much as anyone else.  You'll have to work really hard to prove that otherwise, based on the character displayed by Jesus in the Gospels.

You might as well not waste your time, because I doubt you can do it...even if you're a Calvinist!

Jesus died for men like Mr. Heinrich.  He also died for Hitler, Mao, Pol Pot, and even someone as evil as Donald Trump.  I am unfit to judge them because I have enough of my own #@!* on my plate to deal with.  I struggle every single day to hand my stuff over to Jesus.

Forgiveness?  I sort of get it.

The forgiveness that Jesus offers?  I guess I still have a lot to learn.

Normally, I try to find a song or video that illustrates what I just wrote.  I can't think of anything appropriate.  Plus, I'm still worked up emotionally and trying to process this mornings events.  Guess I'll just stop here.