To live in Babylon... 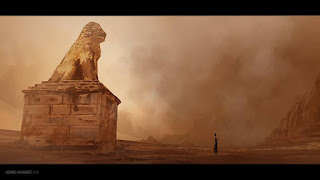 Jesus said, "My kingdom is not of this world.  If it were, my servants would fight to prevent my arrest by the Jews.  But now my kingdom is from another place."
John 18:36

The seventh angel sounded his trumpet, and there we're load voices in heaven, which said: "The kingdom of the world has become the kingdom of our Lord and his Christ, and he will reign for ever and every."
Rev. 11:15

You ever had a premonition?  You know, where you look at a person and you think to yourself, "Boy, I know exactly how this movie's gonna end."?

I can't say that I have those with crystal clarity, knowing every jot & tittle of detail.  But I do get a version of premonitions from time to time.  Maybe it's simply from having lived long enough to see various patterns and choices, and where this will get a person over time.

I had one many years ago about a kid I knew.  He worked for me while in high school.  He was a decent worker.  No problem there.  He didn't do drugs or party.  In fact, he was a part-time body builder, so that kept him out of trouble.

The problem was that he was an unapologetic racist.  He didn't mind getting physical pleasure from non-white girls, but he wouldn't "date" them...just get in the back seat with them.

He wanted to become a cop. (Not the best idea, I thought.) I kept in touch through social media, until I simply couldn't handle the extreme right-wing tripe that he would post.  Like anyone on the extremes of Left or Right, logic gets thrown out the window, and seething emotion rules the day.  "I want it to be true, so I'll believe that it is!!!"

One day, I politely called him on that.  I asked if he really believed what he was saying, or if he just hoped it was so?  I got a less-than polite, "Fuck you!" from him and his friends.  Needless to say, I let him go.  I remember thinking to myself, "A racist, far-right guy who openly dislikes anyone different from him, and is now a COP?  I know how this is going to end."

Roughly 36 hours ago, a black man was killed in the suburb of Falcon Heights, Minnesota. (That's where our State Fair is.) I won't bother posting the link of the aftermath.  It's all over the internet, and I don't want to hear it again.

The man complied with the officer to get his I.D., then tells the officer that he has a conceal & carry permit and has a gun in his car.  The officer freaks out and shoots the man in arm at least four time.  If you DO bother watching the video, listen to the officer screaming after the shooting.  The anguish and guilt in his voice tells you everything.

The result is that a (Black) man is dead, and the two officers involved will almost certainly be prosecuted.  Take a wild guess who one of the officers was??????????

How in HELL did that guy get hired by a police department when everyone who worked with him in the past knew he was a far-right racist?!?!?!?!  BTW: I checked this morning.  It would appear that the only smart thing he's done in ages was to delete his Facebook page after this incident. (Trust me.  That would have damned him for good.)


As of late, "Church" for me has been Friday mornings with some of the guys from Living Waters in Lakeville.  We have breakfast at a Perkins down there.


Whether you like it or not, racism is far from dead in this country.

If I were somehow able to go back in time and grab a Jew in exile during the time of Daniel & Jeremiah, and bring him here to America in the 21st century...or for that matter, from the time of Jesus and the Roman occupation, what do you think he'd see and say?

He'd most likely be impressed with the level of technology, for sure.  He'd probably like cars a lot...and deodorant and showers.  Then he very well might say something along these lines, "Wow, Babylon and Rome certainly have progressed with their material possessions, but they haven't fixed their pagan idolatry at all.  In fact, it looks like it's only gotten worse.  Meshuga!!!"


Americans like to pretend that we live in a "Christian" nation.  During this past 4th of July, there was a giant one page advertisement in the Star/Tribune talking about Jesus being America's god. (And I used a little "g" on purpose.) It was full of the various founders talking about the importance of religion to a society...as they were enshrining slavery into the Constitution.  There was also all manner of scripture taken out of context to prove the point that this advertisement was trying to make.

I think that if one of Jesus followers could see that, their reaction might be, "What are they talking about?  Americans worship Asherrah, Ba'al and Molech.  Can't you people see that?!?!?"

I love this country.  I believe it to be a force for good in the world.  However, I pray for it's repentance...although I'm not holding my breath.  This nation has a deep sickness to it's culture.  Our selfishness, sexual depravity, hedonism and gluttony, is no different what so ever than that of ancient Rome or Babylon.  We love our guns more than our neighbors.  We love our rights, but not our responsibilities.  We love our our individuality, but don't give a damn about "the least of these."

If you have the time, do a little research on the three gods above that were mentioned.  They were the ones that always led ancient Israel away from YHWH.  They're not dead & gone.  They are still very much alive.

It's been asked by others, "We live in the most progressive & enlightened society ever...or do we?  Do we still have the same old angry, demanding gods.  We just call them by different names?"

I often envy my friend Bobby.  He's a missionary in Nepal who works with Tibetan refugees.  Basically, he lives at a 1st century technological level.  No bells & whistles to blind him and the people he works with.  Hand to mouth every day, and he sees it.  He sees it.  He sees the spiritual warfare.  He can see the powers & authorities in action...and he can also see the power of Jesus...and his grace and mercy.


Maybe someday the church in America will take off it's blinders.  Our election this year is a joke.  I personally think it's a national embarrassment to the entire country.  Thankfully though, ultimately a "Believer" doesn't  follow a president.  We follow a King. (And he doesn't have to run those insipid campaign commercials!)


It was often noted of the early church that they were rather apolitical.  They prayed for their leaders as they were told to by Jesus.  But at the end of the day, they didn't care who was Caesar at the time.  They simply lived their lives as if Jesus was Lord, and was on his throne

Because that's what it is to live in Babylon.