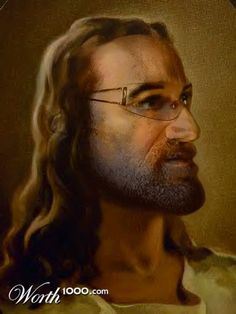 "Jesus went around saying he was the Messiah. That's why he was crucified. He was crucified because he said he was the Son of God. So, he either, in my view, was the Son of God or he was nuts. Forget rock-and-roll messianic complexes, I mean Charlie Manson-type delirium. And I find it hard to accept that whole millions and millions of lives, half the Earth, for 2,000 years have been touched, have felt their lives touched and inspired by some nutter. I just... I don't believe it."

"Christians are hard to tolerate, I don't know how Jesus does it...I'm one of them."
Bono


That's a funny picture...Jesus as Bono.  Bono tends to be a lightning rod for folks.  They either love him or hate him.  Whatever.  As far as rock stars go, he isn't out there doing what most of them tend to do.  At least he's using his fame to try and make a dent in world poverty & such.  Mick Jagger doesn't do that.  Neither does Robert Plant. (Both of whom I enjoy.) What are you doing with your fame?

A few years back, an old family friend came to town.  He was more of a friend to my folks.  I hadn't seen him since I was a little kid still living in Sacramento.  He was in town to go to a treatment center for an addiction of sorts.  It wasn't drugs.  It was something else that I won't mention.

He wanted to see Minneapolis.  So he and I took the light rail downtown to walk around.  He and I clicked pretty fast.  I like people in recovery.  Everyone needs a good old fashioned breakdown and/or humiliation once or twice in their lives.  Nothing like seeing reality when you're looking at it from the mud.  Nothing puts the concept of "Grace" in better perspective.


Actually, the truth is that I simply don't trust people that haven't been broken...
to the 25th power when it comes to "Christians."

Anyway, we had a great conversation.  He and I both have a healthy sense of skepticism when it comes to modern culture, politics and the church.  We both question the black & white certainty of politicians & theologians, AND to the blind worship of many of their followers.  We both prefer to wander the fields of gray and swim in the waters of nuance & questions.


We both follow Jesus in our own exceptionally imperfect way...

Apparently, while he, like most people, believe that Jesus existed, he was a just a good moral teacher. You know, just a really nice guy.


I have a problem with that.

"Having believed, you were marked in him with a seal, the promised Holy Spirit, who is a deposit guaranteeing our inheritance until the redemption of those who are God's possession."
Eph. 1:13&14

On most days, I'm not a Calvinist.  It kind of depends on what mood I'm in.  Even so, I do believe in the concept of "Eternal Security." (The idea that once you give your life to Jesus, you can never lose your salvation, no matter what dumb stuff you do after that.) When I read that passage from Ephesians, I can't come to any other conclusion.  I mean, how can I, a fairly dimwitted mortal, possibly snatch my salvation out of the hand of the supreme being of all creation?


I also take a lot of comfort in that thought,
considering the stupid things that I am so incredibly good at doing...

It's hard to say, really.  The best we can do is come up with some good arguments & theories for both sides.  As I mentioned earlier, I'm skeptical of those who have absolute certainty on matters such as this.  The God of the bible is a rather large fellow.  I'm not even a pimple on his butt.  So how am I to ascertain all of his ways?


What I will say is that these theories could be two sides of the same coin.


Growing up, I saw people in my church who seemed to talk the talk and walk the walk.  But I always got a weird vibe off of them.  Years latter, I would see that they have nothing to do with Jesus, and it came as no surprise to me.  Sometimes I'll get a reverse vibe off of people.  I'll see an unbeliever, and I'll get this weird feeling.  Sure enough, years latter they are happily following Jesus.

Is this "Discernment" in action?  Is it some form of creeping Calvinism in me?  I don't know.  What
ever God "Predestined" me to do before the beginning of time I guess. (Snicker.)

Maybe someone thought they were following Jesus, but their heart wasn't really in it.  Maybe they thought they were following Jesus, but it was a false Jesus of their own construction.  Lordy, Lordy, I see that everyday, all the time.  Jesus himself even warned about that repeatedly.  Maybe it was just a watered down, squishy Jesus that saves everyone even if they don't want to be, and repeatedly spit in his face.

I just don't know for certain about these sorts of things.  I worry about my friend though.  It's one of those situations where I simply have to "lean not on my own understanding," but simply trust that God knows what he's doing.

I'll tell you what I do know for certain...

Jesus said to her, "I am the resurrection and the life.  He who believes in me will live, even though he dies; and whoever lives and believes in me will never die.  Do you believe this?"  "Yes, Lord," she told him, "I believe that you are the Messiah, the Son of God, who was to come into the world."
John 11:25-27

Remember earlier on when I mentioned that my friend, like most people, believe in a historical Jesus, but that he was just a good moral teacher and a really nice guy?


Jesus doesn't give you that option.

You may have heard of the old argument; Jesus: Lunatic, liar or Lord.


He doesn't give you those options. 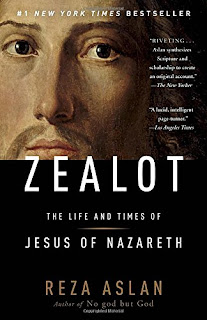 A few years back, this book came out.  The author, Reza Aslan, asserts that Jesus had the term, "Messiah," essentially forced on himself.  He never really claimed that title for himself.

I respect the author, but I question his scholarship.  Even more so, I question the obvious that every single interviewer of the author seemed to miss.  The most common reference that Jesus used for himself was "the Son of Man."

THAT IS THE MOST MESSIANIC TERM IN THE ENTIRE BIBLE!!!!

I should also add that every time either the disciples or other followers referred to Jesus as the Messiah, he never, ever corrected them...and it's fairly obvious that Jesus had no problem, what so ever, with getting in people's faces when he knew they were wrong.


To claim that Jesus didn't think he was the Messiah?


Jesus?  He was a great moral teacher.  To bad we can't live up to his teachings.  He was such a nice guy.  We need more nice guys like that.

Really?  A nice guy?  He went around claiming to be the Messiah.  He claimed the most central, theological name of God for himself. ("I am.")  He claimed to be the only hope for human salvation.


I understand the frustration with much of what passes for Christianity in America.  I've been hurt more by "Christians" than any other type of people in this nation.  I look at what passes for importance in the American church and just shake my head.  From Right-wing politics to Fundamentalist science quackery and horrible exegesis, I give a face palm.  Squishy, Left-wing watering down of orthodoxy so as not to offend the delicate feelings of a man who wants to wear a girl scout uniform while at the grocery store, or the lack of taking sin seriously, makes me grieve to my core.

So called "Christians" can make me itch like I'd just run through a briar patch clothed only in road tar on a July day.  But at the end of the day, you, me, WE, do NOT follow other Christians.  We follow Jesus.  So, blaming other "Christians" for why you reject Jesus?  I get it.  I do.  I understand it more than you can know.  But to use that as an excuse?


He doesn't give you that option.


I have to agree with Bono on this matter.  Jesus was either who he claimed to be or he was the biggest nut job that has ever existed.  "Nice guys" do not run around claiming to be God.  "Nice guys" do not claim to be the Messiah.  Great moral teachers do not make the claim that they are the only hope for human salvation.


Jesus was either God in the flesh, mingling with the fallen humanity that he loves and wants to redeem, or he was craziest "(Bleeeeeeeep)" to ever walk the earth!!!


To consider & entertain any other thoughts?