Every tribe, every tongue, every tastebud. 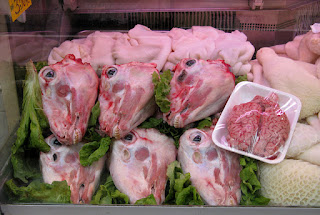 "When the hour came, Jesus and his apostles reclined at the table.  And he said to them, "I have eagerly desired to eat this Passover with you before I suffer.  For I tell you the truth, I will not eat it again until it finds fulfillment in the kingdom of God.""
Luke 22:14-16

"After this I looked around and there before me was a great multitude that no one could count, from every nation, tribe, people and language, standing before the throne and in front of the lamb."
Rev. 7:9

Nice picture, eh?  That one's actually pretty tame.  I was looking for one from a meat market in the old city of Jerusalem.  Way back when, I went to school there.  I remember my first day wandering around the old city and seeing skulls of sheep & goats hanging on the wall, all skinned but with the meat & eyes still attached.  I thought I had wandered onto an album cover for the Rolling Stones or Black Sabbath. 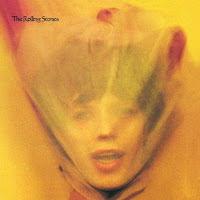 We had a pet goat at the school.  It had wandered through our rather wide metal gate, but couldn't figure out how to wander back out.  A goat makes a very cool pet, actually.  We named it "Schwarma," which is Arabic for "Spiced Meat."

Take a wild guess what became of it after it had matured?

Hey, we donated it all to a local orphanage.

I still dig goat meat and Middle Eastern food.  As I understand it, if you go to a Beduin feast it's usually some type of massive goat platter, complete with bowls of goat soup with little hooves sticking out.  If you are the guest of honor, the head sheik will pop the eyeball out of the goat's head and pop it in your mouth.  YUMMY! (Never had the chance to experience that.)

I doubt there is a single food out there that I won't try at least once.  Just because something is different or unusual, doesn't mean it's bad.


I'm a butcher.  I work in the meat department of a Co-op in the Twin Cities.  I love what I do.  I like the people I work with.  We're all "Foodies."  We talk about meat, produce, fish, and recipes all the time with each other and with customers.

In fact, this past week I created a new brat/sausage, in honor of a college kid who works there and gave me the initial inspiration.  I call it "Prince of Wales Lamb Sausage."  It is ground lamb mixed with leeks, carrots, potatoes and garlic.  Like I said, I love what I do.  It's fun. 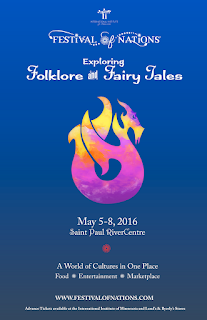 Last Friday, the Festival of Nations was in town.  So I took my sister over to see it.  They pick a theme for the festival and build exhibits around that theme.  They also have music, dance and lots of interesting foods.  The weirder, the better, as far as I'm concerned.

(You might be able to figure out why, hard as try to work out, I simply cannot get 6-pack abs.)


So anyhoo, when I was there it got me thinking.  I love other cultures.  I wish I could do a lot more traveling than I have.  It fascinates me.

When I see other cultures, I get a glimpse of what heaven will be like, and what the earth will be like when Jesus' restores everything.

The Western mind is soaked in Greco-Roman thoughts and world views, which don't generally line up with the bible very well.  This translates into how we view the afterlife.  The Greeks thought that the body was a bad thing.  A prison of sorts.  Go read Plato's thoughts on The Cave analogy.

Or I suppose you could just watch this video...


The goal for the Greeks was to escape the body and just be a spirit.  That was what was pure & true.

This is why you will see images of heaven with angels, harps and clouds.  I should state for the record that if that is what heaven is like, I don't want to go.  Also, it simply isn't biblical.

To the ancient Hebrews, they eagerly awaited a bodily resurrection.  Check out Martha's conversation with Jesus before he resurrects her dead brother in John 11.  Also, in all three accounts of Jesus' transfiguration, both Moses & Elijah appear in the flesh.  Apparently, what ever heaven may be like, you do get to walk around in the flesh.  Certainly, in the restored earth you get a physical body.

The idea that there wouldn't be some type of physical existence in the next world was completely foreign to the Jews of Jesus day...except for the Sadducees, I suppose.

It is also interesting to notice that the bible does hint strongly of joyful feasting in both places, along with numerous other physical activities.


My dad tends to fuss a bit over the thought of eating in heaven.  "Will we have to poop" he'll ask me?  I just retort that we'll have to get the compost from somewhere.

I guess my thought is that why would God give us these sensations of pleasure in this life, only to take them away for good in the next one?


When I think about the restoration of all things under the new & perfect order that Jesus' reign will bring about, I get excited at all of the new things I'll be able to experience & learn.  Think of all the cultural flavors, music, art and so on, that will be brought to the table.  It's mind blowing!


Personally, I'm of the opinion that Jesus will request me as one of his personal salsa makers.  I can't prove that biblically, but the Spirit of the Lord has anointed me with much skill with hot peppers and other spices.

Also, call it blasphemous all you want, I'm going to challenge Jesus to a slider eating contest.  If I'm lucky, maybe I'll be able to get a 6-pack with the new/perfected body...