The Tactics of Grace 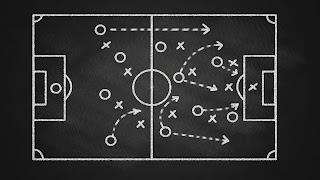 "So in everything, do to others what you would have them do to you, for this sums up the Law and the Prophets."
Matt. 7:12

"Jesus entered Jericho and was passing through.  A man was there by the name of Zacchaeus; he was a chief tax collector and was wealthy.  He wanted to see who Jesus was, but because he was short he could not see over the crowd.  So he ran ahead and climbed a sycamore-fig tree to see him, since Jesus was coming that way.
When Jesus reached the spot, he looked up and said to him,“Zacchaeus, come down immediately. I must stay at your house today.” So he came down at once and welcomed him gladly.
All the people saw this and began to mutter, “He has gone to be the guest of a sinner.”
But Zacchaeus stood up and said to the Lord, “Look, Lord! Here and now I give half of my possessions to the poor, and if I have cheated anybody out of anything, I will pay back four times the amount.”
Jesus said to him, “Today salvation has come to this house, because this man, too, is a son of Abraham.  For the Son of Man came to seek and to save the lost.”
Luke 19:1-10


Let's say that your out taking a walk some where.  You're minding your own business.  Up ahead, you see a group of folks holding signs.  As you get closer, you begin to be able to read the signs.  They read something along the lines of, "You suck!"  "YOU are a horrible, messed up jerk."  You need to join our club, or you be a complete and total loser FOREVER!!!!"

As you get closer, this group begins to turn it's attention to you.  A few of them even start walking to you to hand you leaflets that explain your worthlessness.  They tell you that they care about you, they don't want you to be the jerk that you are.  They want to help you to stop being such a loser.

A quick aside: This actually happened to my and two friends from Bethel Seminary.  We were going to see Neil Young and Crazy Horse in Minneapolis.  For some odd reason, there were people outside the Target Center carrying signs that basically said, "Turn or Burn!"

We found this to be odd, because it was Neil Young and NOT Bette Middler...in which case I would have fully understood.

Anyway.
How receptive might you be to their message???? 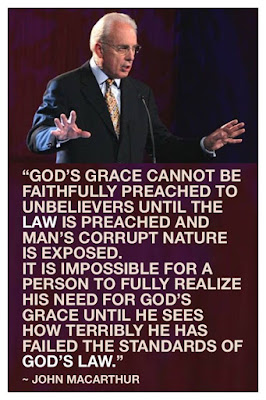 This morning, a friend of mine had "Liked" this on Facebook.  I didn't think about it much at the time.  However, as the morning wore on, it began to gnaw at my brain for some reason. (Mostly because I think it had to do with John MacArthur.)

MacArthur's not a bad guy.  As far as understanding the basic essentials of Christianity, he a good resource.  However, after that you better know what you're getting into.

He espouses "Dispensationalist" theology, which has some merits, but can also quickly descend into all sort of kookery. (I.E. John Hagee and his blood moons, or those awful "Left Behind" movies.) He doesn't believe that catholics...or probably orthodox christians can be saved. (Which pretty much cancels out the entire church up until the Reformation.)

He has also earned a solid reputation for not exactly being the most gracious or merciful guy, even though his catch-phrase is "grace to you."

I've often believed that the theology we embrace has as much to do with us and our personalities, as it does with what the bible says.  That's something I try to be on guard about at all times, because I can easily wish that bible and God would do what I want them to do...and that rarely works out very well.

At any rate, in this instance I think it's absolutely true, because by and large, what MacArthur is saying simply DOES NOT match up with the tactics that Jesus used when it came to dealing with sinners.  Jesus never, ever confronted sinners with how sinful they were, or how they could never get the law right.  He never berated, condemned, or told anyone how unworthy they were.  You can't find it in the bible, and I dare you to prove it otherwise...

I'll wait a moment while that rolls around in your head.

I was wrong.  Jesus actually DID condemn certain sinners, didn't he?  At which specific group of sinners...and we are all sinners...did Jesus save his most blasting condemnations for?

That's right.  The professional religious class.  He routinely tore those guys a new one almost every chance he got.


Something to think about...


The thing is, I'm not in any way, shape or form trying to minimize sin and the sinful nature, nor what it does to people.  I struggle with my own crap every single day.  I hate my sin.  I hate the fact that I'm really, really good at it.  I am fully and completely aware of it.

And I think that most people, including non-believers are too, on some sort of level, anyway.  Most people I know already realize that they are messed up on some level.  They might not understand what "Sin" is, but they know they have issues to deal with.  They don't need someone to come along and shove it back in their face like a puppy who just pooped on the carpet.  They need someone to come along side them and extend love and mercy.  You know, kind of like Jesus did with Zacchaeus.

It's also been my experience that, other than Donald Trump and his supporters, the folks who have the least awareness of their sins and sinful nature are my fellow Believers.  It's not exactly a secret that outsiders view us as being judgmental and hypocritical.

Recently, I've been wanting to write about the whole Transgender thing that now seems to be becoming more popular.  I've read and listened to some bits on this that really disturb me to my very core.  My soul tells me that this sort of self-mutilation is wrong on every level and has deep spiritual warfare roots to it.

However, I'm having trouble writing anything due to the simple fact that I hardly know anyone for whom this is an issue.  I've only had two trans acquaintances through my job, and both of them have left.  I never got the chance to develop the friend relationship that I wanted.  I want to hear their stories. I want to understand THEM,...their fear, guilt, shame, etc.  I admit it.  I can't wrap my head around something like this.  Until I do, I think it unfair of me to say too much on this issue one way or the other.


And that's the crux of the matter.


If you look at the character that Jesus displayed in the Gospels, you rarely see him saying much to the "Sinners."  He talked a lot to his disciples and followers.  He certainly had some good speeches and buffets for large crowds.  However, there simply isn't much recorded of what he had to say when he was sitting down for a meal, or being alone with those sinful types...be they hookers, traitors or what not.  All you see is that he hung out with them when everyone else looked down on them.

That very act on the part of Jesus seemed to have some amazing impacts on those folks.  It spoke volumes without a word.


"The Silence is Deafening," is a favorite quote of one of my old seminary professors.


Maybe Jesus knows something we don't.

Islam?  Get yourself some muslim friends.  Atheists?  They're great to have extended conversations with.  Buddhists?  You might learn a thing or two about materialism in America from them.  Gays?  Unless you have some as friends, you have no business speaking about them. (Besides, I had one once who was the BEST to go shopping with.  I have no fashion sense.  He had it in spades.) In fact, unless you are going to expend a bit of effort to get to know various people, what business do you have saying anything to them?  It's great to pontificate in public, but the final and ultimate meat of the Gospel is found in relationship.  That's where the rubber meets the road.


Maybe Jesus still knows something that we, you and I still haven't figured out.