The Last Trumptation of Christ... 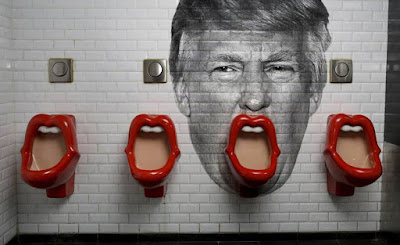 But mark this: There will be terrible times in the last days.  People will be lovers of themselves, lovers of money, boastful, proud, abusive, disobedient to their parents, ungrateful, unholy, without love, unforgiving, slanderous, without self-control, brutal, not lovers of the good, treacherous, rash, conceited, lovers of pleasure rather than lovers of God - having a form of godliness but denying it's power.  Have nothing to do with them.
2 Timothy 4:1

For the record, this post is going to be more of a rant than anything else.  I just need to get some stuff off my chest.

Don't get me wrong.  I enjoy the game of politics.  I have ever since I was a little kid.  I'm a nerd.  I am.  I even ended up teaching Civics for years.  So it's a big part of me.  However, it isn't my religion the way it is for so many...christians in particular.

To be clear, I was (Emphasis on "Was.") a life-long Republican.  I still tend to lean that way.  However, I will never, ever, under any circumstances be "Partisan" again.  In fact, I would encourage other Believers not to be partisan either.  I'll explain why in a bit.

Back in 2008 when Obama was running for office, I voted for McCain.  I knew that Obama was going to win, and I wasn't freaked out by that.  I just have always admired John McCain.  Simple as that, really.  HOWEVER, what happened after Obama was elected literally blew my mind.  Like I said, I've followed politics since I was a kid.  I was used to hearing crazy stuff come out of the mouths of the opposition.  I remember hearing that Reagan was the anti-christ, then Clinton, blah, blah, blah.

But when Obama got elected, it was as if all the doors of the asylums were thrown open.  The kooks and crack-pots came out of the woodwork.  Within a year, I recall reading various reports from the FBI and Southern Poverty Law Center pointing out that "Hate Groups" had blossomed 300% and more.  The TEA Party sprang out of nowhere, fueled by the Koch Brothers and Glenn Beck, and conspiracy theories began to grow like weeds.  Now we had a Muslim Marxist President from Kenya trying to take away our precious guns while FEMA sets up death camps for christians.

BTW: Want to have some fun?  The next time some willfully ignorant moron throws around the terms "Fascist, Marxist" or "Socialist," immediately ask them for the definition. 19 out of 20 times they wont know it.  They just know it's a handy insult because Limbaugh or Maddow can fart it out of their mouths.

My reaction to all of this lunacy was to make a complete break from any of what began to pass for "Conservative" or "Republican."  I thought, "These guys are nuts.  I want nothing to do with them.  I guess I must be a Liberal."  And I stuck with that for awhile.

Turns out, the far left is just as goofy as the far right.  I have a friend who loves to preach to the choir on Facebook.  Even this morning, his usual screed was up and running.  I am of the opinion, based on what he puts forth on a regular basis, that he is one step away from saying that all Republicans want to tear the beating heart of infants from their chests and drink the blood in front of their parents.  I don't even bother to look at his stuff anymore.  I just scroll on past.

So what does this make me?

It doesn't make me anything.

I'm not a "Moderate."  If you want to give me a worldly label you could call me a pragmatic realist.  Sometimes you need the government to do some stuff, other times just leave it to the free-market.  Considering the state of our national infrastructure, roads, bridges, power lines, etc., I think we need a massive investment...and privatizing our interstates is not the way to do it.

But you almost never hear a candidate talk about that.  Why?  Because it's not sexy.  It doesn't go "Boom," or make sand glow...to the glory of God.  It's must more fun to make stuff up as you go, like building a giant wall on our border and forcing another sovereign government to pay for it. (Damn Canadians!)

Do not conform to the pattern of this world, but be transformed by the renewing of your mind.
Then you will be able to test and approve what God's will is -
his good, pleasing and perfect will.
Romans 12:2


When I hear a Believer say that they are a Liberal or a Conservative, what I hear them say is that they are only half a christian.  Sure they follow Jesus, but they really, really want to be defined by an earthly label, too.

The bible never defines anyone by a worldly label.  You're not a conservative or a liberal.  You're not gay, bi, straight.  Your not even primarily to be known by your nationality.  For starters, you are the image barer of God...even if you don't believe in God.  But if you are a Believer, well, you start out as a sinner saved by grace, and you end with being the righteousness of Christ, his joint heir, a child of the king.

That sounds a whole lot better to me than some stupid political or economic ideology created by flawed, fallen, imperfect people...or for that matter, letting yourself be defined by the latest social science fad, that will be gone in 50 years, that allows you to be six different genders at once. (Hey, whatever might be going on between yours ears, turn that over to Jesus.  Your plumbing doesn't lie.)


If you go by the bible's definitions, you see the world differently.  Instead of following Man's ideas and philosophies, you let Jesus renew your mind.  And that's why it's tough to follow Jesus and be very partisan.  For starters, to be partisan you have to shut of at least half of your brain.  Your side is always right, their side is always wrong. (I thought you were supposed to do away with that type of thinking after Middle School.) It's ridiculous!


"To be biblically consistent, you have to be politically inconsistent."
Ricarcd Cizik


So what does any of this have to do with a picture of Donald Trump's mouth as a toilet bowel? (Other than the obvious.)

Since the end of the 70s, the church in America has become increasingly tied to far-right politics.  The Left has some of it, too, but not nearly as much as the Right does, for whatever reason.  This isn't even remotely good for the church.  All you had to do was watch the big political shin-dig in Iowa a bit ago to see that Christians are lumped in to the cause of the far-right.  This means that those outside the church think that to follow Jesus, you have to hold to a particular political stance.  That is NOT the good news of Jesus.

I am convinced more and more, that if I took the average American christian and dropped them off in Nepal with my friend Bobby (A missionary with Tibetan refugees) they would have almost no frame of reference to follow Jesus.  They wouldn't know "How" to be a Christian.  They'd start looking for the local chapter of the NRA or TEA Party.  The concepts of "Liberal & Conservative" would have no meaning in that context.  They would be lost.  Bummer.

It's been pointed out that the majority of Donald Trumps supporters are Evangelical Christians.  A man who goes through wives the way some men go through socks.  A man who preys on the vulnerable with his casinos...

Fascism: "A political ideology that encompasses an extreme form of nationalism, militarism, authoritarianism, usually mixed with xenophobia and the exploitation of the fear of outsiders."

(Yes, I just threw up in my mouth a little bit)


This man walks onto Liberty University and can't even read or pronounce the bible remotely correctly, and is endorsed by Jerry Falwell Jr.  This man is endorsed by Sarah Palin, Rick Santorum and Mike Huckabee, who all claim to follow Jesus.  This man...

I know what your thinking, Santorum & Huckabee didn't actually say they endorsed Trump.  However, when you walk onto a Trump's private stage while smiling and waving as you are in the process of shutting down your own campaign...


The only saving grace in any of this is that some of my far-right friends are beginning to notice that something is terribly wrong in the church and with politics when this is happening. 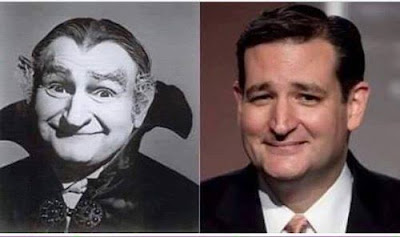 It has been said many times that a "Fundamentalist" is a person whose arrogance is mingled with ignorance. This applies to both religious and purely secular forms of fundamentalism.  Militant Vegans are fundamentalists in their own meatless way. (And boy, are they easy to beat up!)

Teddy from Canada is both a religious AND political fundamentalist.  He is very certain that his campaign is divinely directed.  He is doing God's will, and don't try to tell him otherwise.  Like when he shut down the government a few years ago, because he didn't get what he wanted.  He spent a portion of his filibuster speech quoting the militant, Jesus-hating, atheist Ayn Rand.  His shut down cost American business roughly $20-24 billion.  Clearly, this was all God's will.


Here's a thought that many politicians don't seem to understand.  In a "Democracy," you don't get everything you want.  That's why you have to do this thing called "Compromising."  You see, that's how a representative democracy works.  When you get everything you want, all the time, that's what's called a "Dictatorship."  Since Ted is doing God's will, I think he would be very happy being a dictator.


Take a wild guess at who the biggest supporters of Ted are?

For a man who claims to follow Jesus, I don't recall anyone with less humility than Ted Cruz.  The only thing a follower of Jesus should be certain about is that Jesus is who claimed to be, the son of God, the Messiah, the only hope for humanity.  After that, we better have a decent does of humility.  Ted has none of that.

I won't bother rehashing too much of what's already been said, but here is an excellent article written by the Conservative, David Brooks...


Then there is the charming character trait of Ted's where he mixes his arrogance with his very, very willful ignorance.  He puts a cherry on the Sundae, too, by being incredibly rude. (BTW: You can read the transcript, but it's even better if you actually listen to it)

By the by, here's a link to N.A.S.A.s site which Ted apparently can't or wont read, saying that Ted is full of moist, steamy, you-know-what...

Not to fret, all of this is obviously God's will.  How do I know this?