Fear & Loathing in Immigration (And of Refugees) 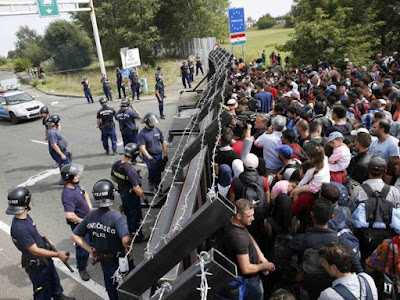 He defends the cause of the fatherless and the widow, and loves the foreigner residing among you, giving them food and clothing. And you are to love those who are foreigners, for you yourselves were foreigners in Egypt.
Deuteronomy 10:18-19

Now this was the sin of your sister Sodom: She and her daughters were arrogant, overfed and unconcerned; they did not help the poor and needy.
Ezekiel 16:49

"So I will come to put you on trial. I will be quick to testify against sorcerers, adulterers and perjurers, against those who defraud laborers of their wages, who oppress the widows and the fatherless, and deprive the foreigners among you of justice, but do not fear me,” says the Lord Almighty.
Malachi 3:5
"For I was hungry and you gave me something to eat, I was thirsty and you gave me something to drink, I was a stranger and you invited me in, I needed clothes and you clothed me, I was sick and you looked after me, I was in prison and you came to visit me."
Matthew 25:25-36 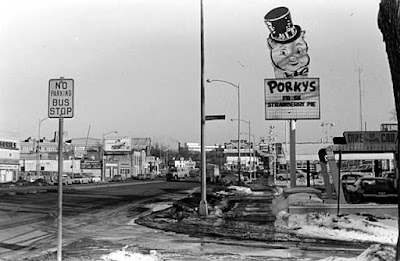 My family moved to Minnesota in 1978.  The picture to the left is what St. Paul looked like when we first got here.  As you can see, back then our state capital didn't even have color to it.  Everything was black, white or gray.

In fact, at that time only the old Met stadium and airport had indoor plumbing.  You can imagine the waiting lines... 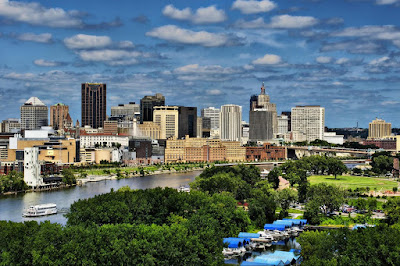 As you can see, now the capital city has color...and indoor plumbing is in roughly 81% of all buildings.

Rumor has it that sometime within the new year, we will get this new device called a "Wireless Receiver" to replace Semaphore and Aldis Lamps as the means for communicating over long distances.

Shortly after my family moved to Minnesota, the Vietnamese "Boat People" crisis exploded.  The communists were purging Vietnam of all the ethnic Chinese.  Needless to say, plenty of Vietnamese took the chance to get out, too.  So, tens of thousands of people took to the ocean in leaky boats to get away from the less-than gentle hand of communism.

Jimmy Carter was President at the time.  His faith compelled him to do something. (Not to mention the fact that the U.S. owed these folks big time) So America began to take in scores of S.E. Asians.  In Minnesota, Al Quie was Governor.  He has a very strong faith.  He thought Minnesota's infrastructure was solid enough to handle a few, so he invited tens of thousands to come from a hot and humid climate to resettle in the frozen tundra.


One of the smartest moves we've ever made!!!


The new folks who got off the boats were largely peasants.  They didn't speak the language.  Some had never used electricity before.  As any immigrant group before them, they caught plenty of grief from the children of previous immigrants who had forgotten their own history.

One of the more amusing stories I heard, came from a pastor in St. Paul who worked with the new refugees.  Apparently, many of the dogs and cats in the neighborhoods where the new folks settled began to disappear.  How could you say "No" to lunch when it walks right up to you while wagging it's tail?


Today, these folks have fully integrated into Minnesota life.  St. Paul has one of the largest communities of Hmong in the country.  They have a massive sports event every summer in Como Park.  Really good quality S.E. Asian restaurants are everywhere.  In particular, University Ave. in St. Paul is completely changed from when we first moved here.  It used to be mostly industrial bland & gray.  Today, it is vibrant, trendy with awesome places to eat.


And it's mostly due to these peasant refugees.
peasants...


There's one catch.
They are mostly Arab, and almost entirely Muslim.


"Hi ------, everyone is entitled to their opinions (free speech), but the ignorance of people who speak about the refugees is wrong. I suspect those that support this misguided policy have never been to the Middle East. Never saw women beat, children molested. They will kill all that is not Muslim. Those refugees are a ticket to spread terror and if they die the Muslim Clerics don't care. These people are animals and until they clean up themselves they should be banned from all countries. Syria is in a civil war between three factions. Let them sort out their own mess. They all have one thing in common they want The US destroyed. If there are "good muslim" countries why do they support all the terrorist factions?"

The above statement was sent to a friend of mine via Facebook this morning.  I could go into a detailed critique of it and explain the fallacies, ignorance and even arrogance demonstrated in it, but I wont bother.  Instead, I will leave it to you.  Simply tweak the wording a bit.  Substitute the word "Muslim" for "Irish, Chinese, Catholic, Italian, etc.", and have some fun on your own.  It's pretty much the story that has been told about immigrants and refugees in this country since we began.


(Oh, for the record, I actually HAVE lived in the MIddle East.)

I could point out that the guy who owns the station where I buy my gas is a Lebanese Shiite, and that one of the kids who works for him is a Muslim who pays on the local high school team.  Other than not embracing the "Joy of Bacon," they're pretty much no different than I.  I could also point out that neither of them have tried to blow up my car. (Not yet, anyway.)

Furthermore, I could go on to point out that the largest perpetrators of terrorism in the U.S. have been white people, usually acting in the name of some warped version of christianity.


I could point out all of that.  But I'm not going to bother.
You could argue for days & days on this subject.

Instead, I would like to offer what I consider to be a "Jesus View" on this topic.


"And this gospel of the kingdom will be preached in the whole world as a testimony to all nations, and then the end will come."
Matt. 24:14

At the moment, it's rather difficult to talk about Jesus in the Islamic world.  You tend to get killed if you do.  Not that this has stopped Jesus in any way.  I've heard story after story of him visiting people in dreams, etc. (Look some of that up yourself.) A Believer should never assume that God needs you in any way, shape or form to get his job done.

So let's say that you are God.  You're thinking to yourself, "Hmm, I really want these people over there to get to know the real me.  But they tend to get killed by the other folks there if they do.  Oh, I have an idea...I'll bring them over to this other country where they can hear about the real me and not get murdered."


Make no mistake folks, I am convinced beyond a shadow of a doubt that Jesus is the only hope for fallen humanity.  "Salvation is found in no one else, for there is no other name under heaven given to men by which we must be saved." (Acts. 4:12) All other faiths are false paths.

But that gives me no right to belittle or disrespect Muslims, Buddhists or anyone else.  Instead, it gives me the responsibility of being Jesus to them.  That is the mission of the church.  We are to be his hands and feet.


Over 10 years ago when I was on the couch trying to heal from a breakdown, the therapist told me of his vision of a harvest for Jesus' kingdom right here in Minnesota in the Somali community.  "We can't send Jesus' followers over there, so God's bringing them over here to us."  I think he's absolutely right.  Now I am hearing pastor after pastor saying the same thing.  God is at work in all of the horror of this world.

God is using the tragedy of man-caused suffering to act.  He is desiring a response from the church.  He is bringing a lost group of people into a place where they can hear about his grace in safety...assuming that his followers there respond positively.  Will we?

It hurts me to my core when I hear people acting in the name of Jesus, and then trying to shut the door on muslim refugees.  Even Franklin Graham has lost any respect I had for him for the way he talks about Muslims.

Are we that afraid of terrorism in the U.S. that we will say "No" to them?  More people in this country have been killed by drunk drivers every-single-year than have be killed by terrorists in the past 30!  In my opinion, the biggest issue for christians in America is our desire to live in fear, and our lack of actual trust in the resurrected Christ.

Sometimes I despair over the church in America.  We have allowed ourselves to be so co-opted by the culture that we let ourselves think like Americans first...and maybe a little like Jesus down the road.

What I want to say to the church in America is this; Jesus is the visible image of the one, true God.  He never misses, he always wins...and believe it or not, he has your back.  He wants you to join him in what he is already doing.  He wants you by his side so that you can see his glory and share in his joy.  He says that he loves you, and that there is nothing to fear.  He really and truly knows what he's doing.


Dear American Christian.
There is this guy named Jesus.
You should get to know him.


I hope that the U.S. allows in tens of thousands, if not more, from Syria, Iraq, Afghanistan.  I hope many of them will move to Minnesota.  Jesus will have his harvest from the Muslim world.  I want to be there to see it.