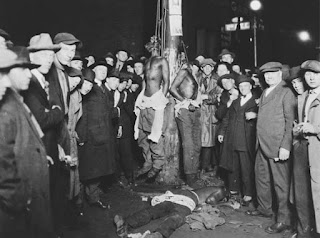 "They're selling postcards of the hanging, they're painting the passports brown.  The beauty parlor is filled with sailors, the circus is in town.  Here comes the blind commissioner, they've got him in a trance.  One hand is tied to the tight-rope walker, the other is in his pants.  And the riot squad they're restless, they need somewhere to go.  As Lady and I look out tonight, from Desolation Row."Bob Dylan, "Desolation Row."
"Our new Government is founded upon exactly the opposite ideas; its foundations are laid, its cornerstone rests, upon the great truth that the negro is not equal to the white man; that slavery, subordination to the superior race, is his natural and normal condition."
Alexander Stephens, Vice President of the Confederate States of America.


This post isn't so much directly related to the bible or Christianity, per say.  It's just something that has been weighing on my mind for a while.

I live in Minnesota.  From May through October, it's a great place to live.  It's a fairly Liberal State, which has it's good and bad sides.  It has more lakes than you can shake a stick at.  Great medical and education.  Over all, it has a great quality of life.

It also has a dark past.

That photo at the top?  That's from Duluth.  Duluth is Minnesota's answer to Portland and Seattle.  In June of 1920, there was a traveling circus in town.  Those black men hanging in that photo were accused of raping a white woman on the circus grounds.  They were arrested.  A mob formed.  They broke in to the police station.  Etc.


They made postcards of the occasion.


The city tried to forget about it.

Minnesota also celebrated another sad event a few summers ago.  Government agents had been cheating the Dakota indians out of food and money for a long time.  This led to an uprising among the Dakota indians along the Minnesota river.  When it was over, Minnesota had the largest mass hanging in national history.  We then enacted ethnic cleansing, and pushed that particular tribe out of the State, with death being the punishment if they ever returned.

My folks are proud of their heritage.  We love the Minnesota Vikings, pickled herring, all manner of Scandinavian pastries, and Ikea.

Take a wild guess what my ancestors used to do?  That's right, they used to sail up and down the coasts of England and France, raping and pillaging.  Monasteries were easy targets.  Nun and monks were usually unarmed.

Those Vikings were tough and brave.  I don't brag about that, nor do I carry a broad sword around in public.

I know of an army that was one of the best in the world.  The soldiers were very brave.  Their officers were much better and smarter that the U.S. officers.  They were fast, efficient, tough...and God was on their side because their belt buckles said so. 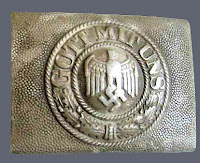 Unfortunately, they fought for a lost cause.  Their leaders at the national level were evil.  The brave soldiers who fought and died were used as pawns for an evil game.  They were the Wehrmacht of Nazi Germany.

Those who survived would often get together to remember how brave they were. (Just like our guys at the local VFW.) I doubt many of them like to think about what they were fighting for in the end.

So last week there was a terrorist attack in South Carolina.  A white supremacist murdered 9 worshipers during a bible study.

Jon Stewart is often a "Prophet Outside the Church."  He had this to say...

I hope he's wrong, but I feel that he is mostly right.  Americans wont learn much at all from this event.  We love our guns more than we love each other.  We love our violence.  We love our "Freedom." (What ever that exactly means)

And I say that as a guy who has owned guns since I was 14, and I also love Tarantino movies.

Last Friday, I was driving in St. Paul.  The BBC was on the radio.  They were playing the brief speeches that the survivors were saying to Dylan Roof, the killer, as he was being arraigned in court.  Every single one of them that I heard offered forgiveness to him.  One of them, I don't recall his name, told him that he needed to repent, and "Give your life to the only one that matters, Jesus."

I had to pull over to the side of the road because I started bawling.  I don't think I have that kind of grace or mercy inside myself.

So maybe there is some hope.  At least for those with eyes to see and ears that will hear.

Alexander Stephens was the Vice President of the Confederacy.  He is rather famous for his giving the "Cornerstone Speech."  He never bothered to write it down a head of time.  He spoke from his heart.  He told the world exactly what the new Confederate nation was all about.

"Our new Government is founded upon exactly the opposite ideas; its foundations are laid, its cornerstone rests, upon the great truth that the negro is not equal to the white man; that slavery, subordination to the superior race, is his natural and normal condition."
https://en.wikipedia.org/wiki/Cornerstone_Speech


The sad fact is that in most respects, the confederacy DID win.  In 1876, the federal troops were pulled out of the south.  The same old leaders came back into power, and Jim Crow laws were put in place.  America had it's own version of Apartheid.  Is that a heritage to be proud of?


Many people like to pretend that America and other countries are "Christian" countries.  There are some people out there that like to think that the Holy Spirit helped write the Constitution.  America enshrined slavery in our Constitution.  Is that a heritage to be proud of?

It strikes me that repentance is a central part of following Jesus.
You need to confess your sins.
You need to turn away from them and go the other way...
because that is the direction that Jesus is going.

That is a heritage to be proud of.