The death of the "American" church. 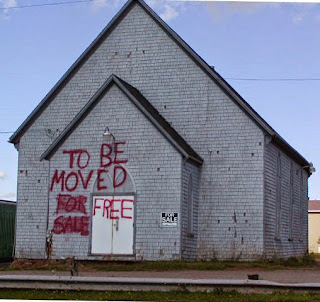 “Watch out for false prophets. They come to you in sheep’s clothing, but inwardly they are ferocious wolves.  By their fruit you will recognize them. Do people pick grapes from thornbushes, or figs from thistles?  Likewise, every good tree bears good fruit, but a bad tree bears bad fruit.  A good tree cannot bear bad fruit, and a bad tree cannot bear good fruit.  Every tree that does not bear good fruit is cut down and thrown into the fire.  Thus, by their fruit you will recognize them.
“Not everyone who says to me, ‘Lord, Lord,’ will enter the kingdom of heaven, but only the one who does the will of my Father who is in heaven.  Many will say to me on that day, ‘Lord, Lord, did we not prophesy in your name and in your name drive out demons and in your name perform many miracles?’  Then I will tell them plainly, ‘I never knew you. Away from me, you evildoers!’"
Matt. 5:15-23

Syncretism is the combining of different, often seemingly contradictory beliefs, while melding practices of various schools of thought. Syncretism involves the merger and analogizing of several originally discrete traditions, especially in the theology and religion, thus asserting an underlying unity and allowing for an inclusive approach to other faiths. Syncretism also occurs commonly in expressions of arts and culture, as well as politics.


Sectarianism/Sect is a subgroup of a religious, political or philosophical belief system, usually an offshoot of a larger religious group. Although in past it was mostly used to refer to religious groups, it has since expanded and in modern culture can refer to any organization that breaks away from a larger one to follow a different set of rules and principles. 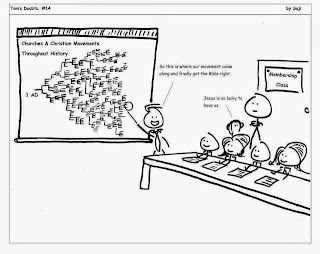 Both are really, really bad!!!


A day or so ago, this story ran on NPR.

The Pew survey found what anyone paying attention already knew.  America is becoming more and more secular.  People identifying as "Christians" are on the decline.

This morning I woke up to some interesting responses.  The first post is written by a fairly conservative evangelical.  The second is from the perspective of someone a bit more liberal.  I like them both.
http://www.russellmoore.com/2015/05/12/is-christianity-dying/

America is no longer a "Christian Nation."

I would argue that this is great news for the church in America!

And in a little bit, I'll explain why...


Before you are inclined to hit me with a bat, let me make a few things painfully clear; I LOVE this country!  I am fortunate and blessed to have been born here.  I've lived in and visited other countries, and I understand very well how good we have it here.  I believe that America is largely a force for good in the world.  Like I said, I love this country.

The various countries of Europe thought that they were christian nations.  That's why they tied the various denominations to the power of the state.  Then they promptly persecuted and went to war with those who were of different denominations.  Hurray!!!

The result today is that Europe is, at best, agnostic, if not down right atheistic.  I lived in the Czech Republic for a while.  It was there that I met my first real atheists. (I'm used to the pop phenomenon brand of atheism in the U.S., and I find it to be not very well thought through.) The Czechs bore a huge brunt of the various religious wars back in the day.  When the Hapsburgs ruled them, they used the catholic church as enforcers.  So, is it any wonder that the Czechs would be a bit skittish about religion?

Here in the U.S. I hear people say that the Fathers of our country founded America on biblical principles.  I think that would come as a surprise to Thomas Jefferson and the rest.  While a few of them certainly were Believers.  Most of them were simply Deists/Theists.  That was the school of thought at that time.  "Sure, there is a god.  He got everything going and is now off doing something else."

The Founding Fathers were products of the Enlightenment.  That's what they based the Constitution on.  Not the bible, I can promise you that.


Getting back to Syncretism and Sectarianism; usually those two are the opposite ends of each other when it comes to the Gospel.  You either sell out to the general culture, or you separate yourself.  However, the "Americanized Church" has figured out a way to do both at once. (BTW: There is a massive difference between THE church and the Americanized church.)

The Americanized church has bought into the mythology of this being a christian nation.  As a result, it has allowed itself to be co-opted by secular, more often than not Right-wing, politics.  Politicians aren't always stupid.  If they can get votes by spraying a little Jesus-gloss on their platform, they'll do it.  And the sheep will follow.

So, the Americanized church sells itself to the idolatry of a national myth and has achieved synchronization with the general culture.  Now that it has sold itself, it then goes in to a form of sectarianism and creates an Us vs. Them mentality.

I can't even remember how many times people assume I am a far-right, so-called Conservative simply because I am a Christian.  I've seen more than a few stunned looks when I tell them I am strictly independent.  Even more when I tell them that I kinda like President Obama.  "I thought you Christians hated his guts.  I've seen your T-shirts calling for his death." 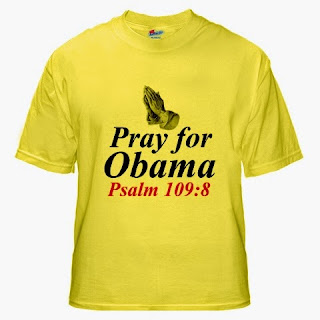 < - Like this one.  Makes me wonder who's making a few bucks off of that in the name of Jesus.


They're correct about praying for our leaders.  But I could think of some better verses to cherry pick.

When people automatically make those assumptions about Christians, something is terribly wrong.  That is NOT good news for the Gospel.  The Good News of Jesus must speak into every situation and culture, including this one.  It is the salt and light of the world.  It must never allow itself to become mired in the fallen cultures of this world.

So why is all of this good news for the church?


The Americanized church is dying!!!!  That is great news for the body of Christ.

I have friends, and have talked with many others, who are deep into the Americanized church.  One of them gave me a 6 page screed on why Jesus wants us to own assault rifles in case we need to overthrow the government, based on the most bizarre interpretation of Luke 22:36 I've ever seen.  Others seem to think that Ted Cruz and the TEA Party will help us "Take back" the country. (I'm never sure who/what we are exactly taking it back from.)

What I find fascinating is that due to them being so deeply involved in this type of synchronized sectarianism, they can't see that they have rendered themselves and the Americanized church largely irrelevant.  At best, they can preach to the choir.  But they can't speak into the culture at large.  No one is interested in what they have to say because they already know what it is.

The simple fact is that the Americanized church IS irrelevant!  And that is wonderful news for the Gospel.

Christians have always been, and always will be a minority in any and all countries.  You can splash all the magic water you want on a person.  You can vote for the approved candidate.  You can sit in a pew and sing all of the gospel songs you want.  You can even be born in a "Christian Country."  None of that means you actually follow Jesus!!!

If it is not a position of your heart, rejoicing in the grace and mercy that Christ has extended to you, then it doesn't mean a thing.

The church IN America understands that.  The true church is too excited about the kingdom of Jesus crashing in to this fallen world to let itself get overly concerned about any given fallen kingdom of man.  Now that it has tasted the mercy of the Savior, it is delighted to show it to others.  The true church is a happy church, not a church based on fear. (If you watch the pundits on FOX news, you will see quickly that the Americanized church is all about fear.  Because that is how FOX makes it's money.)

As the Americanized church continues it's slow, noisy death, the true church will continue to overcome the gates of hell.  It is an offensive force.  It does not cower behind political platforms, and it does not submit itself to any nation.  The Americanized church lost the culture wars when it fired the first shot.  The body of Christ is already victorious.

Instead, know who you are.  We are children of the victorious king.  We start as sinners saved by grace.  We end as the righteousness of Christ.  Our mission is to spread that news as an invitation to everyone.

So is the death of the American church.