The Bible is a messy thing 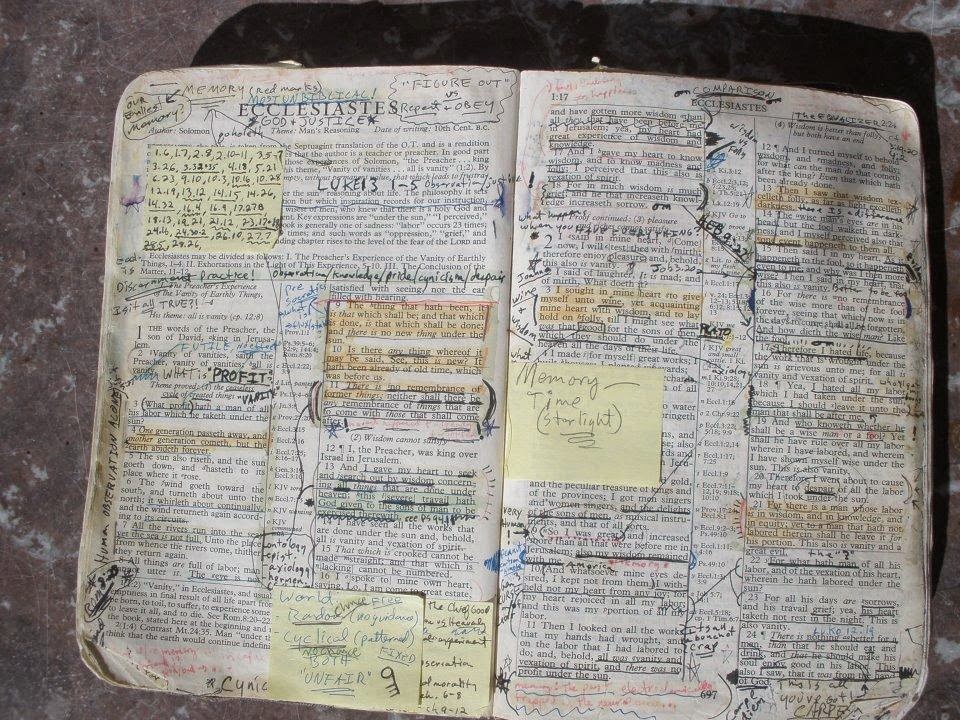 "For my thoughts are not your thoughts, neither are your ways my ways," declares the Lord.
Isaiah 55:8

So I was driving to the gas station yesterday, when I got a call from my dad.  I don't drive and talk on the phone at the same time, so I had to pull into a parking spot to chat.  Dad had a question about something he had heard his pastor say in church the other day.

"So Pastor Bob was reading along and he mentions that at the moment of Jesus' death, other tombs in Jerusalem opened up and dead people came back to life and wandered around the city.  I don't get that at all.  It's only mentioned in one place in the entire bible.  Plus, what happened to them after that?  Did they go back to their homes.  Did they die again later?  Did they just go back in their tombs at the end of the day.  What do you think?"

Dad was referencing Matt. 27:52-53, and yes, it's the only mention of that account in all four Gospels.  I told dad that I really had no clue as far as what to think about that aside by Matthew.  I looked in my own study bible and noticed that the editors conveniently skipped making a comment on that bit.  I also tried looking up some answers on Google.  Not much luck their, either.  So I'm left with this answer; I have no idea what to think about something like that.


And I'm fine with that.

Meet Alex.  At the ripe age of 11 (I think), he can do a spot-on British accent when reading verses from the bible.  It would appear that both he and his other siblings are all talented in the theatrics department, and all are extremely curious for kids their ages.

This is largely due to the fact that they have some great parents who "Get it."  By that I mean that they are not clingy, over protective parents who shield their kids from every thought and deed that is not approved of by a narrow, fundamentalist mindset.  Instead, they encourage their kids to ask questions and explore.

Anyway, last Sunday in Sunday school, we were looking at some of the stuff in the book of Judges.  The Israelites had rejected God as their king and wanted to be like the cool kids around them with a human king.  At the end of the lesson, I encouraged the kids to read the last few chapters of Judges.  I told them that it would shock them and curl their hair. (It's very much NC-17 literature.)

Afterwords, Alex and I were sitting at a table talking.  I told him that the bible is quite a mess if you read it for all it's worth.  Alex asked me why that was.  I said "Because life is a mess.  The world is a mess.  If the bible read like a Disney story, all sweetness and light with a happy ending every time, I wouldn't trust it at all.  Reality is not like a Disney movie.   Reality is messy, the bible reflects that.  Because it's messy, just like me, I trust it."  Alex seemed satisfied with that answer.


BTW: I don't trust christians who aren't messy.  It's been my experience that the very formal, tight and "Proper" christians are almost always hiding something.  Messy christians aren't afraid to admit it, and hand it over to Jesus.


There is stuff in the bible that I don't get at all.  Some times skeptics will ask me about the contradictions in the bible.  My normal response is to ask for an example.  19 out of 20 times that will shut them down because they don't actually know of any, they have just heard that there are.  Call me a dirty heretic, but I will then give them examples of actual contradictions that are, indeed, in the bible.  Sometimes they are sitting right next to each other.

My favorite example is Genesis 1 and 2.  There are many (Generally more traditional/conservative, fundamentalist types) who believe that all of the stories in Genesis are historically and scientifically dead on.  Well, in Genesis 1, the writer clearly states that plants and animals were created before any humans.  However, Genesis 2 clearly states that plants were created after the first human male, and even hints that animals were made after the creation of the first man.  So which one is it?  You have a serious problem if you are a fundy.

The most interesting thing for me in this instance is that those stories are sitting right next to each other. It is highly, highly doubtful that the writers and compilers of the Old Testament didn't notice this problem.


But they clearly didn't care.

So why didn't they care?!?!  What else is going on that I am missing?  I'm an American!  I need detailed and specific answers that I can measure and weigh.  Shame on the biblical writers for not thinking like an American.

If you want to have even more fun, and assuming that you need a cure for insomnia, try digging through the Levitical law.  In Exodus, it says that Hebrews can own other Hebrews as slaves, but males only for 6 years.  In Deuteronomy, it says they could own slaves, but both men AND women could choose freedom after a time.  THEN you have Leviticus, which says there ain't no way you could own a fellow Hebrew as a slave.  So what's a good, orthodox Jewish boy to do when trying to obey the law?


Believe me, there are many, many, many other examples of this. 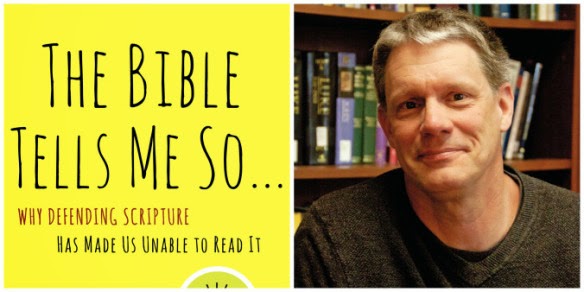 I got this book for Christmas.  I highly recommend it.  The author is Dr. Peter Enns.  In it, he digs deeply in to the ancient cultures in which the bible was written.  I've heard it said from a few scholars that we know that we have to translate the languages of the bible so that we can read it, but we forget that we have to translate the cultures, too.

The bible was NOT written TO us.  It was written FOR us, because it's God's word.  However, unless your name is Timothy, and you are pastoring a first century church in the city of Ephesus, 1st and 2nd Timothy were not written to you.

The mistake that I see so many American christians making is that they will read the bible through the eyes of 21st century American culture and thought.  The result is making the text say things that it never, ever meant. (This includes the 3 different creation stories, pretty much all of Genesis before the call of Abraham, and even well into the New Testament.) No wonder we get some of the goofy theologies that are out there.

Like I said earlier, there are things in the bible that I don't get at all.  I know that the way the ancient Hebrews thought of numbers was very different than the way we do.  I'll read some of these ancient genealogies, and I get thoroughly confused with the idea that some people lived 600, 700, or 800 years and more.  Is this real?  If not, what do these numbers mean in the context of the ancient world?  I don't know, and I'm fine with that.

Or what about the story of Noah?  In Genesis 6:3, God says that humans were getting on his nerves, so he clearly states that no one would get to live longer than 120 years.  Yet at the end of the flood story, in Gen. 9:29, Noah lives to be 950 years old.


For the record, I don't think God makes mistakes.  I think there is more to that story...and many others, than meet the eye.  Also, you throw in God's foreknowledge, and you get the idea that he pretty much knew all of this in advance.


But, again, something's going on in that text,
and I don't get it.
And I'm perfectly fine with that.

Here's a truism.  We like our gods nice and domesticated.  We like our bible that way, too.  We like them that way so that we can control them and make them do our bidding.  Here's the problem with that, if you actually read the bible for all it's worth, you figure out pretty quickly that both the bible and God will almost never do what you think they should do for you.

I try not to read the bible anymore.  I prefer to swim in it.  More and more, I see scripture as an invitation to a wrestling match with God.  It's thick with multiple layers and nuance.  Sometimes there are stories with in stories with in even more stories.  There are multiple parallel stories scattered all over the place.  Those confusing areas of the bible?  They just get my curiosity revved up and hungry for more.  Sometimes, reading the bible is like trying to swim against a stiff current.  It can exhaust you both mentally and physically.  I love it!

I understand how for many people, the confusing portions of the bible might be a threat to their faith. (If this story isn't 100% historically and scientifically accurate, can I believe in the resurrection???)  I also understand that it can give ammunition to skeptics.  I would say two things about that.  #1. Don't worry about the skeptics.  Don't let them intimidate you.  If someone doesn't want to believe and follow Jesus, it's not your problem.  No amount of arguing, yelling or screaming is going to change any of that.

#2. Don't be afraid of the confusing stuff.  OWN it!  Embrace it.  "Trust in the Lord with all your heart, do not depend on your own understanding." ( Prov. 3:5) Understand that you will never, ever fully understand either God or the bible. (Seriously, if you could actually reduce this God to a formula on a piece of paper, he wouldn't be very impressive.) This God doesn't want or care if you can totally figure him out.  He doesn't have self-esteem issues.  He doesn't need group hugs or the latest hair style.  He doesn't want you to hold his hand, he wants to hold yours.  He doesn't want to be understood.  He wants to be trusted.

I am more and more convinced that the confusing stuff is in the bible for a very specific purpose; to keep us off balance.  It forces us to be humble.  It forces us to admit were don't actually know everything.  If we are honest, it forces us to stand in the knowledge that we very finite, indeed, that we don't have all the answers, but Jesus does.

So like I told Alex, the bible is a very messy thing, and that's why I trust it.


For some resources that will help you to understand much of Genesis in it's ancient cultural context, I provide to following links.  Do yourself a favor and look up the various commentators in these videos.  Most of them walk in the halls of geniuses.

I find this one to be the best overview of Genesis 1 I've ever heard. (Ken Ham really needs to pay attention to this.)