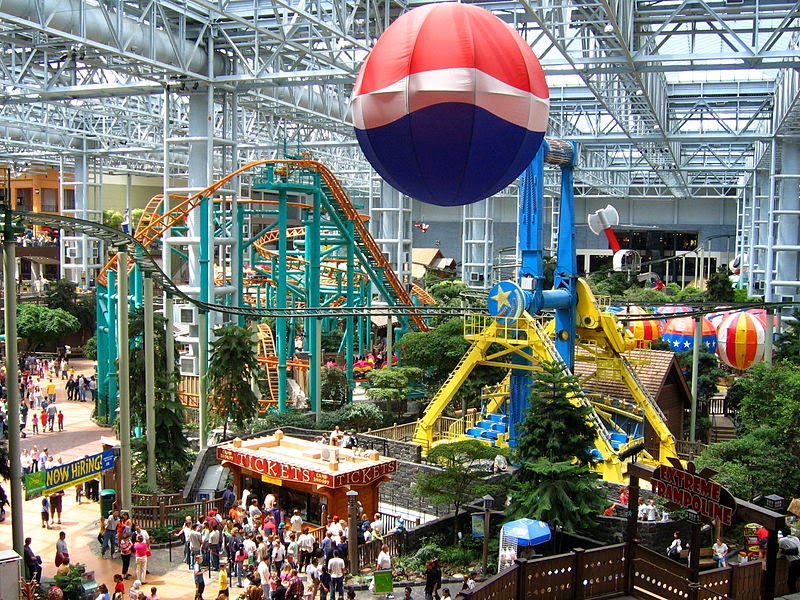 "I have told you these things, so that you may have peace.  In this world you will have trouble.  But take heart!  I have overcome the world."
John 16:33

Two days ago I had to run some errands.  One of them was to talk to the good folks at T-Mobile about some phone stuff.  The nearest T-Mobile place for me is at the Mall of America.

You may have heard of this place before.  It's the largest mall in the U.S., and soon to be the largest mall in the world. (The construction going on is impressive, and causes me to get lost rather easily.) It's located on the east side of Bloomington, Minnesota, and right across the freeway from the Twin Cities' metro airport.  This, in turn, makes the roof of the mall a handy spot for emergency landings.

You may also have heard of the mall because the Somali group, Al-Shabab, recently asked for it's followers to commit a terrorist act there.  Lovely!


My first thought on hearing this news was to think, "If you could really pull something like that off, you wouldn't blab to everyone where you were going to do it."  My second thought was, "Yeah, but it only takes one crazy."

Minnesota has one of the largest Somali populations in the U.S.  There have been young people from that community heading over to join either Al-Shabab in Somalia, or ISIS over in Iraq and Syria.  Needless to say, the Somali community is enraged over this.  They have been doing everything they can to keep crazies from recruiting their kids.

I have no idea what would cause a young person to join a death-cult.  When I was their age, I grew my hair longer to show my teenage rebellion. (I even had a Mullet for a while.  YAY!!!!) The thought of strapping on dynamite or grabbing an assault rifle wasn't in the cards.

Anyway, the local Somali community has a tradition for the end of Ramadan.  Thousands of them will descend on the Mega Mall for an all night party (Minus the beer.), chow down in the food courts, and ride the rides in the amusement park.  Therefore, I am inclined to think that most of them are not interested in blowing up one of their favorite places.


So I'm at the mall around noon on a Friday.  It wasn't terribly busy, but busy enough.  As I was walking around, it only took me only a few minutes to notice the increased police presence.  The white uniformed mall police were partnered with officers of the Bloomington police department.  I would guestimate that there were at least 4 times the usual amount.

I headed in to the Apple store with some questions about my computer.  At the door was guard.  I figure he was in his 70s, and was clearly blind in one eye.  Perhaps Apple is concerned that an elderly terrorist will strap something to their walker and head on over.

So I ask the guard about the noticeable police presence.  He said that, yes indeed, they were there to reassure the nervous.  I asked him if the threat was credible?  He said no, but that it only takes one crazy...


I have noticed that the church in America has a lot of fear in it.  In fact, a lot of our theology and behavior is based on fear. (So it seems to me, anyway.) We fear Muslims.  We fear our neighbors.  We fear Marxist/Socialist/Secretly Kenyan Presidents.  We fear that the government will take away our guns so that we can't overthrow it when we feel the need.  We fear Evolution because we know that God has to bring creation into existence according to our wishes and really poor exegesis of Scripture.  We fear that if we can't legislate our morality God will smite our nation.


You know what I fear?
Strawberries with hair on them.

"There is nothing new under the sun."


I like history.  I have fully embraced my "Inner Nerd."  I've been reading various history books since I was a kid.  One constant that I have noticed as far back as Socrates and Plato, is that every generation complains that the younger one is full of spoiled brats and is destroying society.  Today, humanities' ability to wreak havoc and do it in a spectacular fashion for all to see, has been greatly expanded.  But the impulse to do it is nothing new.  It's been there ever since the fall of man.  The world has been coming to an end for along, long time.

Of the many, many things I love about Jesus is his ability to tell the truth bluntly.  Unlike prosperity preachers, Jesus is honest.  He told his followers that they would have plenty of problems, troubles, persecution, etc.  And then he would say, "Trust me.  I know what I'm doing." (My translation.)

I admit it.  Trusting Jesus is hard.  I have a 50 year track record of him having my back and saving my butt over and over again.  But it's still hard.

A friend at work asked me once what he needed to do to be saved.  I told him, "Just put your faith in the faithfulness of Jesus."  At the end of the day, he's the only one who can/did/will pull it off.  My faithfulness sucks!  But he's really good at it.


There is a Mosque with a Halal market near where I live.  It's the only place I know of where I can find camel and goat meat. (Hey, I lived in the Middle East for a while.  I dig me some Arab cuisine from time to time.) I like to go in there just to see the looks on their faces. "What's that Cracker doing here?!?!?!  Is he F.B.I???"  I like to use the few Arabic phrases I know.  Pretty soon it's like I'm an old friend.  They are genuinely happy that some blonde hair, blue eyed person is showing some respect to and enjoyment of their culture.  If Jesus wants to use that to plant some seeds for his kingdom, then I'm happy to oblige...and get some camel meat.


I am not afraid to go into a place like that.

There is a gas station down the road where I normally fill up.  It is owned by a Lebanese family.  I had assumed for a long time that they were a tribal christian family.  I filled up there after having been at the mall.  I was talking to Ali, the owner, about what I had seen.  He gave me an earful about how much he hates ISIS, then he told me he was a Muslim.  He then told me that he almost never tells anyone that because he is scared.  He is not scared when I am there...and I am not afraid to buy my gas from him.


While I was at the mall, I people watch.  There are people from all over the world there even at the oddest of times.  I hear a lot of different languages.  I'm decent at guessing which are which.  I'm curious.  I'm not scared.  That which is different intrigues me.  Those who were made in the image of God come in all shapes and sizes.

There certainly were many Somalis at the mall that day.  As I was leaving, a group of four Somali girls were standing outside one of the cheesy restaurants at the mall.  They were taking selfies of each other. They had on colorful headscarves, robes, and were chattering away in a language I couldn't understand.  They were giggling and goofing around like any 20-something would.  I was not afraid.


I'll probably go back to the mall next week.

P.S. Normally, I try to find a video to end my screeds with one that is appropriate to the tone of the post.  I couldn't find one that worked for the Mega Mall.  However, this was the song on my Pandora station as I was finishing up.  Enjoy!