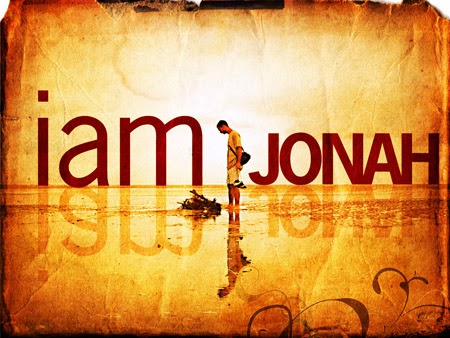 The word of YHWH came to Jonah son of Amittai: "Go to the great city of Nineveh and preach against it, because it's wickedness has come up before me."  But Jonah ran away from YHWH and headed for Tarshish.


And you know what happens next.

But YHWH provided a great fish to swallow Jonah, and Jonah was inside the fish for three days and three nights.

Old friend, come back home.
Even though you always were alone.
You had to push against the fates, just to make it, make it through the gate.

Old friend, come to me.
Everything I was, I used to be.
I went north and I went east.
Follow in the footsteps of some beautiful beast.

I know you don't believe me
when I believe in you.
I know it could get much easier
if you want it to.
"Old Friend" by Sea Wolf.


I have aged more since about this past October than I think I have in about 15 years.  A couple of weekends ago, I went up with our Youth Group for a Winter retreat.  While up there, one of my friends came up to me and asked if everything was O.K.  I told him that I was under a great deal of stress.

My friend pulled me aside and told me that he was going to give me some advice that another fellow from our church had offered to him.  He said, "Slow your ass DOWN!" (He had a distinct grin on his face when he offered this.) He said that the way I looked, I was either going to be in the hospital or the looney bin within a month.

So we were coming home of the bus from the retreat.  It didn't have proper heating, so my feet were cold and my whole body ached.  A certain Middle School girl leaned over and asked me how old I was.  I told her to guess.  And thus the following...

I had a distinct urge to shove her off the bus.

A bit ago, I was driving home from the Sunday service.  I had the radio to the nation's greatest radio station, 89.3 The Current.  A song came on that I had never heard before.  The tone and the lyrics hit me right in my soul.  You can call me crazy all you want, but I have seen God use all sorts of music to communicate to me before.  It felt as if he was singing directly to me.  It made me cry in the car.

Give it a listen.


So Jonah runs from the Lord.  Jonah is actually a comedy, even though most people don't know that.  God calls Jonah to go to Nineveh.  That city was the capital of one of the most evil empires ever to exist.  Jonah plans on running to Tarshish.  Tarshish was located in southern Spain.  It was considered to be paradise.

How could you possibly find God in paradise?  He's too busy doing his work in a place of sin, wickedness and evil.


I'm good at running from God.  I do it more than I care to admit.  I've been running from God for many months now.  Don't kid yourself.  Going to church on Sundays & Wednesday nights doesn't mean you're not running.


God's mercy & love are not like our concepts.  God's mercy can be severe, and his love can be relentless.

In his love, God brings a storm that gets Jonah cast overboard.  In his mercy, God causes Jonah to end up in a whale's guts for 72 hours, only to be barfed up on a beach.

In his mercy, God stripped everything away from Jonah until all that was left was God.

I've been running from God for a long time.  God has been stripping things away from me during all of this.  I won't bore you with the details, but suffice it to say that I have been paying a high price.  To quote one of my favorite philosophers; "I feel like butter scraped over too much bread."

I have a terrible time waking up first thing in the morning and sitting down with God.  I have a worse time before going to bed.  During the rest of the day, I find all sorts of excuses and distractions to hold him at arms length.  I willfully seek them out.

I really don't want to end up sitting in a belly full of fish bile, plankton & weeds.

The two areas where I find myself connecting with Jesus most easily are when I am outdoors, either in nature or driving around in it, OR when I write.  Either when I am writing in this blog, or working on my book, I can literally feel his pleasure.  I feel alive!  In particular, when I am writing stories in my book, it's like he is right there with me telling me what to say.

Maybe that sounds crazy.  I confess, I have some minor mental health issues. (Yeah, like you don't.) But it's not crazy.  Jesus connects to people according to how he has wired them.  We are his creation.  He knows what he's doing.

This has been dawning on me over the past few days.  Even as I write all of this now, it feels like an anvil is lifting off my shoulders.

I have let my job, family health problems, a recent ugly interaction with a far-right, fundamentalist  screwball, facebook, videos, willfulness, and on & on & on come between me and the lover of my soul.

I am too tired to run anymore, and I'm not even sure where Tarshish is anyway.

God rarely shouts.
He tends to whisper.
And sometimes he sings...even on the radio.