Ideas from a manger 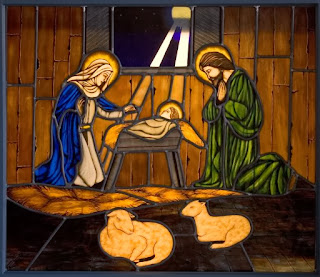 It's been almost 3 months since I've written anything.  I haven't worked much on my book, and I've barely posted anything on this blog.

I just really haven't been inspired about much of anything. (However, some thoughts have been brewing in my head about the link between the Prophet Daniel and the birth of Christ, so you never know.)

The Holidays don't help either.  Don't get me wrong.  I love everything from Halloween through New Years.  It's just that they distract me rather easily.

So today is Christmas, so I have a moment to breath.  I also have a quick story to tell you before the main point.  I got two new pillows for christmas, and they are most awesome.  And here's why I like that gift so much...

On Thanksgiving Eve I took a little tumble down the stairs.  It had been a brutal few days at the store, so I was exhausted.  The problem is that sometimes I get so tired I can't sleep.  So I popped a couple of (over the counter) sleeping pills.  I should have gone to bed right away.  Instead I stayed up putzing on the computer.  When I finally left for bed i was half-zombie.  As I closed in on the last 2 steps, my slipper came off, I tripped and then went face-first into a door frame.

It didn't hurt!  My ARM hurt!  It got a juicy rug burn on it.  It was dark, I knew my head was bleeding, but it was my arm that bugged me.  So I put a towel on my face and went to bed.  I was out cold in about a minute.

THE NEXT DAY I pulled the towel of my face to notice that it looked like a ritual sacrifice all over my bed.  Two pillows completely soaked in sticky blood...never mind the sheets.

Being a guy, I took a shower, got cleaned up and put a band aid on my gapping wound and thought, "Well, that'll heal in a few days."  Later that day, I went to my folk's for Thanksgiving.  They took one look at me and freaked out.  6 hours and a hospital visit later, I have 11 stitches in my head and 2 in my lip.  And after all was said & done, my arm still hurt more than all the rest.

I'm used to getting interesting looks from people by now.  Four weeks later, I still have some swelling in my face.  Honestly though, while I will have some amount of a scar, it's gonna be sexy!

Yesterday I read a piece by Ross Douthat from the New York Times.  I thought it was a fairly brilliant critique of an aspect of modern American culture.  So being lazy, I'm just going to re-post it and let you decide for yourself.


"PAUSE for a moment, in the last leg of your holiday shopping, to glance at one of the manger scenes you pass along the way. Cast your eyes across the shepherds and animals, the infant and the kings. Then try to see the scene this way: not just as a pious set-piece, but as a complete world picture — intimate, miniature and comprehensive.

Because that’s what the Christmas story really is — an entire worldview in a compact narrative, a depiction of how human beings relate to the universe and to one another. It’s about the vertical link between God and man — the angels, the star, the creator stooping to enter his creation. But it’s also about the horizontal relationships of society, because it locates transcendence in the ordinary, the commonplace, the low.
It’s easy in our own democratic era to forget how revolutionary the latter idea was. But the biblical narrative, the great critic Erich Auerbach wrote, depicted “something which neither the poets nor the historians of antiquity ever set out to portray: the birth of a spiritual movement in the depths of the common people, from within the everyday occurrences of contemporary life.”
And because that egalitarian idea is so powerful today, one useful — and seasonally appropriate — way to look at our divided culture’s competing worldviews is to see what each one takes from the crèche in Bethlehem.
Many Americans still take everything: They accept the New Testament as factual, believe God came in the flesh, and endorse the creeds that explain how and why that happened. And then alongside traditional Christians, there are observant Jews and Muslims who believe the same God revealed himself directly in some other historical and binding form.


But this biblical world picture is increasingly losing market share to what you might call the spiritual world picture, which keeps the theological outlines suggested by the manger scene — the divine is active in human affairs, every person is precious in God’s sight — but doesn’t sweat the details.


This is the world picture that red-staters get from Joel Osteen, blue-staters from Oprah, and everybody gets from our “God bless America” civic religion. It’s Christian-ish but syncretistic; adaptable, easygoing and egalitarian. It doesn’t care whether the angel really appeared to Mary: the important thing is that a spiritual version of that visitation could happen to anyone — including you.


Then, finally, there’s the secular world picture, relatively rare among the general public but dominant within the intelligentsia. This worldview keeps the horizontal message of the Christmas story but eliminates the vertical entirely. The stars and angels disappear: There is no God, no miracles, no incarnation. But the egalitarian message — the common person as the center of creation’s drama — remains intact, and with it the doctrines of liberty, fraternity and human rights.
As these world pictures jostle and compete, their strengths and weaknesses emerge. The biblical picture has the weight of tradition going for it, the glory of centuries of Western art, the richness of millenniums’ worth of theological speculation. But its specificity creates specific problems: how to remain loyal to biblical ethics in a commercial, sexually liberated society.
The spiritual picture lacks the biblical picture’s resources and rigor, but it makes up for them in flexibility. A doctrine challenged by science can be abandoned; a commandment that clashes with modern attitudes ignored; the problem of evil washed away in a New Age bath.
The secular picture, meanwhile, seems to have the rigor of the scientific method behind it. But it actually suffers from a deeper intellectual incoherence than either of its rivals, because its cosmology does not harmonize at all with its moral picture.
In essence, it proposes a purely physical and purposeless universe, inhabited by evolutionary accidents whose sense of self is probably illusory. And yet it then continues to insist on moral and political absolutes with all the vigor of a 17th-century New England preacher. And the rope bridges flung across this chasm — the scientific-sounding logic of utilitarianism, the Darwinian justifications for altruism — tend to waft, gently, into a logical abyss.
So there are two interesting religious questions that will probably face Americans for many Christmases to come. The first is whether biblical religion can regain some of the ground it has lost, or whether the spiritual worldview will continue to carry all before it.
The second is whether the intelligentsia’s fusion of scientific materialism and liberal egalitarianism — the crèche without the star, the shepherds’ importance without the angels’ blessing — will eventually crack up and give way to something new.
The cracks are visible, in philosophy and science alike. But the alternative is not. One can imagine possibilities: a deist revival or a pantheist turn, a new respect for biblical religion, a rebirth of the 20th century’s utopianism and will-to-power cruelty.
But for now, though a few intellectuals scan the heavens, they have yet to find their star."
For the original source, click this link.  http://www.nytimes.com/2013/12/22/opinion/sunday/douthat-ideas-from-a-manger.html?_r=0