The Kingdom of Weakness. 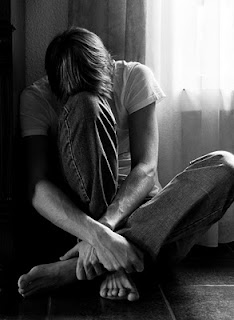 For it has been granted to you on behalf of Christ not only to believe on him, but also to suffer for him.
Phil. 1:29

...To keep me from being conceited because of these surpassingly great revelations, there was given me a thorn in my flesh, a messenger of Satan, to torment me.  Three times I pleaded with the Lord to take it away from me.  But he said to me, "My grace is sufficient for you, for my power is made perfect in weakness."  Therefore I will boast all the more gladly about my weaknesses, so that Christ's power may rest on me.  That is why, for Christ's sake, I delight in weakness, in insults, in hardships, in persecutions, in difficulties.  For when I am weak, then I am strong.
2 Cor. 12:7-10


While I have grown to understand that in God's kingdom, everything is upside down compared to this world, I still need reminding of that almost every single day.


So last week, I had a very interesting day.  One that I doubt I'll ever forget.  I have a younger friend who is addicted to heroin.  You wouldn't guess it by looking at him.  When I think of heroin junkies, I normally think of skinny, little folks who look like they just got out of a concentration camp.  Not so with this guy.  He is a big, muscle-dude, who could maybe beat me up.

He avoided me for a long time because of his problem.  However, we re-connected after he got himself back into treatment.  Last week I took him out for coffee.  He was in the process of moving from one treatment facility to another.  After coffee I was going to drop him off at his friend's, who was then going to move him.

Well, while I was driving him to his friend's place, he asks if I wouldn't mind driving him to the methadone clinic so he can get his daily dose?  His buddy was supposed to drive him there during the move.  So I asked what was up? (During most of this trip, he was texting back and forth.) Turns out his buddy was busy shooting up, and was thus unavailable.


SO, I drive my friend to the clinic.  He was inside for about 15 minutes.  During that time I saw SO MANY people go in there!  Taxis coming and going.  All sorts of different types going in there to get the one thing that seems to be able to stop the cravings that heroin can give you.  It was simply horrible to sit there and watch it.

My friend gave me the phone # of his buddy who had been shooting up.  After I dropped my friend off, I called his buddy.  He answered.  We talked.  I told him that he was still my brother in Christ no matter what evil shit he was struggling with.  He cried.  I cried.  I told him he could call me any time if he needed to.  He thanked me.  We said goodbye.


I sat in my car and cried and cried like a little girl for so long.


I don't understand heroin.  My friend says that you fall in love with it.  You want it more than anything...even air.

I don't understand heroin, but I do understand addiction.  I have an addictive personality.  I am addicted to chewing tobacco.

I do not love the chew.  I hate it.  It's not the nicotine that has me hooked...although I'm sure that doesn't help.  I have tried Nicorette gum.  It didn't work.  I have tried Chantix.  It worked to a degree, but would make me barf my guts out about 30 minutes after taking the pill. (Not much fun there.)


I absolutely hate it!

Some days, it is not a problem.  Other days it is a big problem.  For the past many weeks, it has been a HUGE problem.  Not because I do it all the time.  I don't.  It is a huge problem because it is a "Known  IDOL" that I run to when stressed.  I run to the chew instead of Jesus.  I worship the created, rather than the creator.  And then I beat myself for it like nobodies business.  I trash myself, judge myself, kick myself.

It is this re-enforcing cycle where I do all of Satan's work for him.  All he has to do is give me a little poke of guilt, and then I get spinning about how stupid and worthless I am.  Meanwhile, he's kicking back in a lawn chair sipping a pina-colada thinking, "Gosh, I love the way that boy does my job almost as well as me."

I have begged God repeatedly to take the temptation away.  He has refused every time.  I get very angry with God because of this.  However, I have been trying to understand the "Why" of all of this.  In  the mean time, I still beat myself up.


This tirade of guilt and shame cripples me mentally.

But since that day at the clinic, things have begun to change.

In America, you are a self-made man.  A man must be strong.  He must be able to pull himself together.  We worship the individual above all else.  If you work hard enough, you can achieve virtually anything.

Most men, especially if they are late-teens and 20-somethings, believe that they are just a few good "Workouts" away from being unstoppable.  If you don't believe me, take a look at all of your buddies' "Selfies" on Facebook.  I have sooooooooooo many friends who can't resist posting pics of themselves in the gym, or showing off their abs of steel.  We are a nation of Peacocks.

A real man will not admit his weakness.  He will suck it up and stuff it deep down inside until it blooms again as a beautiful ulcer.

Sad to say, this is rife through out the church in the U.S.  I really think Satan loves that, too.

"Blessed are Zeros, the losers, the addicted, the girl who just had an abortion, the failures, those who struggle with all sorts of sexual issues, those who can't do the right thing even with a gun to their head, for theirs is the kingdom of heaven.

Blessed are those in grief, in agony, in tears, in pain.  Because they/you are never more Human then when you realize you are ultimately a frail, mortal being...and it is at that point that you are honest with God and He can comfort you.

Blessed are the meek, the ignored and overlooked, those who never made it off the bench and on to the field, the not even close to being famous, those who never even went to prom.  The entrepreneur and the revolutionary will hand you the keys to the earth, because God says "It's all mine to give, and I give it to these simple, humble people."

Blessed are those who are dehydrated and starving for righteousness, because they know they have none of their own.  It is the "Righteousness of Christ" that will satisfy you."
(Matt. 5:3-6 My translation)

Has YHWH been telling me this entire time, "No.  I will not take the temptation away from you!  You must be totally honest and embrace your weakness."?

I don't like being honest about my weaknesses.  It's too easy to get judged that way...especially by other "Christians."  I know that from very intimate experience.

All this time, has God simply being saying to me, "My grace is sufficient for you, for my power is made perfect in weakness."?

After seeing all those poor people walking in and out of that methadone clinic, I'm simply tired of being strong.  And that acknowledgement has helped a great deal.

I think I need to spend a good deal of time boasting of my weaknesses.