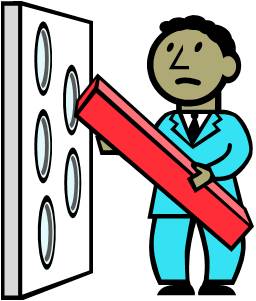 As Jesus went on from there, he saw a man named Matthew sitting at the tax collector's booth.  "Follow me," he told him, and Matthew got up and followed him.

On hearing this, Jesus said, "It is not the healthy who need a doctor, but the sick.  But go and learn what this means; "I desire mercy, not sacrifice." for I have not come to call the righteous, but sinners."
Matt. 9:9-13


So this past Friday I drove down to Mankato and New Ulm.  Two towns south west of the Twin Cities.  I have been thinking ahead to chapter 8 of my book, which I will title, "Jesus climbs Herman the German." 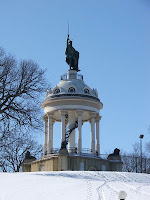 <--- font="">That's what Herman the German looks like, in case you were curious.  It's a big statue on a pillar in a park that overlooks the extremely ethnically German town of New Ulm.  New Ulm also happens to be the home of Schell's Brewery, which we took a tour of and will also probably end up in this chapter.

I had a great time with my friends, and to be honest, the jokes for the story pretty much just wrote themselves.  Those tend to be the best kinds of jokes.


This morning at Living Waters, I was sitting with my friend Zach.  He told me that my ministry is to outcasts.  If you follow Jesus, he makes you salt & light in this world.  You don't work at it, you just are because he says so.  Your only job is to stay salty.  Let him worry about where you will be placed.

Each person who follows Jesus is unique.  As such, one size does not fit all.  Some people are put in particular places because Jesus knows that this is where they/you/me will be most affective for his kingdom. (Don't tell him where to put you.  He'll probably do the opposite just to make a point.  He knows best.)


Anyway, Zach says that I am for the outcasts.

I am not sure if that exact title fits my friends or the people I hang out with, but it certainly fits me.  I am the original Square Peg.  I have never felt like I totally belonged anywhere.  Seriously, I never have.  Still, I understood what Zach was trying to say.  I know some rather "Original" people, shall we say.  I don't really go out and look for them.  I either find myself in the middle of them, or they are drawn to me. (Another thing that Zach said to me.) I suppose its a bit out of the ordinary, but I admit that I like it...and it keeps from being bored. 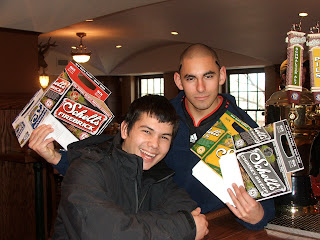 The first miracle that is recorded in John's Gospel is Jesus turning 180 gallons of water into fine wine.  If Jesus could do that, then I can use a free beer tasting at the brewery tour for the Gospel, too.  So there!

The cute, short one is Aaron, who had not bothered to shower before he got in my VUE, and explains why his normally perfect hair is a mess.  I had a great desire to drive with the windows rolled down even though it is February.  Aaron is a Square Peg like me.

The other guy is Sam.  Sam is not a Square Peg.  Sam is a Sergeant in the Army Reserve.  He just got back from a tour in Afghanistan.  He had some interesting stories to tell.  Sam really likes his beer.

Neither of these guys follow Jesus...yet.  I am not a Calvinist.  I am not an Armenian, either.  I just embrace the mystery because I am too dumb to understand heavy duty theology.  Even though I am not a Calvinist, I do believe that it is inevitable that both of these guys will follow Jesus.  I can't explain why I am convinced of this, but it gives me great peace.  As such, I do not feel the need to beat either of them over the head with a bible, or shove one down their throats.

Sam lives with his cousin in Mankato.  Sam also had a friend over when we got there Friday morning who looks like he eats a horse for breakfast...maybe two.  That guy's arm could feed a village for a week.  I would prefer not to get into a fist fight with any of them.

These guys are soldiers. (Except for Aaron, who is a tiny little girl.) They like to chew tobacco.  They like to drink beer.  Actually, they like to drink A LOT of beer...among other, stronger beverages.  They like to use words and tell stories that most "Christians" would not like to hear.  I am good at using Blue words, even though I try not to.  These guys impressed me with their interesting vocabulary.

I have learned that just because people fit into a certain mold with certain habits, that does not mean that they are ignorant.  Sam had told his giant friend and his cousin who I was and that I was writing a book that has Jesus in it.  They asked me some interesting questions about Jesus.  I was happy that they felt comfortable asking me these questions in between spitting tobacco into cups, glasses and bottles.


The truth is that I absolutely loved every single minute of it!

I'm not exactly sure why that was the case.  I will confess that when those topics come up, and that it comes from a heart that in genuinely curious, I feel very much alive.  I do not enjoy it when questions come from a heart that is simply cynical and is only asking them to stir the pot and be a snot about it.  But in that kitchen, while Aaron & Sam played "Magic: The Gathering," (Which is essentially Pokemon for adults.) I felt very much alive and at peace.

I will never save anyone.  No one will.  Only Jesus saves.  He has been teaching me for a long, long time that this is his job, not mine.  All he asks is that I stay salty where ever he puts me at the moment.  Sometimes that is easier than others.  It is a matter of faith, because it requires that I let go and just trust that he knows what he is doing.  Like I said, sometimes that is easier than others.


But when it happens, I feel like I finally belong.