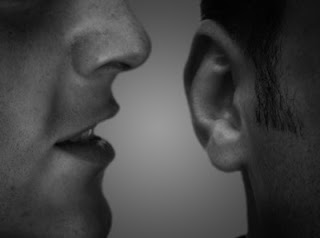 He replied, "I have been very zealous for the Lord God Almighty.  The Israelites have rejected your covenant, broken down your altars, and put your prophets to death with the sword.  I am the only one left, and now they are trying to kill me too."

YHWH said, "Go out and stand on the mountain in the presence of me, for I am about to pass by."

I am incredibly good at pushing God away.  It's as if it is a gift.  For a big fellow, he certainly gets shoved easily.

I say that I want to hear God's voice.  I want a revelation.  I want the spectacular.  I demand it.


And that's the problem.  I want it all on my terms.


Last Sunday, Scott was preaching on the Sabbath in Mark 2 & 3.  We have been going through the Gospel according to Mark for a about two months now and we still haven't gotten past the third chapter.

I find Jesus behavior and words fascinating.  He really wasn't complicated at all.  He actually was very stripped down and basic.  We have a bizarre tendency to make his words complicated, usually to justify an action or attitude that we want to have, but they really aren't complicated.


Why won't God do things the way we want him to?  What is wrong with him?  Doesn't he know which way is up?

Honestly, he can be such a pain. 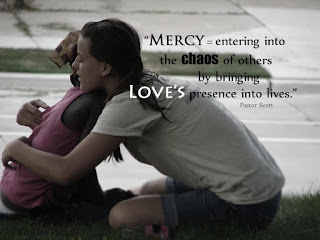 I don't know who made this picture, but it is a quote that Scott made in the service this past Sunday.  Feel free to make it a meme.  It would be good to have that quote pasted across numerous pictures.

Jesus, as the incarnate form of the Almighty One, humbled himself and entered into the chaos of this fallen world to show mercy.  For God did not send his Son into the world to condemn the world, but to save the world through him.  He began his ministry in the water being baptized next to sinners.  He ended is ministry between two criminals on a cross.  He came closer.

Personal space.  Mine is about 3 to 4 feet. (More, if you haven't showered yet or have been enjoying garlic.) Some people have less.  Others have more.  I was in Norway visiting relatives a long time ago.  My family said good morning to a man about 20 feet away, and he just about jumped out of his skin.  As I understand it, Scandinavians require A LOT of personal space.


I think we require personal space because of our insecurities.

One thing I have noticed about Jesus is his lack of personal space.  He had no insecurities.  He certainly wasn't arrogant, but he was very self-assured.  He was very comfortable in his own skin.  I think that gave him the ability to do things that often make us feel uncomfortable.

He seemed to like to touch people a lot.  Sometimes he liked to make mud pies and rub it in blind people's eyes.  Other times he liked to hold people's hands or wash their feet.  He even liked it when bad people washed his own feet with their hair.  He certainly had a thing for kids and seemed to enjoy them crawling all over him regardless of how stinky they may have been.  So much for personal space.  He liked to get closer.

Pastor Scott told a story from a conference he had been to quite recently.  There was an elderly pastor who was very well respected.  He was known for his humility, gentleness and being a man after God's own heart.  A younger pastor wanted to learn from the older how he had gained his knowledge and grown so faithful.  How had this older man learned to hear the voice of God in such an intimate way?


YHWH said, "Go out and stand on the mountain in my presence,
for I am about to pass by."

A great and powerful wind tore the mountains apart and shattered the rocks before YHWH,
but YHWH was not in the wind.


The older pastor told the younger pastor to come much closer to him than he had, very close.


After the wind there was an earthquake,
but YHWH was not in the earthquake.

The young pastor stood next to the older, but the older told him to move in closer.


After the earthquake came a fire,
but YHWH was not in the fire.

The older pastor leaned his body into the younger.  He violated his personal space.  He leaned his face into the young man's face.  It looked very uncomfortable to those around them.  I'm sure it was very awkward for the young pastor, too.


And after the fire came a gentle whisper.
When Elijah heard it, he pulled his cloak over his face and went out and stood at the mouth of the cave.

Then a voice said to him, "What are you doing here, Elijah?"

In a very soft voice, the older pastor said into the ear of the younger...
"God doesn't shout."