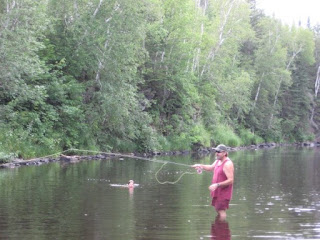 I have a friend who lives in the Duluth area.  If you know Minnesota, the area north of Duluth is called the Iron Range, due to the iron ore industry.   The Canadians think there may be a huge cache of diamonds up there, too. (Probably left over from the Dwarves that used to live in the vicinity centuries ago.)

Anyway, the folks who live in this region are all a little nuts for the outdoors.  The economy is almost always difficult in that region, but most people stay there anyway because of the quality of life.

I mean, who needs a civilized grocery store when you can simply shoot and eat things from your kitchen window, or walk ten feet and drop a line in a river or lake?

This friend of mine is a clever fellow.  I was often jealous of him in college because he was and still is much brighter than I am. (Which probably isn't the most difficult task.) He's working on a Phd. in something when he isn't out eating Bambi and Thumper.  Suffice it to say, my friend likes his guns.  You need to be aware of that.

He posted the following on Facebook today in response to the tragedy in Newtown, CT. over the weekend.  I thought it was a good post and asked him if it was okay to use it as a guest post for my blog.  I doubt highly that everyone reading it will agree with all that he says, but that's fine.  This is written from the perspective of someone who loves to hunt, shoot and enjoy his guns.

My own thought is that it is high time for this country to have a mature, adult discussion about guns.  I have owned two since I was 14. (Don't have anywhere to use them now, but I still have them.) I believe in basic gun rights, but I look at them as more of a Responsibility than a Right, per say...once upon a time I think those were two sides of the same coin.

Like it or not, America is one of the most violent countries on the planet.  We can pretend otherwise, but that doesn't help.  I pray that America will repent of it's worship of lesser gods, but I'm not holding my breath.

At any rate, I now give you the views of my friend Doug, who looks simply splendid in a red tank top and red shorts while trout fishing.

At the risk of offending nearly everyone in some manner, here goes.
i hunt. lots. i own many guns-big guns, small guns, and in-between size guns. this fall i hunted often, although not nearly often enough. my kids are being trained to use guns, and this winter my 13 yr old will go through firearms safety training. i would seriously be bummed about losing this aspect of my commune with nature.
so, unlike many gun fanatics, i actually use guns for a purpose. to kill stuff to eat.

in the clinton era assault weapons ban (which expired in '03) i hunted also. still had my guns, still was able to purchase ammo, all that. however, i have not been a member of the NRA since...the early 80's. no more...and today more than ever, i would like to tell my fellow hunters who cherish their traditions: there is no "slippery slope", that is a bs argument. restricting access to high capacity assault weapons will have no impact on your access to hunting guns, period. allowing the NRA to mandate federal gun policy will only allow more of these rampage killings.

there is no way, that ANYONE needs a commercially available high capacity assault rifle like the one used in the ct shooting for hunting- they are purely recreational tools that are completely impracticable for doing anything other than maiming a lot of people in a very short time. automatic pistols have outsold standard revolvers for decades--why?

what makes these guns the weapon of choice in mass slaughters is the capacity for 30+ round magazines- the Ct shooter apparently had enough magazines to kill every kid in the school-that might have been his plan. it's a simple matter of logistics- even the best competition shooters take over 10sec to reload a standard revolver. a 9mm handgun, with a exchangeable magazine, takes several seconds to remove the magazine, and load a new one- especially for a person who is not a professional and under duress. it's not as easy as Die Hard makes it look. a lunatic armed with a revolver would be easily overcome as he (it always a "he") would have to stop to reload. the 30 round clip of the Bushmaster .223 takes seconds to reload. (btw, there are dozens of military-style copies of the AR-15 made- for $1000 you can get yourself one to)

the national discussion has to take place on several levels.
first, we need acknowledge that evil always has, and always will exist. banning guns will not usher in the kingdom of god and get us all sitting around holding hands singing Kumbaya. evil is real.

second, we need to think about how we, as a society, are both creating and failing the mentally ill. progressively gutting our health care system and federal safety net over the last decades has left stranded many mentally ill people and their families with little hope of getting help. Further, apparently, some things have changed in the moral landscape in our society. Fact: when my dad went to school, things were so tough, he had to bring a rifle with him. and when he got to school, he and the other boys set their rifles carefully in the corner of the classroom. when they left for the day, they carried these rifles home, and used them to harvest whatever game they could in season-because it was the depression, and they had to help feed their family. THEY HAD GUNS IN SCHOOL! yet nobody got shot. Why? doing such a thing was unthinkable, atrocious, beyond comprehension. fistfights on the playground to settle disputes? yes, quite often apparently. using a gun to exact revenge on another person? never.
something dramatically has changed in how we value human life.

third, because of #1 & #2, we need to acknowledge that in the foreseeable future, angry young white men are going to continue to attempt mass homicide. this is a simple fact of our contemporary life in america. we didn't need to care in the past, because these types "merely" committed suicide. that die has been broken. many of us could ignore the plight of the mentally ill in the past, because they took their own lives. no longer. this is not an aberration..it is the new normal.

forth, because of #3, what is the "cost" of enduring mass homicide? the NRA has told us that my having access to a bushmaster is worth the lives of 20 innocent kids...and counting. is it? limiting access to the type of mass destruction weapons will not stop the rampage killings...but it will reduce the scope of the destruction.

last word: if you are a gun owner and hunter, this is the time to speak up. drop your NRA membership, drop your Gun Owners of America membership and work with stable minds to come to a sustainable policy on gun ownership.