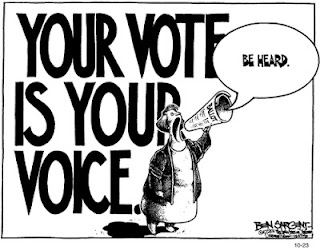 "Democracy is the worst form of government, except for all the others."
Winston Churchill

I love America.  I really do.  I love the diversity of the people, the geography, climates, States, etc.  I think I would be bored to tears in a country that only had a minimal assortment of people and things to look at.  I totally dig the various foods, too.

Don't get me wrong.  There is plenty about this country that drives me nuts.  I hate the arrogance I often see.  It drives me nuts when a politician spouts that "We are the Greatest, blah, blah, blah."  It's rude, and I know they are just brown-nosing me for a vote.  And when it comes to "God Bless America," I think it's time we said "Please."

I also do not like our Neo-Pagan culture, where the God of the bible is reduced to the god of America.  We are extremely idolatrous.  We also have a streak of greed, selfishness and mercilessness that I don't much care for either.

Today is Election Day.  It is when many people choose a new god to worship in office.  For me it's a chance to show my responsibility as a citizen, and I am honored to do so.  I hear doom & gloom from all sides during an election season. (It's been that way from the beginning, and yet we have survived.) I just look at it all as one of the few times I can make my tiny voice possibly heard for a brief moment.

I had heard that there were long lines at the polling stations.  I was in and out in 10 minutes.  Tonight I'll listen to the results.

The handy thing about living in Minnesota generally is that you already know who will win most elections.  I use this as an opportunity some of the time to vote for a minor party so that they might get some recognition...and because I often feel sorry for them and their goofy platform.

It amazes me that so many countries still struggle to insure the right to vote for it's citizens.  I don't understand how or why it should be so complicated.  America has it's issues & problems like any other country.  Still, every once in a while I get to cast a vote without being bribed, shot at or intimidated.

I'm thankful for that.