The Beauty of Grace 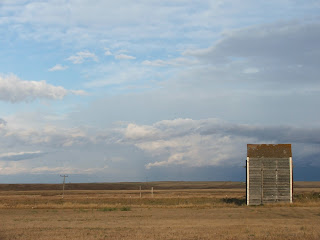 Like the rest, we were by nature objects of wrath. But because of his great love for us, God who is rich in mercy, made us alive in Christ even when we were dead in our transgressions - it is by grace you have been saved.  And God raised us up with Christ and seated us with him in the heavenly realms in Christ Jesus, in order that in the coming ages he might show the incomparable riches of his grace, expressed in his kindness to us in Christ Jesus.  For it is by grace you have been saved, through faith...
Eph. 2:3-10

And the peace of God, which transcends all understanding, will guard your hearts and your minds in Christ Jesus.
Phil. 4:7

I spent an extended weekend in the west of North Dakota just a few days ago.  I think that the cold I had a while ago is coming back with a vengeance as a result.  Either that or I am simply still coughing up dust from that region of the country.

North Dakota is a different mindset altogether.  My family was based in a tiny, un-incorporated town call McGregor. (My mom grew up there until age 9.  I have no idea how she survived without a flushing toilet.) We were there to help my aunt & uncle with an auction as they prepared to move to Arizona for the winter.  The whole affair was a rather surreal experience. 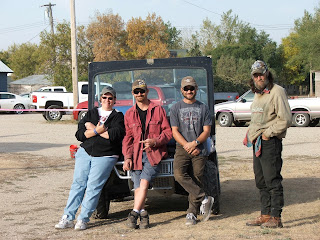 The majority of my relatives from this part of the country are a cross between cowboys, rednecks and the ZZ Top fan club.

They are a most interesting lot and provide immense entertainment.  Despite their rough around the edges appearance, they happen to be some of the most helpful and friendliest people you could meet.

The western portion of North Dakota is in the midst of an oil boom.  An 8-piece fried chicken dinner at KFC will cost you $23. (Ouch!) A hotel room at your basic Motel 6 will run you over $200 for one night.  On the bright side, the result of scads & scads of Semis on the road at all time of day or night gives you more dust for your lungs than you could ever have hoped for. (So you have that going for ya.)

I had never been to an auction before, so that was an experience.  I don't know how an auctioneer does what they do.  It almost sounds like they are speaking in tongues once they get going.  I saw a 100 year old doll sell for $550.  My cousin was able to snag a baseball from the 1987 World Series signed by every member of the Twins for $25. (We purposefully kept it low key once we knew what it was so that others didn't make a bid.) That could fetch him over $500 back in Minnesota.

North Dakota itself is rather bleak.  I'm used to looking ahead and seeing the horizon blocked by trees and rolling hills.  Out there, you can see for miles.  At night the horizon is set aglow by the flames of refineries in the distance.  It is perhaps not my cup of tea, but my aunt & uncle certainly seem to enjoy it...along with many others.

So, for the people of N. Dakota, my relations AND the State itself, this song is for them...and I'll come back to the theme in this song a bit later.


Beauty In The World | Macy Gray from Concord Music Group on Vimeo.

My walk with Jesus is a mess at the best of times.  I am not embarrassed to admit that.  I figure that he already knows, so why pretend otherwise?  This is what makes grace so beautiful.  I don't have to work at it to get him to like me.  He already demonstrated that.

I will say this, though; the older I get, the more the sense of peace that I have.  And I realize that in some ways that will come off as arrogant.  It is not intended that way.  It is not an emotional sense either.  Emotionally, I am about as messed up as the rest of me.  But I do have a sense of peace...an understanding, if you will.

I do not really understand how God's sovereignty works, so I will not pretend in this area either.  I do know/sense/feel/understand that in the end, he knows what he is doing and is in control of the situation.  Like I said, that thought gives me peace.


Most of my relatives are not Believers...like the rest of the population.  And like the rest of the population, myself included, they have their issues, struggles, guilts, fears and so on.  We are all very messy.  Yet, I am more and more convinced that when YHWH looks upon them, he sees beyond their mess and to the beauty of his image in them.  He longs to redeem that image.  The question is whether or not they will let him do it.

I talk with some friends at my store, and I see the same thing in them.  There is a High School girl going through some tough times at the moment that I have become friends with.  She is a very, very sweet kid.  But you can see her pain & questions.  She does not try to hide them. (Which I would argue is a very healthy stand to take.) I do not think she realizes how much Jesus wants to rescue her.

The grace of God is not something that makes all of your problems go away.  Instead, God uses the obstacles in your life to teach you his ways and bring you into a tight walk with him.  It never ceases to amaze me how different God's love is to our own concepts...and it is so much better.

It was fun to talk with my relatives.  Most of them do not much care for "Organized Religion."  I understand what they mean when they say things like this.  I'm not a big fan of that either...pretty sure Jesus wasn't all that keen on it, too.

I will say that when you get past the Poli-Speak that many Christians use, and just get down to speaking in plain, messy English, talking about the kingdom becomes much easier. (I kinda like it that my cousins prefer to hear me cuss just a little when speaking about these subjects...not a lot of blue, just a little bit.) Pretense does not belong to the Gospel.

God calls us to freedom.  A freedom that can only be found in him.  We are slaves to sin until we embrace the grace that I fully believe he extends to all people.  What will you do with that offer?

We strive so hard to earn our freedom, our salvation.  All we do is wrap the chains of slavery around us tighter and tighter when we do this.  The beauty of grace lies in the very definition of the word.  It is offered freely by Christ to anyone who will take it.  Maybe that is why we have such a hard time with the very idea.  We still want to earn it. (Better find a different word to earn.) Just accept it.  It is so much easier that way...in fact, that is the only way.

I find that the more I let go of my striving and simply accept what has already been done on my behalf, the more peace I have.  Again, it is not an emotional state.  It is an understanding.  Sometimes it is easier to understand and accept than at other times, but it is still there.  That type of understanding of peace brings great freedom.

Grace is a beautiful thing.


P.S. For those of you who know I am writing a book, here's an update: Chapter 3 is almost complete.  Once chapter 4 is finished, edited and illustrated, I will be offering them on Amazon.  So far, so good...I think.