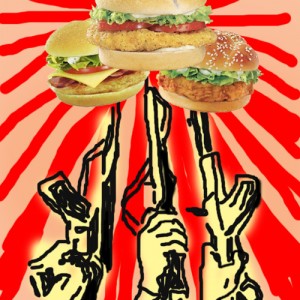 Do not conform any longer to the pattern of this world, but be transformed by the renewing of your mind.  Then you will be able to test and approve what God's will is -- his good, pleasing and perfect will.  Romans 12:2


I have plenty of struggles with my faith.  I do.

On the one hand, I am absolutely convinced beyond a shadow of a doubt that Jesus is exactly who he said he was...GOD.  I believe in his crucifixion and resurrection.  I believe that someday he will return and make all things right. (More and more, I wish that would happen in the next few minutes)

However, on the other hand I have serious problems with his bride, the church...at least the fat, spoiled, arrogant one here in this country.


I'm still waking up, so this may sound angry.  Sorry for that.


I'm sure that I am jumping on the bandwagon at the last minute with this, but that was because I didn't want to at all.

We don't even have them in Minnesota.  I don't know what to make of chicken.  I like it, but then again, Monday nights at my store are a sale night for fried chicken...so I also tend to hate it.

So this week in response to some honest comments by the guy who runs Chick-Fil-A, there was a national uproar of sorts.  The guy who runs that joint had stated his opposition to gay marriage.  Fine.  Whatever.  That's his right. Agree or disagree, it IS HIS RIGHT.

And then the politicians got involved...and the church...and they both danced a beautiful waltz together.  And the more they danced, the angrier it made me.

I've never been a big fan of boycotts.  All they seem to do is hurt the people on the bottom.

In this case, it all went in reverse.  Politicians asked people who are opposed to Gay Marriage to shop at that chicken shack to show their appreciation.  Boy, did that work.

A friend of mine pondered sarcastically if this hadn't been a set up to drum up more business for Chick-Fil-A.  I doubt it, but still.  Makes me want to open up a place and make some controversial comments just to rake in the dough.


For the record, I do not define people by their sexual orientation.  To me it is absurd to define someone that way.  There is a lot more to a human being than who they are aroused by.   To quote myself, "When I hit puberty, I was saluting the flag anytime the wind blew on me.  Should I be defined by that?"

But the church got suckered.  It bought the World's definition.  It allowed itself to begin defining people by this issue instead of the biblical one, which is to view people as image bearers.  I.e., every person on this planet is the image of God. (Whether they believe in God or not.)

Think how different things would be if we all walked around with that in the forefront of our minds.

And now the American church is slowly but surely having it's butt handed to it on a silver platter in the culture wars.  That was a war we lost the moment we decided to fight it.  We took the tools of this world, and told Jesus to take a back seat.  We made a god out of causes, and took the bait hook, line and sinker that Satan had laid for us.

We can't seem to admit it, but we are losing spectacularly...and we deserve it!

So this morning I woke up to a posting from a friend.  It triggered the problem that I have with American politics getting mixed with the church.  You do not treat Christ like a whore!  It's one of my buttons, and it seems to get pushed a lot.

From the desk of: http://formerconservative.wordpress.com/2012/08/03/dear-republican-party/


Yesterday made it clear to me that you have managed to get your politics hopelessly entangled into the way Christianity is viewed in this country to the point that I’m not sure it can be untangled. You’ve made everything a holy war from what eat to who we vote for. You’ve managed to instill fear and suspicion towards those of other faiths (I’m looking at you Michele Bachmann), those who do not believe, and those of differing sexual orientations all for your own power.
My faith is important to me. My faith is beautiful and meaningful to me. Christian community is important to me. Yesterday was the result of your twisting Christianity for power and political advancement. It made Christianity into something vindictive and ugly. I detest what you’ve done to my religion. After yesterday though I’m afraid that I may be in the minority and that is very depressing to me.


Matthew Paul Turner wrote a post for his blog that I thought was brilliant.  I'll quote a piece from it here, but you really should read the whole thing.

This is the quote that really got to me; "By rallying behind CFA, Christians put an issue above people. And it’s impossible to follow Jesus when issues trump people. Jesus never said “love God, love causes.” That is not the message that gets preached in churches all over America on Sunday mornings. I’ve heard a hundred different explanations from patrons of yesterday’s rally and nearly every one of them gives precedence to “the cause”. We can’t embrace love, mercy, hope, and peace when our causes (or a place of business) trumps people."


Jesus never seemed to speak directly about homosexuality.  He did indirectly, but never explicitly.  If he ever did speak publicly about it, we don't have a record of it.  Maybe he did that on purpose.  Maybe he wanted to test his church...or at least some members of his church.  I wonder how many are passing that test?

I've heard hard-core, true Believers come down on various sides of this issue...and I do have my own thoughts on it.  But I start by not wishing to define anyone by their sex drive. (Again, it just seems idiotic to me.) That having been said, out of respect for my friends who do define themselves this way, I will reluctantly use the term Gay People when speaking with them. (See, I even used a lovely pink shade.)

And here is my final thought to the members of the American church...and for some crazy reason I have a feeling that Jesus would support me on this one.  If you do not have "Gay" friends that you associate with...and by that I mean to actually hang out with in true friendship with no ulterior motives attached, if you do not have a trusting relationship with them, to know their lives, their pain, their secrets, their struggles, their joys...their lives.  If you do not have that, then you have virtually no right to speak on this issue.


Please do Jesus a favor and simply shut the hell up!