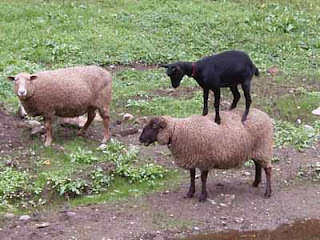 When the son of man comes in his glory, and all the angels with him, he will sit on his throne in heavenly glory.  All the NATIONS will be gathered before him, and he will separate the people one from another as a shepherd separates the sheep from the goats...Then the King will say to those on his right, "Come, you who are blessed by my Father; take your inheritance, the kingdom prepared for you since the creation of the world.  For I was hungry and you gave me something to eat, I was thirsty and you gave me something to drink, I was a stranger and you invited me in, I needed clothes and you clothed me, I was sick and you looked after me, I was in prison and you came to visit me."


Then the righteous will answer him, "Lord, when did we do all of that awesome stuff, cause we're kinda clueless here?" (My edit for the sake of space & time.)


The King will reply, "I tell you the truth, whatever you did for one of these brothers of mine, you did for me."


Then he will say to those on his left, "Depart from me, you who are cursed, into the eternal fire prepared for the devil and his angels.  For I was... (Repeat the second half of the first paragraph)


They will answer, "Lord, when didn't we do all of that awesome stuff?"


So yesterday at Living Waters, Scott was preaching a series on difficult passages & parables.  Yesterday's text was the above...minus my edits.  Today, at the gym, I was listening to a podcast from Imago Dei, and it happened to be on the very same passage.  Go figure.

Oddly enough, this is one of my top favorite parables of Jesus.  But it is also a very chilling passage if you stop to consider it for awhile.  There is quite a bit going on in this parable, much of which we often choose to ignore.  I figured that I would put down my own thoughts, and hopefully none of them will be too heretical.

For starters, this is indeed a passage about judgement.  It's difficult to escape that.  It is a judgment that encompasses all of humanity, but those who call themselves Christians seem to stick out.  Second, despite what some might jump to as a conclusion, it is not a passage about salvation by "Works."

There IS a debate as to who exactly Jesus is talking to here.  Is he talking to only those who claimed to follow him?  Or is he talking to everyone?  I err on the side that he is actually talking to both...but that it is a particular warning to those who claim to follow him, i.e. "Christians."  For starters, it says that on judgment day "All Nations" are gathered in front of him.  So this would indicate pretty much every person who ever existed.  Everyone is calling him "Lord." (Which could indicate only those who claimed to follow him, but also, since it IS judgment day, and everyone recognizes Jesus for who he really is, and therefor obviously refers to him as "Lord," that it could include the entire human race.)


Now, the separation that occurs IS a result of behavior.  That having been said, it still is not salvation by works.  No!  No one gets into heaven because of their morality or nice behavior.  You can keep your legs crossed until you die, and help every old lady you see across the streets.  You still will not impress the Holy One. (Your casket will say, "Returned unopened" with a big smily face and numerous gold stars on it...and that's as far as it goes.) Salvation is by grace, and grace alone.  "Abraham believed God, and it was credited to him as righteousness."

The first can only be created by the Holy Spirit.  When a person turns their nasty, little, sin-filled heart over to Christ, he sends his spirit into that person marking them as his for good. (Eph. 1:3-14) And it's at that point that the Spirit begins that whole Sanctification thing that makes Believers look more and more like Jesus over time.  Anything other than that is you trying to fix yourself on your own...and that never works out very well.

The best way I can sum up this entire passage is this, but forgive me, because I do not know the author of this quote:


I like fireworks.  I liked them more as a kid.  Now, I tend not to blow things up as much much because it freaks out my dog.  Still, from time to time, I loves me a good ol' bottle rocket.  I like to shoot them out over the lake.  Sometimes, I like to shoot them in to the lake to watch them blow up under the water.

There have been times where I have lit one and it appeared to go out...only to blow up 30 seconds later.  I have learned the hard way not to approach a bottle rocket for a minute or two, even if it appears to be a dud.

There have been times where one of my rockets has gone sailing into the yard, but did not explode...at first.  I always warn folks not to touch those rockets.  You can probably figure out why.  If they listen and believe me, they will not touch the rocket.  Their belief will result in action.


So, let's say that I decide to plant a few M-80s under your chair. (Shame on me!) I am merely curious as to what will occur once said bomb goes off under your plastic lawn chair...plus, I have a long fuse so that it will give me a few minutes to hide behind something safe.  Unfortunately, you decide that now would be a great time to sit in the sun and begin Tolstoy's "War & Peace."  I am a prankster, but not a malicious one.  So I warn you of the impending experiment in minor explosives and gravity.


If you believe me, what will you do?

You can speak with your lips that you not only hear me, but that you believe the truth of what I am saying, but if that belief does not result in action...do you really believe?  If you say that you believe, but then sit in that chair anyway!  Well, off to Goatland for your behind and that poor chair.


True belief will always result in some type of action.


It would appear that Jesus is warning his followers, "Listen, if you really follow me, you will live a different way.  You wont be able to help yourself.  You just will!  That crazy spirit of mine will just make you do it because you really want to.  If you aren't living that way, then you might want to ask yourself if my spirit is there at all."

None of this is a matter of perfection.  Jesus never promised that until the final day of redemption.  It is more a matter of being a fruit tree. (Matt. 7:15-23, and Gal. 5:22-26) If you are anything like me, my tree needs plenty of pruning.  And the Spirit does exactly that to make an actual Believer produce his fruit.

One item of note that Scott pointed out yesterday was the reaction of those that Jesus was speaking to.  They all seemed surprised.  The folks who had been living a certain way in which the "Least of These" were being cared for, didn't realize that they had been doing so.  Same for the second group, except in reverse.

BTW: Don't let yourself be taken by the idea that Jesus is only referring to the "Least of these...my brothers," as other Christians.  He doesn't use that term with the second group.  He simply calls them "Least."  Certainly Believers are to take care of their own, but they should never stop there.  How we live out our faith everyday, in every way and circumstance...and with every other person, says a great deal about where our hearts are.

The Western mind-set is interesting.  It has it's roots in Socrates & Plato.  It is often very Gnostic.  For Protestants in particular, head knowledge is of paramount importance.  We elevate it above all else...to our own peril.  Certainly there is an important place for such things.  But at least in America, the church is often content with just that.  It makes us live in a bubble.  And that bubble is better when it gets smaller.

So we pray a prayer, sign a card at church camp...and then we burn some secular CDs for good measure. (Burning Modern Jazz CDs and anything by Garth Brooks is acceptable.  Satan co-wrote all of that anyway.) All is right with the world.  We have our "Get out of Hell" ticket, so now we can hide in our churches and bible studies...with all of our "Christian" friends.  We will not engage this fallen world unless it is to vote on a select few issues that some talking head told us was all that Jesus cared about...and often they will make them up for Jesus.  Maybe, from time to time, we will go out and "Be a Witness."  We will hand out really poor tracts, hold up some signs, yell...or maybe just evangelize total strangers who we know nothing about but know that they are "Sinners," so we will tell them so and feel good about ourselves even though they thought about pepper spraying us before they fled.


That and a dollar wont even buy a cup of coffee anymore.

I don't think Jesus will be surprised...but he will probably be very sad.

And here is a song for his American Bride...

It's just a thought.