The Peace of Dietrich & the Suffering of God 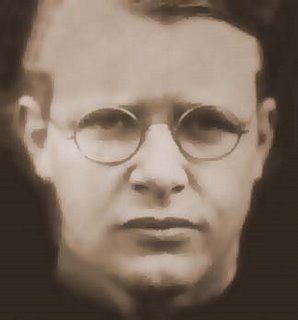 Through the half-open door in one room of the huts I saw Pastor Bonhoeffer, before taking off his prison garb, kneeling on the floor praying fervently to God.  I was most deeply moved by the way this lovable man prayed, so devout and so certain that God heard his prayer.  At the place of execution, he again said a short prayer and then climbed the steps to the gallows, brave and composed.  His death ensued after a few seconds.  In the almost fifty years that I worked as a doctor, I have hardley ever seen a man die so entirely submissive to the will of God.
H. Fischer-Hullstrung

I woke up very early this morning.  I often have trouble sleeping.  So what do you do when that happens?  Well, if you're me, to try to get some reading in.  And this morning I finished the 542 pages of Eric Metaxas' whopper of a book titled, "Bonhoeffer: Pastor, Prophet, Martyr, Spy."


It was by far one of the most beautifully written books I have come across in ages.

If you do not know who Dietrich Bonhoeffer was, suffice it to say that he was one of the greatest Christian minds of the 20th century.  Born in to an aristocratic and highly educated family in Germany, he was one of the few to stand up to Adolf Hitler and the demonic forces of Nazism.  Even though he had numerous chances to escape persecution, he chose instead to stay in Germany for his parishioners and his patriotism, and joined the plot to destroy the Nazis.  As a result, his life was required from him.

Here is a brief synopsis.


A few days ago, I saw a posting on Face Book about a fellow in Arizona who is being "Persecuted" for his faith.  Apparently, this fellow has been holding worship services in his backyard on Sunday mornings.  As I understand it, he has even built some barn-like structure back there.  Needless to say, the neighbors are not thrilled about both the noise and the cars parked all over their street.  The authorities were not amused either.

This man, who is a pastor, has flat out told the authorities that he is not holding church services, and that he simply built an extremely large recreation room in his back yard.  As I understand it, he has been arrested for fire & safety code violations on his not-a-church building that simply has large masses of people at the same time every Sunday, playing games while singing about Jesus, and then hearing a casual lecture from their host that just happens to contain a sermon illustration...while playing foosball.


That poor pastor!  What a victim.

Bonhoeffer thought it the plain duty of the Christian--and the privilege and honor--to suffer with those who suffered.  He knew that is was a privilege to be allowed by God to partake of the suffering of the Jews who had died in this place before him.  According to Schlabrendorff, the crematorium at Flossenburg was not working, so the bodies of the men hanged that morning were burned in piles, and in this, too, he had the honor to be joined to the millions of other victims of the Third Reich.
Eric Metaxas

I largely view the Americanized church to be a bad joke.  We assume that this country is ours by divine right.  I have even heard of people from outside the U.S. say that to Americans, America itself is God.  We have certainly joined many other groups in growing and nurturing a victim mentality.  In America, the church is not a "Victim"...except of itself.  The church does not "Suffer."

Yet God does suffer.  I realize that more & more.  And I am coming to believe that in suffering, we draw very close to God...or perhaps he draws us to him.

It was through the suffering of Christ, that humanity has been offered redemption.  The suffering of Christ was deeper and more painful that we could possibly imagine.  The God of the bible, the God who became flesh & blood so as to identify with fallen humanity, and become the very problem (Sin) that poisons our relationship with the divine.

He had hardly finished his last prayer when the door opened and two evil looking men in civilian clothes came in and said: "Prisoner Bonhoeffer.  Get ready to come with us."  Those words "Come with us"--for all prisoners they had come to mean one thing only--the scaffold.  We bade him goodbye--he drew me aside--"This is the end," he said.  "For me the beginning of life."
Payne Best


No one has yet believed in God and the kingdom of God, no one has yet heard about the realm of the resurrected, and not been homesick from that our, waiting and looking forward joyfully to being released from bodily existence...Death is hell and night and cold, if it is not transformed by our faith.  But that is just what is so marvelous, that we now can transform death.
Dietrich Bonhoeffer


You have faith, hope & love.
But you also have no fear...of anything.

And you have perfect, perfect peace.

To the one in whom the God of the bible teaches this lesson, they could never be stopped.  That person is already with God.


"Simply suffering--that is what will be needed then--not paries, blows or thrusts such as may still be possible or admissible in the preliminary fight, the real struggle that perhaps lies ahead must simply be to suffer faithfully." (Bonhoeffer)


It's hard to escape the conclusion that Bonhoeffer was somehow thinking prophetically, that somehow he could he could see what was ahead for him, that at some point he would be able to do nothing more than "Suffer Faithfully" in his cell, praising God as he did so, thanking him for the high privilege of being counted worthy to do so.
Page 196


I wept a great deal reading this book.

Someday, I would like to be half the man that Dietrich Bonhoeffer was and still is.