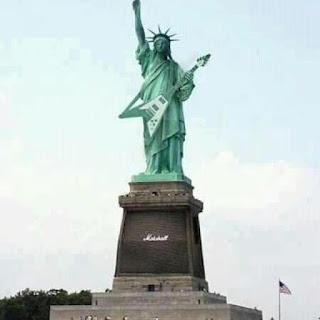 And I heard a loud voice from the throne saying "Now the dwelling of God is with men, and he will live with them.  They will be his people, and God himself will be with them and be their God.  He will wipe every tear from their eyes.  There will be no more death or mourning or crying or pain, for the old order of things has passed away."
Rev. 21:3&4

So yesterday was July 4th, Independence Day.  As usual, I had to work on it.  That's not such a bad thing.  We have been having a truly brutal heat wave, so staying inside is a decent option.  Plus, the fireworks really freak my dog out.

Last night at work, a buddy of mine showed me a clip from a new HBO series.  I thought it was brilliant!  I'll show it later, but first...

Ooo, wait!  Let me set out this caveat, first: I love America!  I really do.  I think that we were incredibly fortunate to have the Founding Fathers that we did.  It was the perfect timing of the Enlightenment meeting the founding of an amazing experiment.  America is unique in that in many respects, it was an idea before it became a nation.  As such, it was the first nation, to my knowledge anyway, that was not based on ethnicity, so much as it was based on a philosophy of how people should be governed.  I am also very happy that I live here.  I vote in every election...even little municipal ones.  I pay my taxes.  I support our troops.  I love cops and firefighters.  The only law that I knowingly break is that I enjoy going over the posted speed limit. (OK, from time to time, I also kick kittens and bunnies.)

And now that I stated the above...

For starters, anytime I hear a politician say that we are the greatest, it always feels like they are trying to kiss my back-side.  Seriously, stop doing that!  Don't brown-nose me for your vote.  You just say that because you know it's a handy catch phrase, and if you don't say it your opponent will hit you with it.

Secondly, do we have any idea how idiotic, rude and arrogant that phrase sounds to people from other countries?  I have friends from Canada, the Czech Republic, Mexico, Nigeria and South Africa.  What are they supposed to say when they hear us spout that line?  "Yeah, dude, my country sucks!  Yours is so much better."

And as far as "God Bless America" is concerned, how dare we insist that God bless us?  I wouldn't mind it at all if I saw bumper stickers that said "Please God, Bless America."  That would be much more fitting.  What are we, a country of Health & Wealth, prosperity freaks that treat the Holy One like some cosmic genie? (Just rub the bible and God will grant our wish.) For what reason do we presume that God has to bless us simply because we say that phrase?

Over the weekend, I got into a little spat with a fellow who accused me of ranting.  I wasn't, but I did commit the sin of pushing his buttons a bit.  It's a bad habit of mine.  I have a difficult time resisting messing with people who leave a door open so wide that you could drive a truck through.  So I pushed a few and he kind of popped a bolt.  In the end, I don't think I was doing the ranting.

Anyway, since I was accused of ranting, I figured today was as good as any to actually do one.  So here it is...

America is a contradiction.  We believe in personal responsibility, but don't actually mean it.  As soon as you try to hold people accountable, you are accused of violating personal freedoms.  At the same time, we really aren't supposed to help people, because that would also violate your personal freedom...unless it's voluntary, at which point the majority of us say "No."  And then, each person's definition of freedom seems to be different.

The fellow that I mentioned above used a phrase that I have heard before.  He was annoyed with me because I had said that, over all, I thought the new healthcare law was decent because it meant that almost everyone would now have some kind of health insurance. (I never said, nor will say, that it is perfect.)

Feel free to read what I posted that got a few people so hot & bothered.
http://www.trippingandstumbling.com/2012/06/american-sodomy.html
Pop your own bolt too, if it pleases you.

N-E-Way, so he says in response to the idea that our taxes should be used to aid the less fortunate, "You would subject your fellow citizens to slaver?" (Key the sound of brakes screeching.) Slavery?  Paying taxes is the same as slavery?

To be fair, I didn't know the guy was a Libertarian at first.  I guess the whole concept of income tax, sales tax, property tax, etc. is a type of slavery to those folks, so they bristle at the thought. (Much like my bristling at the posted speed limits.)

Now, I've listened to a few folks who actually have been slaves in this modern era.  The sex slave business is still booming around the world and in this country.  Plain old regular slavery is still robust in certain areas, too.  This country has it's own history of slavery. (Hey, the Czar freed the slaves of Imperial Russia before we had to fight a war to free our own.) So for the life of me, I had no idea that you could equate paying taxes with slavery.  Makes you wonder what Harriet Tubman would say if she heard that.

To be fair, this country was kind of founded on that thought towards taxes.  The colonies didn't want to pay taxes to help the motherland pay off the 100 million pound debt it had spent protecting us from the Frogs in the French & Indian war.  God forbid we should pony up the dough for our own defense.  So we accuse the King of England of enslaving us with taxes.  See, taxes equal slavery!

And when we do gain our independence? 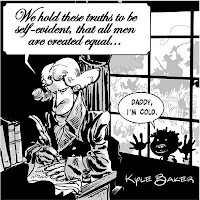 Oddly enough, John MacArthur, who I am not exactly a fan of, says that America was born in sin because it violated Romans 13:1-7.  I'm happy that we have our independence, but I'm not sure that shooting people over taxes is the best way to handle that issue.

So another friend of mine said the other day that prays that America will repent.  In his case, he generally means for us to repent of our modern sexual sins and increasing secularism.  I would like to point out that there is nothing modern about either. (See the above cartoon.) This country has been messed up sexually from the beginning. (Just ask Washington and Jefferson's female slaves about certain romps.) What do you expect when Ben Franklin can't seem to keep his pants on?

But let us not forget that all of these founders were "Born-Again Christians" who got the United States to ask Jesus into it's heart to be it's own personal Lord & Savior on July 4, 1776.

Believe it or not, there are people out there who actually say that Jesus helped write the Constitution.  A fellow named David Barton actually says that everything in the Constitution can be found in the bible.  Which is true!  Both documents are full of vowels, consonants, adverbs and adjectives...nouns too.

Other than making a lot of money off of incredibly gullible people who want to have their ears tickled, Barton is a leader in the Neo-Pagan movement, where the cross of Christ is wrapped in the American flag while Jesus flies an F-16 across it.

Does this country need to repent?  You bet it does!  And it and every other kingdom of man has needed to repent from their inceptions on up to today.  And they need to repent for a lot more than sexual immorality so that we can regain some mythical past where everyone could sign Bethel Universities' statement of faith...and then head on down to the slave quarters for a good ol' "Rogering" topped off with the breaking of an indian treaty here and there.

The following video is the opening scene of HBO's new series "The Newsroom."  I hardly ever watch TV, which means I live under a rock according to some, so I haven't seen the show yet.  But this is what my buddy showed me at work last night.  I'll warn you in advance that it has profanity in it.  That having been said, I love this clip.  It pretty much sums up my feelings about this country and our current hyper-partisan climate.

Ooo, a couple more things before I stop my rant.

#1. I'll quote Monty Python for this part; Democrats, Republicans,  Conservatives and Liberals...You empty headed animal food trough wipers!  Marxist, Socialists and especially you lunatic Libertarians...I fart in your general direction!  You brainless, drones of the TEAbag movement and your Koch Brother masters, AND you spineless, leaderless, pointless members of the O.W.S. monement...your mother was a hamster, and your father smelt of elderberries!

He who testifies to these things says, "Yes, I am coming soon."  Amen.  Come, Lord Jesus.

P.S. As reward for putting up with my rant, I shall now give you a handy way for you to show your dissatisfaction at our Fascist/Socialist overlords and their theft of our liberty.  By simply following the sage wisdom & advice of Sammy Hagar, you too can stick it to the man.