A Post of no Substance: Just a concert review. 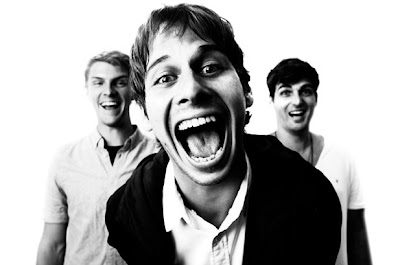 So yesterday I had a bit of a surprise in store for me...and a rather pleasant one at that.  A friend of mine at work had won two tickets for a concert that night, but was unable to attend due to her shameless addiction to quilting.  So that morning she messages me that she can't go and would I mind taking her place and her son along to the show so that she could make another bed spread.

So at 6pm I picked up her son, Charlie, and off we went while Julie, his mom, spent the evening fondling balls of yarn & twine.

It should be stated for the record that a night out for a show must included the requisite stop at Fat Lorenzo's by Lake Nokomis for pizza.  Anything less would be a grave sin. (Best part is you get left-overs that make your car smell most awesome afterwards.)

The show was of the up & coming band, Foster the People.  The opener for the show was Kimbra, who I am mildly familiar with, and then Tokyo Police Club...who I was clueless about.
http://www.fosterthepeople.com/us/home


I don't get to see shows very often anymore.  The price of most tickets are obscene, to say the least.  Then you tack on the charges of the legal mafia known as Ticket Master, and it's like going to the proctologist in January...and he's just been out making snowballs.  So, free tickets is a godsend.

My friend who scored the tickets, has a 16 year old son named Charlie.  Charlie seems to be some kind of wunderkind, who plays 5 different instruments, was on the local High School swimming team while still in Junior High, plays in a bunch of bands...and still maintains a very good GPA.  All of this achieved under a truly incredible mop of hair. (I'm working on a cartoon character based on him.)

I don't think he gets to downtown Minneapolis very much, so it was fun to watch his reactions.  It was a beautiful evening with perfect weather.  There was also a Twins game, and it was the opening weekend of the big Pride festival.  So there certainly was plenty to view.  Aside from the usual assortment of folks out on the town eating on sidewalk restaurants, there were also panhandlers, lots of cops...and scores of way-to-pretty young men who appeared greased up like a Christmas Turkeys. (No offense, but you aren't doing your side any favor if you act like a stereotype.  Save the formal thong for a less public location.)

Like any city, Minneapolis & St. Paul have their unsavory and potentially dangerous parts.  This area of downtown really isn't one of them.  There is enough of a saturation of oddballs that they tend to dilute themselves.  Plus, even though in my heart I am nothing more than a cowardly teddy bear, people tell me that I look like a bouncer.  So, I never really worry much.


My initial observation of the crowd at the Target Center was interesting to me.  It really made me realize how old I am getting.  I think the last time I went to a major concert was of Neil Young (My hero), and that included numerous folks older than me, bikers, hippies...and oddly enough lawyer & banker types who were clearly on something during the show.

Seriously, I have NEVER understood the concept of getting stoned at a concert.  Why in the world would shell out that kind of money for a ticket, and then get such a brain melt that you can't remember a thing?  Put the CD on at home, sit on your couch, get high and ruin your brain cells in private.  I really do not wish to see you act an idiot in public!

Thankfully, I didn't see any of that stupidity at the show.  In fact, I didn't see anyone smoking at all...which is a little odd.  Still it was nice to not have to put up with that.  It was also nice to see so many parents bonding with their kids.  I think it is very cool to see a mom dancing with her daughter over music that they both clearly enjoy. (My mind's eye guesses that normally it would be a parent suffering under the squeals of tween girls at a Justin Bieber concert.) Mostly though, the crowd appeared to be late High School and 20-somethings in either Preppy or Hipster attire.

BTW: Listen kids and wanna-be Hipsters, if you haven't gotten a tattoo just yet don't bother!  That fad has just about crested. About 5 years from now, it will pretty much be over and those who decided to scar that nasty stuff all over themselves will be taking out student loans to get them removed.  "I'm sorry Mz. Jensen.  You have all of the qualifications for this management position, but the customers keep mistaking you for a  hooker."  Remember, you can always cut your mullet off.


First up with Kimbra.  http://www.kimbramusic.com/frontpage  You might be a bit familiar with her thanks to Gotye's song "Somebody that I used to know." (A bit overplayed, but enjoyable none the less.) Kimbra sings on it with the memorable lines "Now and then I think of all the times you screwed me over," which we can all probably relate to in some form.  She is a 22 year old Kiwi, out of New Zealand.

I thought that she was cute, funny in a purposely forced "Barbi" kind of way, and was extremely nice & polite.  She also had some interesting beats.  I'll let you decide for yourself.

What I hadn't realized about Kimbra is that just a while back, she had collaborated with Mark Foster of Foster the People to make this next song.  Once FTP were playing their set, they had Kimbra and her band come back on and they all played it together.  Very cool.

Yes, that is Mark Foster, Kimbra & DJ A-Trk all giving tubby a good beating at the end of the video.

Next up was a band out of Toronto...Canada at least, Tokyo Police Club.  I had never heard of these guys before.  At first, I thought the lead singer's voice was rather flat.  OK, it was flat.  Still, as they went on I found myself enjoying more and more the sounds they were making.  The guitarist and keyboard players really made some cool noises.  Guess I'll have to dig a little deeper in these Mooseheads.


Last but not least, Foster the People.  It was barely a year ago, in March, when they played at the 7th St. Entry (Attached to First Avenue) which is really small.  By May they were back at the Fine Line cafe.  Now, they are headlining at the Target Center.  Not bad.

I think what I appreciate about the band as a whole is that even though they have achieved quite a bit of success in what would appear from the outside to be a short amount of time, AND that they all look like they walked out of an Abercrombie & Fitch ad, they never come off as stuck up or preening. (Which is really saying something for most musicians.) In fact, Mark Foster, who apparently does all of the talking, came off as very humble and appreciative.

Better still was their performance.  This is one tight band!  They only really have enough songs to do about an hour, but they worked it!  Also, I have to say that you kinda get used to the visual spectacles that most shows have now, but these guys really had some interesting affects that complimented their songs.  The icing on the cake was that they had a marching band horn section come out on stage for the final song, Houdini, while another marching ensemble worked it's way into the crowd on the dance floor.  That was a surprisingly beautiful touch.

I always like it when a band uses a live performance to shake up what you would normally expect from the CD version.  These guys worked it in spades.

I gotta say, this really was one of the best shows that I have seen & heard in years.  Good job, boys.

See, nothing of any particularly deep spiritual substance this time around.  Just some fun.  Hey, I like to share.  Hope the rest of your weekend is great.

P.S. Oh, and for those of you heading downtown for the Pride thing, remember what I said about the thongs.  :)