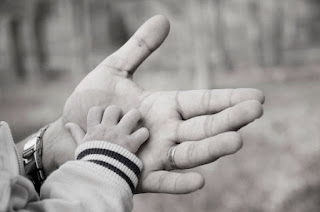 Praise be to the God and Father of our Lord Jesus Christ, who has blessed us in the heavenly realms with every spiritual blessing in Christ.  For he chose us in him before the creation of the world to be holy and blameless in his sight.  In love he predestined us to be adopted as his sons through Jesus Christ.
Eph. 1:3-5


Because you are sons, God sent the Spirit of his son into our hearts, the Spirit who calls out, "Abba, Father." So you are no longer a slave, but a son; and since you are a son, God has made you also an heir. Gal. 4:6 & 7

"The central revelation of Jesus Christ in the New Testament is that God is Abba, Daddy."
Brennan Manning


Two days ago was Father's Day.  My family celebrated with my Dad's favorite dish, meat loaf.  I scored a good one by purchasing an awesome pair of Van's for my Dad.  Even well into his 70s, my Dad can still look hip & groovy with some pumped-up kicks.

Maybe it is the curse of being a male child, but there is always this nagging sensation in the back of my mind that I have not lived up to my father's expectations, and/or that I am somewhat of a disappointment.  Even though I know that such a feeling is completely bogus in my case, I still have those feelings from time to time.  I would guess that this is fairly common.

At the same time, I know for a fact that my Dad has lived vicariously through me at various times.  Thankfully not like some of those nut-bag dads out there who scream at their boys to run faster, hit the ball harder, etc...and then go beat up the umpire.  I would guess that living vicariously through their offspring is fairly common for fathers, too.


Many people often wonder why the God of the bible chose a male pronoun for himself.  I mean, being a spirit, it's not like he actually has male body parts.  Although, in his incarnate form as Jesus, he is both male and Jewish. (Oy!) But why did he pick that?  Why can't we say "Our mother, who is in heaven?"

I remember back at Bethel College, there were some pseudo-feminists who got all hot & bothered over this issue.  Personally, I found their protestations kinda funny.  Perhaps that makes me a bad and insensitive person.  Oh well.  For most folks, I doubt it is ever much of an issue.  However, more and more I am starting to think that it should be.

I'm adopted.  It's never been an issue for me.  Actually, it does kind of bug me...in a mildly amusing way, when people ask me questions along the lines of "So, do you know who your real parents are?"  I always use that as a teachable moment and correct them.  I will say that the folks who raised me are my real parents.  Who ever it was that got my birth mother pregnant, and obviously the women who birthed me, are not my parents.  They are my bio-parents and donors, but they were not and are not my "Real" parents.  There is a lot more to being a parent than simply getting someone pregnant and giving birth.

Like I said, it's never been an issue for me.  I guess I must have found out that I was adopted around age 7.  I had a friend at my school who was also adopted.  When we discovered this, we both thought it was most awesome!  We actually thought that this made us better than everyone else. (No joke.) We understood that we had been chosen and hand-picked.


Not to be cruel, but look what your parent's got.


Also, on a side note, when I was four I came into the house to see a man sitting in the living room with my parents.  They all informed me that they were planning on getting me a baby sister.  Upon hearing this I went out to his car and proceeded to look in the windows to see where her package was.  I didn't see any signs of a sister in the back seat, so I went back in the house to observe that she must be in the trunk and shouldn't she be let out because it was going to get hot in there.


I have worked with, and have seen, the results of people who never should have been parents.  More often than not, there is no dad in the picture.  If he is around, he is usually a male-stereotype.  The best he can depart to his own son is the hyper-masculine crap that insures that his son will grow up to be as dumb as he is, but can beat up other guys, knock women around, get gals pregnant and then demonstrate the ability to disappear like magic.

A parent is someone who gives their all to a child.  They wipe their runny noses and poopy bottoms.  They teach them right from wrong.  They love them unconditionally and demonstrate this love with proper discipline.  As you can see, biology plays a minor role in being a parent.  As such, a parent can be a grandfather, an uncle, even a neighbor...and certainly someone who adopts you.  In my case, I couldn't have asked for better parents, nor could I have asked for a better Dad, specifically.

To quote our oft-maligned President, Barack Obama; "Any fool can get a woman pregnant.  But it takes a real man to raise a child."


Brennan Manning is a liar and a drunk.  While he is still alive, he has slowly been killing himself with alcohol.  He has had a problem with the bottle and truth for a long time.  He also openly and readily admits these problems.  I trust him because of his admissions, where as I do NOT trust others who call themselves "Christians" who show no battle scars.  Manning knows what it is like to suffer for Grace.  As a result, Brennan Manning has an understanding of Grace that few in this age ever will.  In fact, Manning is routinely trashed because of his failings and his emphasis on Grace by those who can't seem to handle the fact that Manning is correct about how much the God of the bible loves us. (Surely, there has got to be some secret method to earning Grace, damn it!)

Manning has also written some of the finest and most difficult books I have ever read.  They are difficult not because the concepts are hard to understand, but because they are so easy.  It is difficult not to find your own broken & sinful self on every page, and to have hidden pains, secrets, guilts and shames exposed.  For Believers The Ragamuffin Gospel will most likely go down as one of the most important works of the last 100 years. (If you haven't read it, you really should.)

I cannot watch the following video with out starting to bawl my eyes out every time.  So be it.  Give it a gander.


"The central revelation of Jesus Christ in the New Testament is that God is Abba, Daddy." (And thats where I start bawling.)

Why did the God of the bible pick a male pronoun for himself?  Why is the incarnation of God a man?  Why, if Manning is correct, why is the central revelation of this incarnate God known as Jesus that we can now call this God "Daddy?"


Look around you and I think you will know why.

YHWH is no fool.  The bible is a narrative of God's pursuit for, and love of, humanity.  It is replete with patriarchs, kings and lesser men who were all sinners.  They were liars, adulterers, murders, thieves...and fathers.

He knew that finite men could never be the "Men" that our children require.  So he is the model for all to follow.


Admittedly, his ways are not our ways...which I am very thankful for.  Nor is his love like our love.  Just as my earthly father did things for my benefit that I did not understand at the time, so to with this father.


I love my Dad.  I love the time that we spend fishing.  We discuss many things when we are together.  We pick each other's brains.  I am always impressed that my Dad is so curious, and I enjoy watching my Dad learn new things.  Old dogs can always learn new tricks.  We talk about politics, world issues, the weather...Scripture.  I love it.

I believe in the the physicality of the New Heaven & Earth.  I am not a Platonic Gnostic who thinks we will waste our time as mere spirit beings floating about clouds while we play harps. (If that's the case, I really don't want to go.) No, I believe in the visions of the prophet Ezekiel.  In the New Heaven & Earth.  There will be FISHING! (Ez. 47) My Dad & I shall continue our conversations, and probably let Jesus get a word in every once in a while while we fish.


I love my Dad and am most thankful for him and that I was adopted by him and my Mom.


However, I am more thankful for my "Abba,"...who is in heaven.  I am thankful for my adoption into his home.  I am now his son.  I am an heir to all that Christ has done and is.

He does not see me as I often do.  He was well aware of all my imperfections, failures, lackings and sin long before I was.  Because of the gift of himself, I am no longer a disappointment, but am holy & blameless in his sight because his spirit lives in me...and in his eyes, I look just like him.

And when I grow up, I want to be just like him.