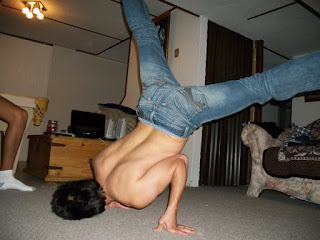 YHWH said to Joshua, son of Nun, Moses aide:"...As I was with Moses, so I will be with you; I will never leave you or forsake you...Have I not commanded you?  Do not be terrified; do not be discouraged, for YHWH your God will be with you where ever you go."
Joshua 1:2 & 5

"For he chose us in him before the creation of the world to be holy & blameless in his sight.  In love he he predestined us to be adopted as his sons through Jesus Christ, in accordance with his pleasure & will....Having believed, you were marked in him with a seal, the promised Holy Spirit, who is a deposit guaranteeing our inheritance..."
Eph. 1:4 & 5, 13 & 14


Open up.
Open up your heart to me now.
Let it all come pouring out.
There's nothing I can't take.

And if you feel the fading of the light.
And you're too weak to carry on the fight.
And all your friends that you count on have disappeared.
I'll be here not gone, forever holding on.

If your sky is falling, just take my hand and hold it.
You don't have to be alone, alone yeah.
I won't let you go.
James Morrison

I can't say that I understand the whole concept of Predestination.  I'm not sure I really want to, either.  I mean, I believe in it.  I'm just not sure how it works.  Hard core Calvinists will argue that there is no such thing as free-will, and that God just predetermines everything from catastrophes to nose pickings AND including your salvation...or lack there of.  Arminians will argue that predestination is based on God's foreknowledge of your choices.

My own thought on this came from something I heard Rick Mckinley say about it once; "God has the first word.  God has the last word."  Once upon a time in college, a Professor said to me on the above portions from Ephesians; "What God starts, he finishes."  I think I'll stick with those two.


The point is that God is faithful and he wont let you go.


So this morning I was talking via the internet with a buddy who is off in Afghanistan.  He is busy with war, reading Sun Tzu and growing a mustache that looks like something from an Adult movie of the mid-70s.  You can see a portion of his leg in the above photo.  You can also see another friend of ours attempting his amazing B-Boy moves in a basement.

I care a lot about both of those two and pray that God will do his thing in their lives every time I think of them.  My friend & I both care a lot about the second guy in that photo.  He is in a lot of pain.  While it is true that our friend has awesome hair and a freakishly perfect butt (I think he models it for manufacturers of earth globes.), he also has issues with Jesus, is lonely, and engages in things that I know only hurt him more.

The odd thing is that I can see the hand of God on both of them.

The older I get the easier it is for me to read people.  I hardly think that one needs to be Sigmund Freud or Sherlock Holmes to do that.  It is simply that I have seen these movies before.  I know how they go.  "There is nothing new under the sun."  It's a skill that develops over time, like a mother being able to know what her child is thinking.


I can read my friends.

Maybe there have been times in your life where you have known a person who went to church with you.  Maybe they went to every bible study, church camp, youth event, etc.  Yet, you got a vibe off of them that gave you pause.  A few years later they walk away from Jesus and tell him to get screwed...or worse.  And you think to yourself; "Ya know, I always wondered if they were actually ever a Believer?"

Maybe there have been times in your life where you knew someone who was not a Christian, but you got a different vibe off of them.  They were very happy sinners.  They reveled in all sorts of stuff that just breaks God's heart.  And they did it with gusto.  A few years later they walk up and tell you that they have repented and now follow Jesus.  And you think to yourself; "Ya know, I always wondered if God wasn't doing something in their life even in the midst of their evil?"

Maybe there have been times in your own life where you, yourself, have walked away from God.  You knew the truth in your heart, but for whatever reason you walked away.  You engaged in all sorts of stuff that you never should have, and it really felt great at the time.  But maybe years later you feel that emptiness that now exists, and then you recall the lover of your soul, your first love.  And you think to yourself...


I do not understand how God works.  It is probably for the best that I do not.  I hate having a really good surprise spoiled.  I do know that he is faithful.  He finishes what he starts.  When you are in his hands, he does not let you go.

I am amazed at his patients.  Unless you are really big into the Calvinist version of Predestination it would appear that God is rarely pushy.  Sometimes he IS! (I.e. Paul on his way to Damascus.  That'll wake you up better than a cup of coffee.) But most of the time it is as if he is just standing there tapping his toe, waiting for you to pull your head out.  But he IS there, and I'm always puzzled as to what he is doing exactly. (He's always up to something.)


But how does one get into God's hands in the first place?  Does he pick you, or do you pick him...or is it a combo?  I really don't know.


The foul & vile heretic known as Rob Bell says that when the question is "Free-Will vs. Predestination," the answer is simply "Yep!"  The tall & not-yet-branded-a-heretic by the "Discermentalists," Chip Ingram (Shout out to my buddy, Ben Currin.), says that it is both...and that since the Apostle Paul didn't have a problem with that apparent contradiction, neither should we. (I don't think that Jesus loses much sleep over it either.)

Like I said, I don't really know how God does what he does, and I'm perfectly fine embracing my finitude on this subject.  I do know that God is faithful and that he will not let you go.

My friend in Afghanistan is becoming more and more curious about Jesus.  I believe that Jesus must reveal himself to him in some interesting fashions to seal the deal.  I have faith that he will do exactly that.  I believe that there may be pain involved in some form or other, but that this will be to the good and to his glory.  I believe that it is only a matter of time before my friend's heart is in Jesus' hands, and then he will never let go.


Perhaps it is already there and neither of us realize it yet.

I do not understand how God works...but I like surprises.


Our mutual friend who despises God, wants nothing to do with Jesus.  "Jesus doesn't pay my bills!"  Well yes, yes he does.  But we are often far to selfish & sinful to recognize the provision of God.  But we will all recognize it someday.

I believe that Jesus will reveal himself to our mutual friend.  In this case, I know that pain will be involved...because it is already present.  But this will be to the good and to his glory.  I believe it is only a matter of time before our mutual friend's heart is in Jesus' hands, and then he will never let go.


Perhaps it is already there and the only one who realizes it is God.

I do not understand how God works.


"I am with you where ever you go.  I will never leave you or forsake you.  I am with you always, even to the end of the age."  These are all themes throughout the bible.  God speaks these things to his people over & over in one form or another.  God is faithful because he is.

Another of the themes in the bible is how UN-faithful we are.  God's people blow it over & over.  I can't go more than a few minutes without some sinful thought creeping in.  "I am a whore, I do confess.  I put you on like a wedding dress.  And I run down the aisle to you," wrote the song writer Derek Webb.  And this is true, we are unfaithful.  But God is very faithful.  He never lets us go.

I have rebelled from pain caused me by those who called themselves "Christians."  I use that as my handy excuse to do things that breaks God's heart.  I do not need that as my excuse.  I will sin anyway. I am very good at it.  I am not very faithful.  But I am thankful that God never lets go of me.

My friends will come to place their hearts in Jesus' hands.  I cannot give a satisfactory answer as to how I know this, but I do.  I know this of some others, too.  I hate to say this, but I am fairly certain that I know of some who never will.  Thankfully, most of the time I don't "know" much at all in this area, nor can I ever say that anyone is beyond redemption and the power of God.  I am very thankful for that.


I do not understand how God works.  I am quite happy with that mystery.  Please do not try to give me a thorough theological explanation as to the intricate details.  It would be the intellectual equivalent of making sausage.  Also, despite your potential PhD, you are not as clever as you think...plus you would spoil the surprise for me.


I take my rest in the following thoughts:
God is faithful because he IS.
Also, when Jesus has you he will never let you go.


After I spoke with my friend this morning, I drove over to pick up my sister for lunch.  I had told my friend that our discussion had sparked a blog post...and this would be it.  In the car I turned on the radio and heard this song immediately.  Some seem to think that YHWH does not have a sense of humor.  I would counter and say that it is they who do not have the sense of humor.


Talk about a perfect ending, especially since it is a "Soul" song.

I seriously need to talk to the folks at Living Waters to get that put into our worship service.

P.S. Does this mean that if I ever write my book, I will have to include Jesus as the co-author for giving me such awesome songs to illustrate my points?
Posted by Joe at 10:57 PM