The Grace of Eli & The Thief 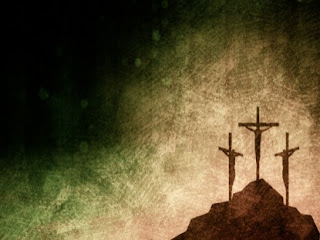 YHWH said to Samuel, "Listen carefully. I'm getting ready to do something in Israel that is going to shake everyone up & down and get their attention. The time has come for me to bring down on Eli's family everything I warned him of, every last word of it"...
..Samuel stayed in bed until morning, then rose early and went about his duties, opening the doors to the sanctuary, but he dreaded having to tell the vision it Eli. But then Eli summoned Samuel: "Samuel, my son!" Samuel came running; "Yes? What can I do for you?"
"What did he say? Tell it to me, all of it. Don't suppress or soften one word, as YHWH is your judge! I want it all, word for word as he said it to you." So Samuel told him, word for word. He held nothing back.
Eli said, "He is God. Let him do what ever he thinks is best."
1 Sam. 3:11-18 (Message Bible version)
The soldiers also came up and poked fun at him, making a game of it. They toasted him with sour wine: "So you're the King of the Jews! Save yourself!" Printed over him was a sign: THIS IS THE KING OF THE JEWS.
One of the criminals hanging along side cursed him: "Some Messiah you are! Save yourself! Save us!" But the other one made him shut up: "Have you no fear of God? You're getting the same as him. We deserve this, but not him -- he did nothing to deserve this." Then he said, "Jesus, remember me when you enter your kingdom."
Jesus said, "Don't worry, I will. Today you will join me in paradise."
Luke 23:36-43 (Message Bible version)

This past Tuesday at our men's group we were going through chapter 10 of The Story, on the rise of Samuel and King Saul. Samuel was an interesting guy. He began serving YHWH when he was still a toddler. For all intents & purposes, Eli the Priest was his surrogate father. It's probably a good thing that YHWH revealed himself to Sam as a young kid. Eli was not a good father.
Eli had been serving the Lord for ages. He knew who YHWH was. But it seems he did not impart that to his kids, Hophni & Phinehas. Apparently he tried to intervene and warm them not to be corrupt bums. Apparently they did not listen. Hophni & Phinenas were not just corrupt bums, they were stupid, corrupt bums.
When YHWH was finally fed up with Eli's family, he told Sam what he was going to do. Sam had to tell Eli the extremely bad news. I thought Eli's response was honest and brilliant! Eli's response was acknowledgment and acceptance. There are consequences to the life you live. Eli accepted this. Eli knew who YHWH was.
There is grace in that acceptance.
Where as Eli had a relationship with God all his life, the thief next to Jesus apparently did not. If he had, he probably would not have been living a life of crime that resulted in execution. Where as the first thief made fun of Jesus, the second thief accepted his fate and acknowledged who he was and who Jesus was. It would appear that the second thief had a relationship with God for only a few minutes. Still, he acknowledged his situation. He accepted his fate.
There is grace in that acceptance.
____________________
I have issues with God. God has numerous issues with me. I do not think that God can love me. I do not deserve love. I am a sinner. At one point or another, I have had multiple opportunities to commit multiple sins. I'm really good at it.
Not that I have been able to accomplish every sin I've wished to, but I have certainly thought about most of them. It is good that most of these wishes stay only in my head. I would be a murderer of the highest order. The lust that lurks in the corners of my mind make me an adulterous whore. My greed would put me in a cell with Bernie Madoff. My lack of compassion makes me appear as a Vulcan. My selfishness would cause Galileo to recalculate so that the universe revolved around me.
I am a sinner. I'm really good at it. I do not deserve love.
___________________
I have heard people call jewish folks "Christ-Killers." I have heard people blame the Jews for this. They say that the Jews killed Jesus. They are wrong.
I killed Jesus.
We have a problem with both of the above. Jesus claimed to be God. If that is true, then how do you kill God? Do you hit him with a bat? Do you stick him with a wooden stake? Do you slip salmonella in his lunch? How do you kill God?
I suppose you can't, really, unless...
In the Gospel of John, chapter 10, Jesus said that no one could take his life. (See, I told you couldn't kill God.) Instead, Jesus said that he was giving up his life voluntarily.
Crucifixion was a nasty death. Romans were really good at two things; building roads and finding ways to kill people painfully & slowly. You hang there, naked, and slowly suffocate to death.
If that wasn't bad enough, 2 Corinthians 5:21 says that Jesus actually became sin itself while on that cross. It doesn't say "SinS," plural...it says SIN. "God made him who had no sin to BE SIN."
Why would you volunteer for something like that?
"Let us fix our eyes on Jesus, the author & perfecter of our faith, who for the JOY SET BEFORE HIM ENDURED THE CROSS, SCORNING IT'S SHAME, and sat down at the right hand of the throne of God. Consider him who endured such opposition from sinful men, so that you will not grow weary and lose heart. Hebrews 12:2 & 3
There is JOY in something like that?
I am a sinner. I am really good at it. Jesus became all of my sins on that cross. He took my punishment...and I don't understand why. I am not worth it. God cannot love me.
____________________
I prefer the term "Broken" over sinner. It is a little bit more palatable. There are many people out there who like to tell you how much God hates you because you sin. There are many people out there who like to tell and remind you of what a sinner you are. When you get most people to a safe place, they will admit how wicked they can be. They do not need to be told that they are turds in the eyes of the divine.
Still, I am a sinner.
I need to acknowledge that.
I am not just broken.
There are other people who do not admit that they are sinful. They will admit that they are not perfect, "But that's not the same as being sinful." They will equate sin with evil. "I'm not an evil person! Most people are not evil, are they?"
Have you driven on the freeway recently?????
Now ask that question again.
David Brooks wrote a great op-ed piece for the N.Y. Times the other day about the American soldier who went on a rampage in Afghanistan recently. This soldier is responsible for the deaths of innocent people. He may well be responsible for the deaths of American soldiers in revenge killings too.
http://www.nytimes.com/2012/03/20/opinion/brooks-when-the-good-do-bad.html?_r=1

"Any of us would be shocked if someone we knew and admired killed children. But these days it’s especially hard to think through these situations because of the worldview that prevails in our culture.

According to this view, most people are naturally good, because nature is good. The monstrosities of the world are caused by the few people (like Hitler or Idi Amin) who are fundamentally warped and evil.

This worldview gives us an easy conscience, because we don’t have to contemplate the evil in ourselves. But when somebody who seems mostly good does something completely awful, we’re rendered mute or confused.

But of course it happens all the time. That’s because even people who contain reservoirs of compassion and neighborliness also possess a latent potential to commit murder."

I didn't know until I read this article that the most violent age for people was age 2. That kind of explains a lot...in a creepy way.
However long human beings have been on this planet, we have about 5000 years of recorded history. Once you have taken a decent look at that history, it is difficult to argue that we are basically good at heart. Sure, we can do plenty of good things...but take a good look in your heart. You know what is living in there.
BTW: When I take a good look at recorded history, I am often left speechless that most of us have learned to tie our own shoes, let alone walk and chew gum at the same time. Again, have you driven on the roads recently???
We are sinful. We are good at it. We do not deserve love. God cannot love us.
"...For the JOY set before him, endured the cross..."
____________________
It is said that Grace is amazing. This is true. Because grace is not deserved or earned.
If I collect all of my dog's numerous steamy piles and place them on your porch. If I enjoy spinning the tires of my SUV upon your lawn. If I dump my trash and recyclables in your back yard. If I think it's funny to relieve myself in your gas tank so you always think it's full. If I do these things, I should also expect a punch in the mouth...or two...or a dozen. (Not to fret. I haven't done those things in a couple of weeks, at least.)
I do not deserve that you should go out and pay of my mortgage and purchase me a porsche.
If you think what I could potentially do to my neighbors...and my dog leaves plenty of piles, think about the way I treat Jesus, my God.
I am a sinner. I am good at it. I do not deserve love. God cannot love me.
____________________
I do not think that anyone can truly comprehend how amazing grace is until they take a good look in their hearts. Yes, I am broken. I am imperfect. I am also truly evil and sinful. I AM! I cannot deny it. You should not deny it either. If you do, you will never understand how amazing grace truly is.
Accept it. Acknowledge it. Eli and the Thief did.
There is grace in that.
I am a sinner. I am good at it. I do not deserve love. God cannot love me.
But he loves me anyway.
Peace
Joe
Posted by Joe at 6:49 AM