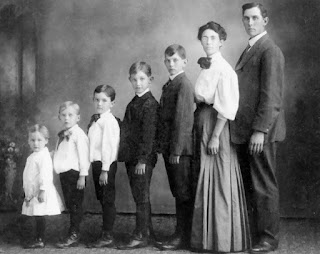 While he was still talking to the crowd, his mother and brothers showed up. They were outside trying to get a message to him. Someone told Jesus, "Your mothers and brothers are out here, wanting to speak with you." Jesus didn't respond directly, but he said, "Who do you think my mother and brothers are?" He then stretched out his hand towards his disciples. "Look closely. These are my mother and brothers. Obedience is thicker than blood. The person who obeys my heavenly Father's will is my brother and sister and mother."
Matt. 12:46-50
"This is my command: Love one another the way I have loved you. This is the best way to love. Put your life on the line for your friends. You are my friends when you do the things I command you. I'm no longer calling you servants because servants don't understand what their master is thinking and planning. No, I've named you friends because I've let you in on everything I've heard from the Father."
John 15:12-15 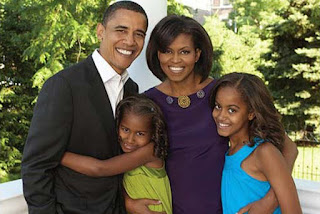 <--- I'm throwing in this particular family portrait for two reasons: #1. Like it or not, Pres. Obama is an outstanding family man. He is the kind of role model that many, many men in our society need, both as a man, husband & father. #2. I know that a picture of Obama will drive many of my friends absolutely nuts. So how can I resist something like that?
On this topic, it's a good thing that Presidents continue to get Secret Service protection after they leave the office. His two daughters are incredibly cute kids, and are most likely going to break numerous hearts of numerous boys. Having men with Uzis around the house will do wonders deterring unsuitable potential dates.
Should make "Break-ups" more interesting, too.
N-E-WAY...
Yesterday I was at the gym doing my thing. I always hit the bike first for about 20 minutes so that I am properly sweaty, stinky and stretched out before I hit the weights. (More on this after the post proper.) I also always listen to various podcasts while doing so. Yesterday, the Imago Dei Community was preaching through Matthew 12. Jesus is kind of dropping the bomb on hard-hearted "Religious" people...as usual. But then his family shows up.
Church history says that Jesus had an odd relationship with his brothers. James, his kid brother seemed to be a particular problem. Turned out OK in the end if you bother to read the book of James. But I can imagine at the time, most of his family had thought that Jesus had lost it. If you were his Mom, you would be concerned too.
So when told that his relatives were outside wanting to chat, Jesus uses that as a metaphor for a much bigger family. He points to his disciples...all men, and says that these guys are his sisters and mom. (Which probably caused a bit of squirming with Peter and Andrew, since both looked awkward in a skirt.) Still, point being that there is more to a family than DNA.
So this Jesus guy, this guy who claims to be God-in-the-flesh, this visible image of the invisible God, makes the statement that anyone who follows him is now his sibling, his kin, his family. Later in the New Testament, the statement is made that as such, all of these family members are Joint-Heirs to everything that belongs to Jesus. Pretty freakin' amazing if you stop to actually think about that for more than a moment.
In the Gospel of John, Jesus tells his followers that they are now his friends, his buds, his BFFs. I can handle that a little easier than I can the idea of actually being his brother for some reason. Perhaps that's just me and my normal insecurities doing their thing. Either way, still freakin' amazing.
I don't think that I, or most Believers dwell and meditate on that truth enough. A friend of God? A mother, brother, sister to Jesus? Truly hard to contemplate. It sounds too intimate. Maybe that's the point. I like it that it should make me feel uncomfortable.
Forgive the blasphemy, but perhaps from now on I should begin my prayers with "S'up Bro?!?!"
It's just a thought.
Peace
Joe
P.S. As an added bonus, I now offer you some gym advice and tunes for your work-out. Please take these next two songs and put them on repeat. (I use these two for free-weight curls.) Use a 10lb barbell, which isn't very heavy, and simply do sets of ten on each arm until the songs are finished. Seriously, you gotta try this sometime. It only hurts a little because the feeling in your fingers go numb after a while.
For this one, set the repeat for two times...
For this next one, set the repeat for three times...
(It's also extremely important that you get these funky-sweet dance moves down, too. You never can tell when they might come in handy.)
Seriously, try curling through either song for the required period of time. You might feel like not lifting anything heavier than a sock for a few hours afterwards, but it's worth it.
:) :) :) :) :)
Posted by Joe at 6:56 AM