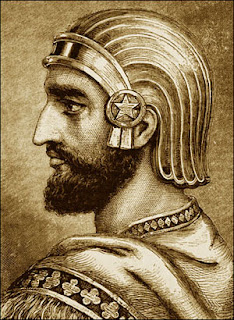 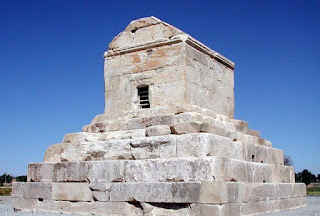 <--- The tomb is still there in modern Iran. Someday I would like to visit it.
Upon the tomb are written these words; "Oh man, who ever you are, from where ever you have come, for I know you will come, I am Cyrus who founded the empire of the Persians. Do not begrudge me this little earth that covers my body." (Personally, I think the wording of that implies a bit of a joke on the part of Cyrus.)
I am of the opinion that in his lifetime, Cyrus had his heart filled. He understood his circumstances. Despite all that he had, he was still searching for more. His conclusion was that he was not worthy by his power, wealth, fame and so on, so he offered the only thing he could... his broken & contrite heart, in faith to a God that he barely understood. I believe that the evidence shows that YHWH honored that offering. This Gentile infidel found the God of the universe and was finally filled. And both were very, very happy to embrace.
Someday I will meet Cyrus and will want to hear his story. If Ezekiel is correct that there will be fishing in the new heaven & earth (Ez. 47:6-12), then I will borrow a boat from YHWH and take Cyrus out for Walleye. I love good stories, so I will hopefully be there for a long, long time...and maybe even write about it. I will listen to his stories for as long as he wants to talk, because in one way or the other, it is about the Good News of the Gospel...so it is glorious.
I will also see if I can trade one of my ball caps for his bronze helmet. It will be glorious.
Peace
Joe
Posted by Joe at 6:09 AM

Email ThisBlogThis!Share to TwitterShare to FacebookShare to Pinterest
Labels: Cyrus the Great, Messiah, Persia, Position of the heart, the Gospel, YHWH