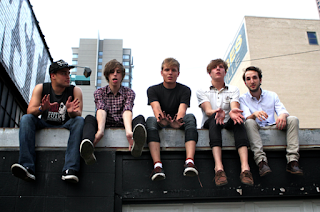 "Get me out of here!"
Jordan Gatesmith, to Augsburg College Admissions.
I figured that since my last post was fairly touchy and serious, I should do the reverse for this one. So I figured that I would turn any readers of this blog onto my new favorite band. (Sorry, but probably not all that many observations on the religious scene in this one, folks.)
I say favorite for a couple of reasons. For starters I am extremely biased towards the music in my State, Minnesota. Minnesota has produced the likes of Bob Dylan, Husker Du, The Replacements, The Time, Prince, The Jayhawks, Atmosphere, Brother Ali...and such towering giants as The Trashmen and Whoopee John. (Who doesn't dig a little polka now & then?)
I used to go to a lot of concerts. (Never as many as I would have liked to, but...) I've been to a fair share at legendary 1st Avenue (Which Prince made even more famous in Purple Rain.), and a couple at it's red-headed step child of a venue, the Seventh Street Entry. One of my favorite musical memories was seeing Paul Simon at the Target Center and then running across the street to see the Trash Can Sinatras at the Entry. I also have a memory of two drunk chicks getting into a really nasty cat-fight right in front of me while I was attempting to watch Cheap Trick at 1st Avenue. (Ah yes, found memories indeed.)
BTW: If you read this and have your own good story from some mayhem & insanity you saw at a show, do me a favor and tell me about it in the blog response area. I love a good story. Just keep in PG rated.
My favorite place to watch a show at 1st Ave. was leaning on the stairs that led up to the second level on the left side of the main floor. If you ever remember seeing a man with his arms folded, staring keenly and straight ahead at the stage, with no interest what so ever in the happenings of everyone else around him, that would have been me.
I haven't been there in ages. Something tells me that if I did go at some future point, young people would come up to ask me if I was there to pick up my grandkids, loan them some money...or even possibly buy them beer. Either that, or they would inform the bouncers that some homeless guy was lost and wandering around the venue. (Neither sounds particularly appealing at this point.)
In fact, I rarely go to concerts anymore due to the obscene price of tickets, and the even more obscene molesting you receive from the likes of Ticket Master and it's ludicrously named "Convenient Charges." If you have never had the joy of experiencing a convenient charge before, simply imagine going to the proctologist for an exam and discovering that his new favorite utensil was a large, metallic mellon with spikes...that had been left in the icebox over night. So, no, I do not go to many concerts anymore.
Never the less, I still loves me some tunes!
So there is a rather new band on the local scene. It would also appear that they hit the lottery. http://www.howlerband.com/ The name of the band is Howler, and to my limited knowledge, they have barely been around for a year. 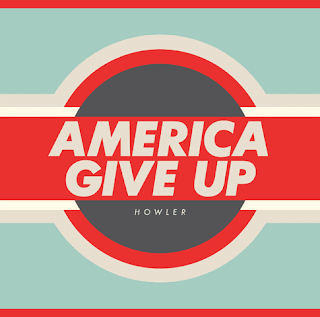 <--- You have to admit, that is a great title for a CD. And it was released less than two weeks ago.
I think it was the week of New Years, and I was listening to what is arguably the best radio station in the country, 89.3 The Current. They had on a bunch of the local critics from the music scene discussing, what else, music. They all seemed to concur that Minnesota music appeared to be undergoing a new golden age.
I have no opinion on that other than that I think it's great if true. For a State of only 5 million folks, and only one large metro area, we certainly pump out some cool stuff. It would be great to see us get more national attention. (See, I'm biased.)
They kept bringing up this band that hit it big over the summer called Howler. So I start googling around and found a couple of videos. I thought these songs were great. When the CD came out I bought it on Itunes. Now the songs are stuck in my head like a painful, yet beautiful & harmonious, sliver.
And this would be the very first song I heard/saw...
You just have to love a song that has the opening lines of; "I wouldn't have it any other way. You're bodies fine, but your mind is not OK."
This next one would be the second song I heard/saw. And before you listen to it, I want you to picture a 70 year old woman in a passenger seat yodeling along to the open sounds of the chorus. (Come on, close your eyes and picture an old bat doing this.) That would be my mother yesterday in my car as we drove home from lunch.
There is just something about a Beach Boy's style croon to a driving beat, with a shot of the Grain Belt Beer sign over the Hennepin Ave. bridge that I must be a sucker for.
Anyway, the main guy behind this group is a college kid named Jordan Gatesmith. (One of the local critics referred to him as "Cute." But if you are 19/20, well...you decide. I DO wish I had his hair,. though) He's been popping around on the scene through High School. He wrote some tunes and picked a bunch of other guys from the scene to help him out. I'm not exactly sure how, but I guess they started to go viral over in the U.K. this past summer. Rough Trade Records liked what they heard. The next thing you know, they have a 4 CD contract.
So this morning I stumbled across a video interview that he must have done VERY recently. I think it's from Holland. I like the interview, but not for obvious reasons. It's not the flashiest...which is good to me. Jordan seems very self-effacing, which is also good in an upcoming star. He also comes off as extremely optimistic and a bit naive...which I actually like.
When you are only 19 and the world of popular music has opened it's doors and given you a big bear hug, you should come off as a little overwhelmed. At the same time, I am hoping that none of this goes to any of their heads...nor any of the other excesses that can come straight at a group of guys that age. (My Dad's inoculation and/or cure for this would be copious amounts of snow shoveling and cleaning all the fish in the live well. That will keep you sweaty, smelly and grounded!)
A word of warning. Jordan likes to cuss...quite a bit. Just so ya know.
Does that kid have any idea how big an ocean he is now swimming in? Probably not. But wouldn't you just love to take his place for a week or two? I would.
_______________________
See, nothing all that thought provoking or deep in this post. I don't have to offer my sage advice or perfectly grounded, unbiased & wise observations on the heavy stuff all the time, do I? I just love music, and this stuff is pretty darn good.
Peace
Joe
P.S. As an added bonus, I shall include alternative versions that the boys did in the Current's studios recently. For more on this station that has obviously been blessed by the very hand of the Almighty, simply click on the following link. (Ooooh, I DID get a religious reference in.) http://minnesota.publicradio.org/radio/services/the_current/
Once again, I give you Howler...
Once again, picture a 70 year yodeling along...
Jeeeeeez, those guys still have acne! I feel very old indeed.
Posted by Joe at 12:04 PM