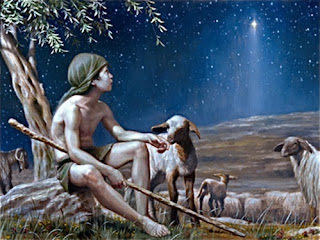 "There were sheepherders camping in the neighborhood. They had set night watches over their sheep. Suddenly, God's angel stood among them and God's glory blazed around them. They were terrified. The Angel said, "Don't be afraid. I'm here to announce a great and joyful event that is meant for everybody, worldwide: A Savior has just been born in David's town, a Savior who is Messiah & Master. This is what you're to look for; a baby wrapped in a blanket and lying in a feed trough."
At once the angel was joined by a huge angelic choir singing God's praises:
Glory to God in the heavenly heights,
Peace to all men and women on earth who please him.
As the angel choir withdrew into heaven, the sheepherders talked it over. "Let's get over to Bethlehem as fast as we can and see for ourselves what God has revealed to us." They left, running, and found Mary and Joseph, and the baby lying in a feed trough. Seeing was believing. They told everyone they met what the angels had said about this child. All who heard the sheepherders were impressed.
Mary kept all of these things to herself, holding them dear, deep within herself. The sheepherders returned and let loose, glorifying and praising God for everything they had heard and seen. It turned out exactly the way they had been told."
Luke 2:8-20 (The Message Bible)
I've lived in Israel. I've seen my share of shepherds with sheep, goats and even camels. The Bedouin, who are generally the folks that tend these flocks, tend NOT to look so much like a ripped teenager from an A&F Kids store, as the above picture would allude to. Nor do they tend to sit around the Judean hillsides at night shirtless, no shoes, and only in a towel. (That desert wilderness gets COLD at night!) 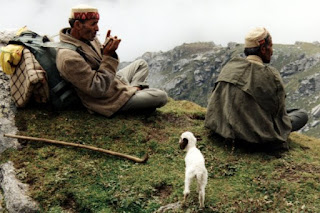 <---- Sorry to pop any bubbles you might have about any romantic notions of those shepherds, but odds are that they looked a bit more like these guys.
Sheepherders were not thought of with any particular esteem back in the day. It was not considered the noblest of professions. In many respects, they were the cowboys of their day...except with a lot less bathing involved.
There is also the particular oil that sheep secrete that can apparently have a less-than pleasant aroma. (My Grandfather, who had some on his farm as a boy, refused to eat lamb ever again because of the smell.) Combine that with sleeping in the open, around copious amounts of sheep dung, and you might get the idea that townspeople would know when those guys were in town...even in the dark.
It's tough to be a shepherd.
Yet, look who gets an a-capella chorus from divine messengers.
It must have been very strange for the townsfolk of Bethlehem to hear these smelly cowboys running around, swearing up & down that they had just had an encounter with God AND that this baby they had found was the Messiah that had been promised centuries ago. I would have had a hard time believing it. I mean, seriously, wouldn't God have done better to have made this type of announcement to the entire Sanhedrin or some type of proper and established religious/political authority?
Apparently not.
But then again, why in the world did God choose an unwed teenage girl to be his birth vessel? Why did he reveal through some astrological sign to a bunch of pagan scholars outside the empire that a Jewish king had been born when they already had a king...even if he was a puppet of the Romans? (Jeez, it took those guys almost two years to get to the party.) Why did God choose to make his first appearance in the flesh in a feed trough in some type of barn structure with all of the nasty smells and "Things" to step in all over the place?
It just doesn't make sense. Not to me, anyway. 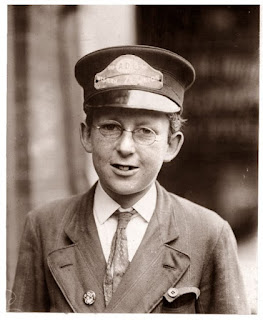 That having been said, try putting yourself in the Angel's perspective. I'm no expert on angels by any stretch. I do know that generally when they show up on the scene, they tend to take a Male form for some reason. However, nowhere are they seen with either wings, halos or perfect blond hair.
The word "Angel" simply means "Messenger." With that in mind, perhaps they resembled the ancient world's equivalent of the Wester Union delivery boy...with the power to destroy entire cities when authorized. I dunno.
From what I do know about angels, they know God in ways that we never will. Yet, at the same time, we will know God in ways that angels never will either. In fact, according to 1 Cor. 6:3, humans will stand in judgment of angels. (The demonic ones, I'm guessing.) To me, what is most interesting about angels is that the bible hints that they have a healthy sense of jealousy & curiosity about the relational potential that every human has with God. (1 Peter 1:12)
So imagine yourself an angel during this particular "Christmas" scene. First off, you have to go through the usual calming period once you make an appearance. Every time you show up the humans freak out. THEN, you have to wrap your head around the idea that you were just standing in front of God in heaven, and now you are witnessing him in the form on a 8lb. wet human prune, swaddled and placed on a mound of hay that the donkeys desperately want to eat. I may be reading into the text things that are not there, but my take is that angels don't have the type of free-will that we do, and thus do not have the same type of understanding that we do. Their perspective on the way God and humanity relate must be rather odd I would think.
SO...
Angel Bob: "Why's the boss all tied up like that in those strips? His face looks all shiny, but not from the halo."
Angel Scott: "I think that is from the sweat and after-whatever that humans get when they pop out."
Angel Shawn: "They haven't invented diapers yet. I've seen this before when I was keeping an eye on little Moses. They call it Swaddle, but it's really just old clothing that gets snagged on door posts."
Baby God: "Waa, waa...WAAAAAAAAAAAAH!"
Angel Bob: "HEY, what happened to the boss's voice? He doesn't sound like James Earl Jones!!!"
Angel Shawn: "That's human talk for "Feed me NOW!" Boss is working on his Yiddish accent."
Angel Scott: "Bob, I know they can't see us or sense our presence, but a goat just walked through your legs."
Angel Bob: "I thought I felt something tickle."
Angel Shawn: "Well, don't step backwards because the cow left something on the floor...and I don't think it will tickle."
Angel Bob: "Eeew! Boss just made a mess in the swaddle."
Angel Scott: "Fffeeee-Uuu! I can smell the shepherds coming. Let's get back to heaven and short-sheet one the Seraphs beds."
It could have happened...
Anyway, shepherds...shepherds, an unwed teenage girl, pagan astrologers. Poor people, nobodies, smelly people...people on the margins. In other words, people that most people choose not to think much about, or look away from when they encounter them. And it is to those very people that heaven pours out it's glory in the form of music, and the kingdom of heaven comes crashing into...and the sustainer of everything takes the form of a helpless baby knowing full well what his fate will be when he becomes a grown man.
It makes no sense. No sense. And maybe that's the point.
Happy Christmas
Joe
P.S. Many biblical scholars note that it was the area around Bethlehem that the sheep to be sacrificed in the temple were grazed. The odds are decent that these shepherds may have been tending these flocks because they would have been substantial in number. If so, do not miss the subtle and beautiful irony that they were witnesses to the lamb would would later be sacrificed to take away the sins of the world and grant freedom to all who would repent and follow.
Posted by Joe at 2:27 PM