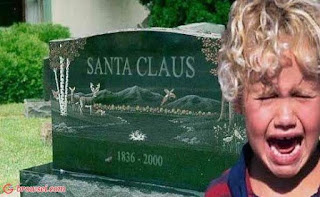 "The Word became flesh and made his dwelling among us...and verily didst he bite the naughty children upon their heads, kidnaping them if wouldst they were beyond incorrigible, or mayhaps leavist them lumps of coal." Hesitations 1:14
I love Christmas. I really do! Although this post might give you the impression that I am a cynical Scrooge to a certain extent. I'm not...really. I know all about the pagan background of Christmas. It doesn't bother me at all. In fact, I find it fascinating how different countries and cultures do up Christmas in their own unique ways.
In my own family, which is racially diverse, we bring both Norwegian AND Swedish culture to the table. (A lot of ethnic tension there, I can assure you.) The lefse, lutefisk, meatballs, lingonberries and krumake gets pounded down with zest and vigor. (Krumkake sounds dirty, doesn't it?)
N-E-WAY... 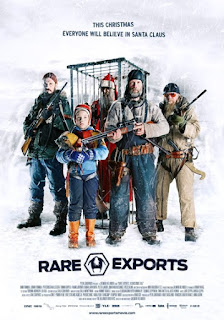 This particular post is nothing more than an excuse to get you to watch a video I came across this morning. Yesterday I heard a story on NPR about a movie titled "Rare Exports."
It's a Christmas movie, but not exactly the kind that you would have your kids all gather around with a big bowl of popcorn to watch.
The premise is that way up just below the arctic circle, a group of miners discover the burial mound of the original Santa Claus. I wont spoil it for you. But suffice it to say that the original Santa, according to Nordic legend, wasn't all that interested in giving gifts. Also, as far as naughty people were concerned, well...you better watch out.
If you wish to read the original story from NPR, simply click this link. http://www.npr.org/blogs/monkeysee/2011/12/20/144024799/dvd-picks-rare-exports-a-christmas-tale
So I looked it up this morning and found out that it was based on a short film from Finland back in 2003. I watched it, and found myself laughing hysterically about half-way through. There is nothing like the sight of a "Wild" Santa being trained to NOT bite children that just makes me roll. Have a look, won't you?
Advisory: Wild Santas, living in their natural habitat, do not wear cloths!!! So be aware.
Now tell me that you didn't find that funny.
Like I said, I love Christmas. I know that the early church chose the date to counteract the pagan religions around them. I know that the Christmas tree was chosen because it was triangular, which symbolized the Trinity. Also, because it was an Evergreen, which symbolized eternal life. The early church did a lot to missionize the cultures around them by co-opting the symbols of those very cultures. I think that's a good thing. Unfortunately, now days the church is the one being co-opted by our own culture. (Just look at Rick Perry.)
I like to give gifts. I'm good at wrapping, too. My Dad says I can make a dead fish look good the way I wrap a box. Which is true as he'll find out when he opens his presents from me on Christmas Eve. I also tend to be done with any purchases before Thanksgiving. This allows me to go to the mall and enjoy the angst, stress and misery of everyone else around me. Like I said, I love Christmas.
My main complaint about Christmas actually IS the date. December 25th is rather early in the beastly season of a Minnesota Winter. After that we have nothing to look forward to until mid-March when the thaw may or may not happen. This year has been a bit of drought thus far. Last season we had a blizzard every week. (Seriously, we did.) I have every confidence that the weather will seek it's revenge later this season and even into Spring. So, it might be easier to handle if Christmas was celebrated in late January or early February.
Christmas, I love it! I was in Cairo for a Christmas break when I lived in Jerusalem. Cheeseburgers are illegal in Jerusalem due to Kosher laws, ("Oy va VOY!") so we headed to Egypt to find one. The hotel we stayed at had Christmas trees and Santas all over the place. (Which is something considering it is illegal to convert to Christianity in Egypt.) In Jerusalem, Christmas is celebrated with the beating of the Palestinians by Israeli troops. In Bethlehem, it is celebrated by the annual fist fights that Catholic and Orthodox priests get into over who will sweep the manger floor.

Christmas celebrations and traditions are fascinating and awesome to me. In China, they imprison dissidents. (Actually, they tend to do that year round.) In the Scandinavian countries, a hot blond chick will essentially light her head on fire and douse in out in a barrel of whitefish soaked in lye. (Which is how you make traditional Lutefisk.) In the Czech Republic, Dad will go to the market for a live Carp, keep it in the tub until Christmas day, then whack it on the head and smoke it. (Seriously, they do that.)
In Canada, they play hockey, drink Molson Ale, and put Mayonnaise on the tree. In Ethiopia & Eritrea, they drink Christmas coffee and have a delicious meal of roasted sand. In England, Father Christmas leaves a Yul Log in your fireplace. (Seriously, the Brits desperately need to find a better area to place a toilet.) In Iran and Saudi Arabia, they don't "Do" Christmas, but they will beat or stone you for being a woman.
Here in America, we have numerous traditions. Generally, we just tend to go deep into debt in hopes that it will revive our flagging economy. However, there are regional differences. For example, in the mighty metropolis on Minneapolis & St. Paul, we all run down to the Mississippi River and pee in it as it flows to Iowa. (It's our favorite gift to give.) In California, they give Kardashians to men for the weekend. (A LOT of re-gifting in that area.) In both Mississippi & Alabama, cousins and other close relatives will "Make Out" under the mistletoe. Florida gets boat loads of Cubans and Haitians as gifts. Texas and Arizona employs and then incarcerates Mexicans. Finally, in Utah, each husband gets an extra wife.
Not to be outdone, political parties have their own traditions. The Democrats hold a very disorganized "Holiday/Festivus/Non-Offensive, Neutral-Name" party, in which nothing meaningful gets accomplished. Republicans give tax cuts as gifts to the wealthy so as not to encourage class warfare and stimulate the creation of incredibly crappy jobs on the bottom rung of society. Members of the Green Party give each other fruit (Emphasis on "Fruit.") cakes made from %100 organic and "Fair Trade" flour. Finally, Libertarians don't give gifts at all. They expect you to pull yourself up by your own boot straps and buy your own.
As I understand it, Jews celebrate Christmas buy going to the movies after the traditional meal of Chinese.
So, however you do Christmas, I hope yours is fantastic. Don't mind the pagan stuff or the campiness, just have fun.
Also, be happy you didn't grow up in the Netherlands. (Give it a listen, it's awesome.)
Peace
Joe
Posted by Joe at 7:35 AM