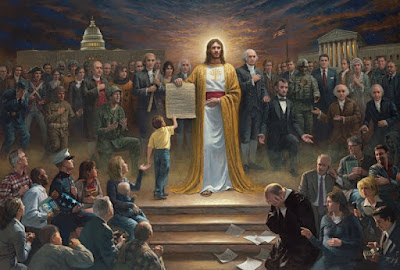 "I am YHWH your God, who brought you up out of Egypt, out of the land of slavery. You shall have no other gods before me." Dt. 5:6 & 7
"Jesus said, My kingdom is not of this world. If it were, my servants would fight to prevent my arrest by the Jews. But now my kingdom is from another place." John 18:36
If you have the desire to empty the contents of your stomach due to too much turkey on this Thanksgiving weekend, just take a closer look at that picture. It certainly makes me want to vomit every time I look at it. If simply looking at the picture isn't enough, click on this link to the painter's website and listen to his explanation of this garbage.
http://buyonenationundergod.com/Default.asp?bhcp=1
BTW: This is the first of a two-parter. If you would like to read the second part, which has considerably less venom and A LOT more humor...http://trippingstumblingwhilefollowingjesus.blogspot.com/2011/11/neo-pagan-america-part-2.html
I can be flippant and say that I had no idea that Jesus was instrumental in writing our Constitution. This would mean that Jesus thought black people were only 3/5th of a human being, Senators should be elected by State legislatures and that women did not have the right to vote...at least until Jesus changed his mind many years later. Apparently, at one point Jesus must have joined a very strict Fundamentalist church, because he outlawed liquor for a decade. Later, Jesus recalled the time he turned 180 gallons of water into wine, missed those parties and changed his mind again by ushering in the 21st Amendment.
BTW: What is really and truly awesome about that painting if you do go to the website, is that you can scroll over the entire blasphemous thing and it will give you explanations as to what everything means. If fact, check out the stars in the upper-right corner. "There are 50 of them for each State. Some shine brighter than others." (Must be the Red States that shine the brightest, I'm guessing.)
I found this portrait of neo-pagan, idolatrous garbage last Sunday after waking up to this news story. http://www.npr.org/2011/11/20/142559992/gop-hopefuls-open-up-in-bid-for-christian-vote This was not a good story to listen to the first thing on a Sunday morning. It made me absolutely LIVID with anger. In fact, here is the quote that made me just want to explode. "Ladies and gentlemen, we want to have a movement that transforms this culture to a biblical and constitutional worldview with elected leaders who adhere to the foundations and lead like they know what the foundation of this country is all about," said Family Leader president Bob Vander Plaats."
I don't know what Vander Plaats was smoking when he said this, but that is one of the most paganized, idolatrous statements I have ever heard! How DARE you, how dare ANYONE put ANY document on the same level as Scripture???
For the record: I love this country. I love the Constitution. I think our nation is the most unique country in the world. We were an "Idea" well before we became a nation. We were the first modern country to experiment with representative democracy. We have been, and still are a haven for those oppressed. We are a country richly blessed, and still worth fighting for.
That having been said, we are NOT the kingdom of God. There is no such thing as a "Christian" nation. There are only "Kingdoms of Man," and each and everyone of them will face judgement before God. The founders of this nation never, ever intended for us to be a specifically "Christian" country. Even if they had, it would still not be possible. Such an idea cannot be defended biblically or theologically. When someone makes the claim that this or that nation is "Christian," they are embracing a form of paganism that goes all the way back to Constantine legalizing the church, and then immediately co-opting it for his secular purposes.
For a very, very thorough look at how much of Christianity has been infiltrated with pagan ideas, and specifically what Constantine did when he made the church legal in the Roman Empire, check out this book. http://www.paganchristianity.org/ You don't have to like all of it, but it does tell an interesting story.
I was having coffee with friend yesterday. I told him that many think I am an "Arminian" theologically, simply because I am not a "Calvinist." In the same way, I suppose that I am a Liberal by default, simply due to the fact that I do not subscribe to what passes for being Conservative this month. (Hard to tell. Those definitions seem to change every so often.) Whatever. I told him one thing that I respect about the Democrats, and more specifically Liberals, is that whatever else may be said about them, they don't run around pretending that Jesus is on their side in everything they do.
I absolutely HATE it when people try to tie Jesus to a country, a flag, a political party, or whatever else you might choose. Do NOT do that. It is idolatry. When God is tied, glued, or nailed to some man-made construct, you are committing what I have come to view as Neo-Paganism. You are lowering the Holy One to fit into a man-made box that can then be used to smite thine enemies. 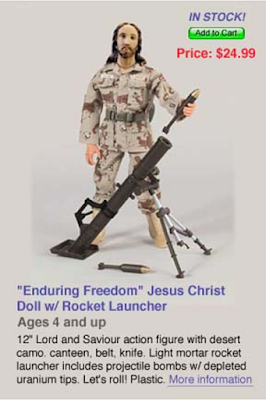 <--- Do we really want the "Lamb who takes away the sins of the world" to look like this?
When you tie Jesus to a nation, no matter how wonderful that nation may be, you are also tying Jesus to every mistake that nation makes. If we were & are a "Christian" nation, then that means that slavery, discrimination, racism, the annihilation of the Indigenous people, and even our speed limit can be tied to Jesus.
Tying Jesus to a nation, ties Jesus to every policy that nation has...especially in matters of foreign policy. If you think I am joking, just take a quick look at how the Islamic world feels about Christianity and our "Christian" nation. Don't Believers in those countries have enough trouble as it is? Why do we make it harder for them by gluing Jesus to our foreign policy?
Now I have a little something that is sure to have plenty to offend pretty much everyone. Back in 1980/81 the prophet, Frank Zappa, wrote a song titled "Dumb all over." Mind you, this was just at the beginnings of the rise of the Religious Right. The Cold War was still front and center. Only Iran had a crazy, Islamic regime...and it was still pretty topsy turvy at that point. Listen to this song, especially about halfway through. This song was written 30 years ago, but it sounds like the exact situation we are finding ourselves in today.
(Awesome bass line, with a great guitar riff at the end...in my own humble opinion.)
I admit the video is a little creepy. But I do think it illustrates the point.
"Our god says, "It's all ok"
Our god says "This is the way"
It says in the book, "Burn and destroy"
And repent and redeem and revenge and deploy
and rumble thee forth to the land of the unbelieving scum on the other side
'Cause they don't go for what's in the book and that makes 'em bad
So verily we must choppeth them up and stompeth them down
Or rent a nice French bomb to poof them out of existence
while leaving their real estate just where we need it
to use again for temples in which to praise our god,
'cause he can really take care of business"
And THAT is exactly what you get when you attach Jesus to a Kingdom of Man. The next thing you know, you are killing in Jesus name. It may indeed be necessary to fight and die for your country from time to time. However, if your god needs you to fight for him in any way shape or form, then I really have to question what god you are serving. The God of the bible that I desire to serve doesn't need my help for ANYTHING.
If you want to reinterpret the God of Scripture to fit your political or national box, then you are nothing but a Neo-Pagan with a bit of Jesus spray painted on yourself. In fact, I would go as far as agree with Frank's final lyrics about you and the god you serve; "Well let's get serious, god knows what he's doin'. He wrote this book here and the book says, "He made us all to be just like him."
So, if we're dumb, then god is dumb...and maybe even a little ugly on the side."
And that is definitely NOT my God.
Peace
Joe
Posted by Joe at 7:24 PM