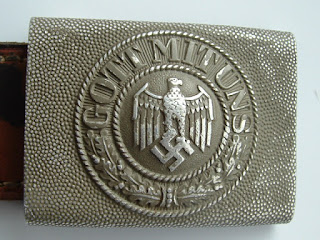 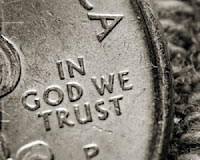 <--- "In God we trust." Really? Since when??? When has America, or ANY other kingdom of man ever truly put it's trust in God? Do we think by stamping that on our money we are somehow more righteous than other countries? We may as well put that on our belt buckles for a good luck charm the next time we go to war. (Teddy Roosevelt wanted to take that off our money because he thought it was blasphemous. I agree with Teddy.)
I don't even like seeing "God Bless America" on bumper stickers. Who are we, who is anyone, to insist that God should bless us? I would much prefer a bumper sticker that said "MAY God PLEASE bless us," OR "America, praise YHWH." It just strikes me as such arrogance and presumption.
Why in the world should the sovereign "Holy One" ever have to be on anyone or any countries' side? If he chooses to for what ever reason, that's his business. But if you ask me if God is on our side versus China for being the strongest country on earth, my answer would be "Neither!"
Unfortunately, there is also plenty of arrogance in the American church, too. 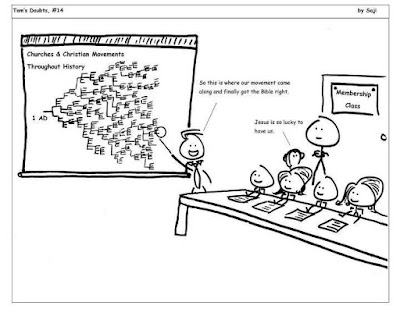 <--- You may have to click on this cartoon to read the small print. The point it's making is that so many "Christians" out there seem to believe that they are the ones who have Jesus all figured out. They are the ones who have the "Correct" theology and "True" biblical interpretation. Jesus is, indeed, lucky to have them. And thankfully, due to their proper understanding of the bible, God is surely on their side in all matters of being. After all, YHWH owes them because they do it right.
I have been told that, at best, I am a second-class christian because I do not speak in tongues, I'm not a Calvinist, I'm not a Catholic, I'm not Lutheran, I'm not whatever. I'm not an Arminian either, but for some reason they don't throw as many rocks as Reformed-types do.
I've grown up Baptist, and still am. I did notice a bit of smugness on my part when I was younger. "Those silly Lutherans & Presbyterians with their Confirmation classes. If they came to MY church, they wouldn't have to do that." Thankfully I've grown out of that.
I am a mortal, finite, sinful man. Who am I to assume that God is on my side at any given moment? Who am I to challenge God? I don't really think he cares all that much if like or don't like what he does and may do. I think that maybe what he hopes is that I will simply trust him that he knows what he is doing. It makes me itchy when I realize that. No one really enjoys not being in control of their situation and circumstances. But in the end, that's reality.
God doesn't have to be on my side. I'm the one who has to be on his side. That's where he wants me to be, and that is where I will be safe. Why should I expect anything else?
So one more time; if you ask me if God is on my side, your side, this countries' side or that countries' side, I'll just say "Neither." So let's call the whole thing off.
Peace
Joe
Posted by Joe at 9:00 PM