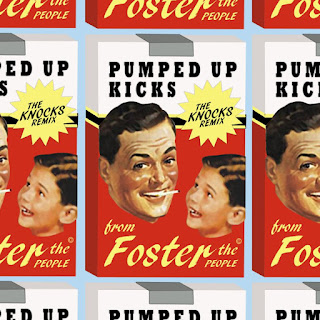 Sorry, there is nothing particularly "Spiritual" and such about this particular post. I'm just having a bit of fun with a band I like. So don't expect anything especially deep or insightful.
I'm rarely all that clever anyway.
So anyway, sometime last Spring I was listening to my favorite "Alternative" station in the Twin Cities. http://minnesota.publicradio.org/radio/services/the_current/ <--- Great station, that.
I hear this song that I had never heard before called "Pumped up Kicks" by some group called Foster the People. (Odds are, you've heard it by now.) I thought it to be a rather catchy tune, and so I looked it up when I got home. Turns out that they had there own homemade video for it, and it goes like this...

I guess it was about a week later that this group was featured in an NPR story, so I got to learn a little more about the group. http://www.npr.org/2011/05/26/136643883/foster-the-people-an-outsider-anthem-a-viral-hit I liked what I heard. Kind of a "Beach Boys meets Techno" sound to the group. The lead singer, Mark Foster, didn't come off as some snotty rock star, either. I also get a kick out of how the band looks. They kind of look like a bunch of "Pretty Boys" straight out of a Hollister store. They just DON'T look like musicians. (Not in the "We-don't-bathe" Seattle grunge mode anyway.)
So I download it from Itunes and take it to school with me. I'm working with a bunch of Kindergartners & 1st Graders. So I decided to have a little dance off one day to the song. (Boys vs. Girls) The kids loved it.
Unfortunately, if you know about the song, you know that despite the perky beat it's actually about an angry middle-schooler or such who pops a bolt. So, in hopes that the kinders would not be unduly damaged by off-kilter lyrics, I decided to change them just a tad. (You kinda have to be paying attention to pick them up anyway.)
I took the line, "All the other kids with the pumped up kicks, you better run, better run. Better out run my bullet." I tweeked it and told the kids that what they were singing was "All the other kids with the pumped up kicks, better run Mamie, run. Out run my bagels." Since Mamie was one of my cute little kinders, she thought that the song was now officially awesome...and all was right with the world.
The boys won the dance contest, by the way.
So anyhoo, I like the song. It sticks in your head, but not in a painful, sliver-like way. This band had been in Minneapolis in March at the 7th Street Entry. That venue fits about 50 people wall to wall. By the time that song cracked the radio...due in large part to that NPR story, the band was back in May at the Fine Line Cafe...which fits about 300 people. I would guess that the next time they are here, they will be playing a venue that sits 1500 or so. Not bad for a band that has only been around for about 2 years now, and only really got attention about 8 months ago.
One of the things that I enjoy about music and bands is how they can...if they are talented anyway, they adapt, evolve & grow. So you start with three guys playing all the stuff, then they adapt to their new circumstances. So you go from that first video to this performance on Saturday Night Live a few months ago...
Kinda cool, don't you think?
Well, what gives me hope that these guys will be around for a while is this next video from one of the concerts that David Letterman has at his venue. From a basic 3 minute song to an 8 minute dance party. Can ya dig? (Mark Foster does a little channeling of Bono, if you ask me.)
Well, like I said, nothing particularly deep about this post. I just thought the changes to the song were interesting. I like to share stuff that I think is cool, interesting and fun, so...
The big bummer for me is that as much as I love music, I can't play a thing. I've tried! I took piano lessons. (Sucked at it) I played the trumpet in Junior High. (Passable, but no Louise Armstrong) I tried to learn guitar. (Curse these bear paw hands of mine) If I try to sing, wild birds peck at me. What's a guy to do?
Good thing I have an Ipod.
Peace
Joe
P.S. What the heck, here's a couple more bits...
Like your songs acoustic? Ta da!
And...

You're never gonna get that song out of your head now, are you?
Posted by Joe at 3:39 AM