Who is my God? 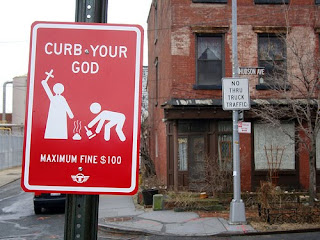 <--- Now that's a funny picture. But it's often what comes to mind when I hear people try to explain God...or at least what THEY think God is.
Caveat: There will be people who will read this and jump to conclusions far more quickly than they should. There will be others who will take everything out of context and get their underwear in a knot. And then there will be those who simply "Cherry Pick" what I say, and reconstruct it to fit their pre-conceived notions. Please don't.
____________________
Who IS my God?
Well, I've been thinking about this question for a long time now. I spent most of this day out at the cabin raking & burning leafs. While staring at the piles of smoking leafs, I found myself looking up at the sky every so often and asking, among other things; "Who ARE you, and who AM I?" I'm afraid that I don't really have a solid answer. At least not in the sense that it would satisfy people with a simply/simplistic answer. In fact, after dwelling on this subject for a long time now, the best I've come up with is who my God is NOT.
I guess I should start with some Scripture verses that I run to when I ask myself this question. So...
"I have seen the burden that God has laid on men. He has made everything beautiful in it's time. He has also set eternity in the hearts of men; yet they cannot fathom what God has done from beginning to end." Ecc. 3:10 & 11
"Trust in the Lord (YHWH) with all your heart and lean not on your own understanding; in all your ways acknowledge him, and he will make your paths straight." Prv. 3:5 & 6
"As the heavens are higher than the earth, so are my ways higher than your ways and my thoughts than your thoughts." Isa. 55:9
____________________
Here is my premise: I believe in the God revealed in the Bible. Specifically, I believe in the God who became flesh, died on a cross for my sins, and then was resurrected. I do believe in that God. However, because I believe in THAT God, I also now conclude that this God is simply too big for me to ever fully grasp and understand. As such, this now leads me to reject much of what God has been turned into...especially by many who call themselves "Christians." To put it another way; I have to reject "god" to follow GOD.
So, this means that I should probably take a shot I who I now believe God is NOT.
____________________
In the "Secular" world:
My God is not the god of America. Actually, considering how many people in this country talk about god, you might conclude that they believe America IS god. http://www.abc.net.au/religion/articles/2011/08/08/2947368.htm <--- Read that article from Australia when you get a chance.
My God is not the god os post-modern relativism, where god can be whatever you want god to be as long as you are nice to people.
My God is not the god of Conservatives or Republicans, who feel that Jesus only cares about tax cuts, a strong military, making sure marriage is only between one man and one woman...unless you get a divorce first, and that every pregnant woman gives birth. (At which point you no longer care about either the woman or baby, because being Pro-Life ends once the child pops out.)
My God is not the god of Liberals or Democrats, who feel that Jesus preached a progressive tax rate, anything goes when it comes to sexual behavior, and that we should all drive a hybrid car.
That was easy. So now lets go elsewhere...
____________________
I'll skip the "Religious" world, because I already stated that I believe in the God of the Bible, which means I do believe that Jesus IS God.
However, in the "Christian" world:
My god is not the god of "Liberal" theology, where god is reduced to being squishy, pliable and relative like the rest of post-modernism. (Like play-doh for the soul & intellect.)
My God is not the god of "Fundamentalists," who hide behind castle walls keeping sinners at bay with polyester suits, bad haircuts, worse music and a sense of purity & self-righteousness.

My God is not the god of Todd Friel...whose god is apparently John MacArthur...whose god is a package of Oscar Mayer Balogna, sliced into nice little pre-cut pieces of "Dispensational" theology ready to be set between two slices of WHITE bread. (Remember, Whole Wheat is the first bread on the slippery slope of regularity brought on by whole grains.)
<--- I believe this is the book jacket for MacArthur's next book explaining why everyone, who disagrees with dispensational theology is worse than Rick Warren and the Pope combined. 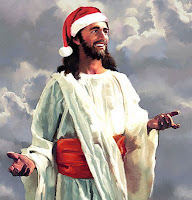 My God is not the god of the "Name it & Claim it" Prosperity screachers like Kenneth Copeland, Benny "The Beast"Hinn, Mac "Daddy" Hammond, or Kenneth Hagin who have turned Jesus into Santachrist, who want your money and blame you for a lack of faith if you don't give it to them. Neither is my God the god of Todd Bentley, who kicks women in the faith when Jesus tells him to.
<--- Actual Christmas photo of Kenneth Hagin, compliments of Rhema Bible School.
My God is not the god of "Calvinists"...not Hyper-Calvinists, anyway. My God is not to be reduced to a divine puppet master with a sadistic & narcissistic personality disorder. (Honestly, I think that if John Calvin came back today and saw what some folks are doing with a very basic theory that he had, he would be pulling his hair out screaming; "What the hell is wrong with you people?!?!?!")
But then neither is my God the god of some "Arminians" who believe that even though you are saved by God's grace and did nothing to earn it, you can somehow snatch that salvation out of God's hands and throw it away.
My God isn't any of the above, because all of those are simply man-made constructs. Some of them were constructed with selfish & foolish intent. Some of them were constructed with sincere hearts in an attempt to understand the God of the bible. However, in the end they all have inherent flaws and ultimately fall short.
____________________
So who is my God?
My favorite answer at this point is simply to use the name he gave to Moses, the name "I AM." That name asks more questions than it answers...but maybe that's the point. If the God of the bible were so easy to understand that we could actually reduce him to a formula in a book, then he wouldn't be much of a god at all.
I much prefer the idea of a God who is not "Safe." (Does being crucified & resurrected, and then asking your followers to be willing to do the same sound "Safe" to you???) A God who is untamed, radical, full of surprises, controversial and unapologetic all at the same time sounds much more appealing to me. And I think that might be who my God really is...
I came across this video a while back and posted it once before. Peter Rollins can drive many people nuts because he talks in parables and rarely gives a black & white answer. However, I think he might be on to something with the main point he is making in this video. (Don't get all hot & sweaty because he uses the term "Divine Atheism" for a big-picture approach to the God of the bible.)

I've heard many people say that to the ancient Hebrew mind, God was never meant to BE understood. THIS God was simply meant to be experienced. Which, in turn, leaves the human mind very, very frustrated...mine anyway.
However, I am coming to understand more and more how true that is. If we really believe that this God who chooses to reveal as much of himself as he wishes to in the recorded Scriptures...and then tells us in no uncertain terms that we will never fully understand him anyway ALSO desires a relationship with individuals, then it really is meant to be an "Experience" and not merely an intellectual comprehension.
____________________
I dunno. I was just standing there watching the piles of leafs I raked slowly burn. I kept looking at the wisps of smoke from those piles, the clouds passing, the sun slowly setting. I kept thinking until I had wisps of smoke coming from my ears too. I did enough talking to God that I'm glad the neighbors were not there to watch me. This was the only conclusion that I could come up with.
Well, that and one other; who ever my God really is...this God I can barely comprehend, I need to learn to lean on him and not on the lump of cheese between my ears. As such, I need to learn to let go and just trust him. (Not an easy task.)
If I can do that, then I can embrace this...
"Much dreaming and many words are meaningless.
Therefore stand in AWE of God." Ecc. 5:7
Peace
Joe
Posted by Joe at 5:31 PM