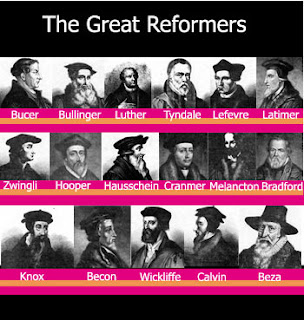 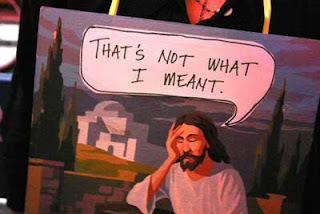 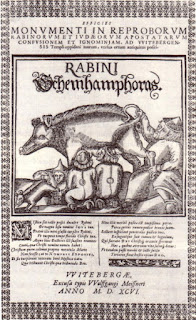 <--- "The Ineffable Name" was the last major bit of writing that Luther did before he died. It was essentially a angry screed against the Jews. He called them the children of the Devil and other pleasant things. He encouraged people to burn down their homes and synagogues. This tract was used by Hitler as one of many justifications for his persecution of Jews. In fact, it has only been translated into English by the American Nazi party.
After reading this thing, Philip Melanchthon, Luther's right-hand man, shook his head and said along the lines; "I can't believe that this came out of the mouth of a man of God."
The only way I can wrap my head around this is to note that in the last years of his life, due to intestinal and other physical problems, Martin Luther seems to have completely lost his marbles. But still...
I read this about Luther, and about the brutality of John Calvin and I really have to scratch my head. They "Said" the right things for the most part, but their public lives were not something to be emulated...and certainly not very Christ-like.
For the record, I never expect perfection out of anyone. We will struggle with sin until the day we die. However, there is a significant difference between a Pastor who struggles with alcoholism, an Elder who struggles with same-sex attraction, a deacon who likes to gamble a wee bit too much...and a church leader calling for his followers to main, burn and kill people in Jesus name.
____________________
I chalk this up to the whole "Discernment of the Holy Spirit" thing, but have you ever just gotten a vibe off of a person in your church that made you think; "Hhmm, I wonder if he/she really is saved?" This person might say all of the right things. They might even be out "Witnessing" and sticking tracts in people's hands. But there is a part of you that is seriously questioning them.
I dunno. I've gotten that vibe off of some others from time to time. I guess it shouldn't come as a surprise that years later I discovered that many had long since left the faith. I'm not totally sure what to make of all of that, but I can't simply discount it either.
____________________
Theology is great. It's how we give an answer for what we believe. It also helps guide us in our walk with Jesus. But at the same time, it ISN'T Jesus..."The author and perfecter of our faith." I see all the time how many pastors & teachers will elevate their theology over Jesus. It always ends up resembling a cult to me.
I think at this point, I would trust much easier a person with a simple, basic faith, than I would a "Learned" person. It seems to me that this simple faith allows the Spirit to do it's work much easier in that person's life.
Jesus didn't speak a great deal about complex theology. He talked about simply having a child-like faith in him. He also said that we would know who his real followers were by the fruit they produced. Paul expanded on this idea when he gave specifics as to what this fruit would look like; "Love, joy, peace, patience, etc." There simply were not complicated confessions to nod your head to.
Furthermore, it would appear that according to Jesus, there would indeed be those who were saved...and yet they did a terrible job at teaching other Believers. (Matt. 5:17-20) These teachers, though saved, would be called "Least" in the new kingdom. The only way I can understand this is to try and look, once again, at whatever fruit they may or may not be producing, and NOT their theological purity.
The truly scary part is that there will be plenty who stand in front of Jesus saying "Lord, Lord," and yet Jesus never knew them at all. Apparently, they never produced an once of that Fruit of the Spirit regardless of how much they knew the bible. (Fred Phelps, you are in big trouble, mister.)
_______________________
It would appear that the Reformation will never be truly over. Theology is a great tool, but that's about it. What every person needs is a reformation of the heart. Simply faith. Simple trust. To crawl up into the Father's lap and offer him a broken & contrite heart. I'm not sure if it gets much more complicated...or more better & beautiful, than that.
I dunno. It's just a thought.
Peace
Joe
Posted by Joe at 12:48 PM