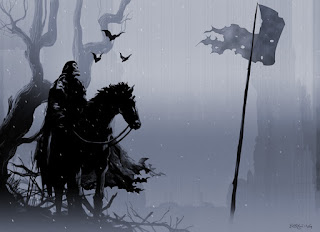 "When the Lamb opened the third seal, I heard the third living creature say, "Come!" I looked, and there before me was a black horse! It's rider was holding a pair of scales in his hand. Then I heard what sounded like a voice among the four living creatures, saying, "A quart of wheat for a days wages, and three quarts of barely for a days wages, and do not damage the oil and the wine."
Rev. 6:5-6

The Message Bible has a slightly different translation on that last part that I think might shed some light on exactly what these verses are getting at. "...but all the oil and wine that you want."

So tonight, as I wait to feel sleepy, I want to give an opinion in the form of a semi-polite rant. Since it's an opinion, and rather late in the evening, I wont bother to look up the various facts & figures, with the links to them. You can look them up yourself if you wish. Most of what I write will be common enough knowledge.


Tracy Chapman - talking about a revolution by ccosterg

(Kind of an angry song. But I can identify with it a little bit)

For the past couple of years now, I've been towards the bottom of the economic food chain. I don't live in poverty by any stretch. However, I now understand, in ways that I could never have before, what it is like to worry constantly about paying every bill...and knowing that you have nothing to spare should some major car repair or house problem occur.

I don't exactly thank God that I am in this situation. But I AM thankful that I have a deeper understanding of what so many, many other people have to deal with on a more permanent basis. THAT, and having had the opportunity to work for half a school year in the poorest neighborhood in the Twin Cities, with the poorest people I have ever known, has been quite an eye-opener.

Let me throw out a fact that no one would dispute:
We have been in the worst recession since the 1930s for years now. Every economist says that it will end when the average person feels secure enough in their job/jobs to go out and spend some extra money. If I, you, they, us all feel like we have some extra cash in our pockets, we will go out to eat more often, buy an extra shirt, and maybe splurge on an extra pair of shoes that we don't really need but just looks really cool when we wear them. This in turn, will spur the economy out of recession and back to a healthy state. Agree??? Good.

The Logic of "Short-sighted Capitalism." (AKA: Idiots!):
I'll make this part personal, because this is based purely on MY experience in one single store...but something tells me that it is the norm.

I've written about this before, so I wont re-hash all of it. Suffice it to say that in an effort to save money, my company...and my Union big-wigs, signed a contract that completely screwed the workers. We gave up getting any raises for 3 years, no extra $1 an hour on Sundays, no over-time, but we now have the joy of being forced to take a 1 week UN-paid vacation. We also went on a semi-permanent hiring freeze. Best of all, our hours are STILL being cut.

I spent the last few times at work being short-handed...tonight too, but still being expected to do the work of twice the people available. I was told by the others in my department to simply stop caring if I want to survive mentally. This bothers me to no end, because I WANT to care. I WANT to do a good job. I generally like most people and WANT to be friendly to customers. But the truth is, I now understand what they were talking about. To get the job even half-way complete, you have to turn off your emotions and simply become a speedy robot.

Not to worry though, because here's the best part: The higher-ups, those who already are doing fairly well and are making these rules, they get rewarded for setting up a system where the most vulnerable are being screwed over. My store alone handed out $85,000 in bonuses this past year to people who cut hours, benefits and wages for those who could least afford it. There is no way in heaven or hell that they actually saved that much money by cutting our hours!!! (I mentioned this some time ago, but each store also spent $120,000 on a new camera system to spy on the employees. I wonder if they got that much by taking away our extra pay on Sundays?)

That all sounds like brilliant way to make sure that the economy is stable, fair and healthy...don't you think? (That was sarcasm, in case you're not bright enough to figure it out.)

It's no secret that the American Middle-Class has been shrinking since the 1970s. The gap between the haves & have-nots grows wider every year. When the economy gets hurt, the people at the bottom feel it the most...and that bottom is getting bigger than one on a Mississippi girl at the local Crispy Cream.

Jump back to that quote from the Book of Revelation.
You see where I am going with this.
We at the bottom work all day for that quart of wheat.
Those a the top get all the oil & wine they want...and more.
(It's OK though, because they are the ones who create the crappy jobs on the bottom.)

Most of the world outside of Western borders is already in a situation like the one described in Rev. 6. A small minority of people control the vast majority of the wealth & power. The rest of the populace has to scrape by. Kinda looks like it's coming our way too...slowly but surely.

I have friends that love to throw out dirty words & phrases like "Class Warfare" and "Redistribution of Wealth," when we talk about inequity in our economy. They say that you can't take from the rich because they earned it fair and square...like Ken Lay, Bernie Madoff and Rush Limbaugh. Redistributing their money wont make anyone else rich anyway.

I have come to believe that such thoughts are a big pile of moist, steamy S@*T!!!

When you have hundreds of millions...actually many billions of dollars being handed out as bonuses to the people at the top, you really aren't helping anyone at all. The richest people are already rich. (I don't know the exact figures, but we all know that a small minority in the U.S. control the vast majority of wealth in this country. Personally, I think that is a very bad, and potentially dangerous, situation.)

Call me names if you wish, but it would seem a better idea...to me at least, that all of that money would do better in the hands of the workers near the bottom. Why? Because they would actually go out and spend it!!! This in turn, would spur the economy, help the company that they work for...and thus make the owners, C.E.Os., managers, and shareholders even wealthier...and probably result in an even bigger bonus. (Yeah, yeah, what do I know about economics?...other than the fact that the ways things are going right now doesn't seem to be working very well at the moment.)

I'm not knocking the free-enterprise system, or trumpeting socialism. But I am attacking greed and stupidity. If you are setting up a system where greed, bullying and very short-sightedness are rewarded, don't be surprised if the people at the bottom get a bit upset and do something foolish. When a person who just got their benefits cut pours sugar in the gas tank of the CEO who put that order through, it might not be legal, but it IS understandable.

When you have a group of people who are at the bottom, and others who feel that they may be headed that way too, you are creating a dangerous situation. I am beginning to understand how this frustration breeds resentment, and how that resentment can then lead to violence. Like I said, such an outburst might not be legal, but it is a bit understandable. (At least for me, now.)

Tonight, while on break, I read our corporate rag. It's put out monthly I believe. In it, the CEO of our company, and the owner or our franchise, reminded us to be good & diligent worker bees for our stores. Loyalty is important! Be a good little drone and smile, smile, smile.

I had the strangest urge to purchase a 5 lb. bag
of sugar and go for a drive to corporate headquarters.

Actually, now that I think about it, I would have a very hard time as a Believer, accepting a bonus knowing that I did something so low to the people on the bottom. To get a huge financial reward knowing that you cut people's jobs and/or livelihoods would make me feel very odd, indeed. Honestly, what must be going through that person's mind when & if they are sitting in church and they hear about "The least of these MY BROTHERS"? (It should come as no surprise that the two groups of people who respond most favorably to the Jesus film that Campus Crusade made back in the early 80s, are inmates, and CEOs and board members. Each are in a type of prison.)

I can only imagine what they will say when they stand before the king and he asks them why they treated the Image of God in such a manner, especially when they were the very ones who could have afforded to take a financial hit for a longer-term gain. Perhaps Jesus will ask them how they enjoyed their oil & wine, while making sure that those under them were working all day for that portion of wheat & barley.

But then again, maybe thoughts like that
never enter the minds of people who do these things
...and that's why they don't care.

"It is easier for a camel to pass through the eye of a needle, than for a rich man to enter the kingdom of God." (Oddly enough, that very passage is mentioned in all three of the Synoptic Gospels," so it must be a big deal in the mind of Jesus.)

I happen to lean towards a Pre-Tribulation Rapture. I just think that the Scripture's evidence argues more forcefully for that position. I could obviously be wrong. Either way, it would appear to me that the hoof prints of that rider on a black horse are already among us...and his horse is leaving a substantial fecal mess all over the floor of my store. (Hey, I'm not gonna clean it up. I don't work in Maintenance.)

I dunno. I guess I'm just a bit frustrated this evening.

P.S. If it helps to cheer you up, here's a song about riders on black horses.