A portrait of the artist as a young God 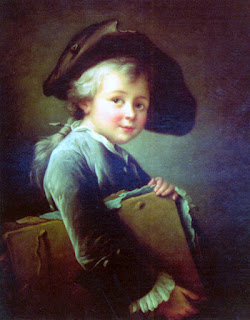 "In the beginning..." (Gen. 1:1)
In other words, BEFORE time...
So God is freaking Moses out by talking to him from a burning bush. Moses asks God what his name is...since it certainly isn't "God." (That's simply what he is.)
"God said to Moses, "I AM WHO I AM. This is what you are to say to the Israelites: I AM has sent me to you." (Ex. 3:14)
You'll notice that God did not choose the title of "I WAS" or "I WILL BE." Instead, he picks a name that seems to smack of the eternal present. Interesting choice, don't you think?
So anyway... 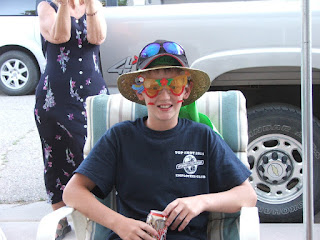 <---- That's a picture of my cousin, Anthony. He's 13 and a pretty cool kid. I got to hang out with him and a lot of other relatives a few weeks ago over in Wyoming. As it happens, Anthony talked a few of us into going for a hike in the mountains outside the lake area that we were all staying at. So we did... 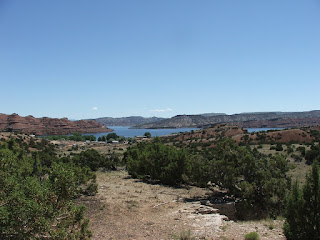 That lake you see in the distance is Lake Alcova, up on top of a mountain outside of Casper, WY. At the foot of that lake is where we had our camper. This shot may be from a mile and a half up the hills from the camp. 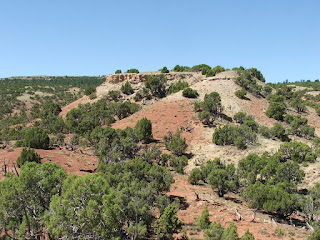 This here is what we decided would be a brilliant idea to hike up. 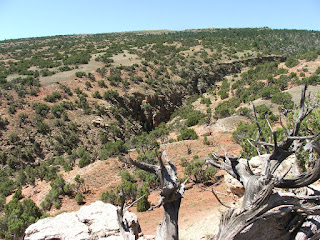 And this is the valley that we decided would be our way back. Nothing like a walk in a canyon. 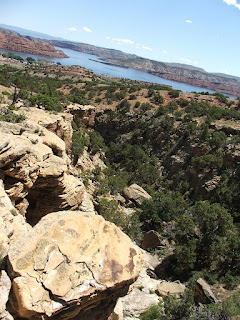 This would be the view of the canyon in the opposite direction, headed back to where we began. 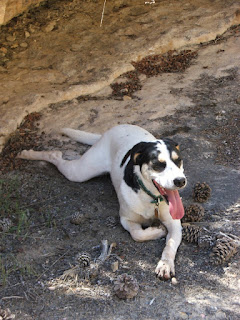 Lotus, one of our dogs, got a little pooped on the way up. (The other dog had a strange habit of licking and chewing on Lotus' tongue to get water. Poor Lotus.) 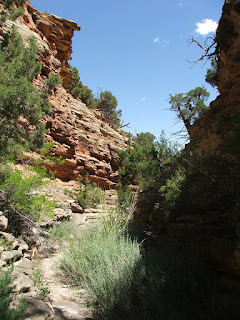 This would be a view from the inside of the canyon, after we had crawled down the sides in a very dangerous and unwise manner. 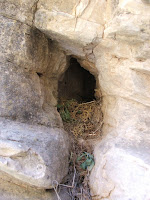 <---- In the wall of the canyon was this nest. Uncharacteristically, I decided against sticking my hand into it. (Never did figure out what was in there.) 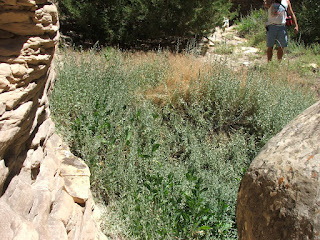 In one of the openings in the canyon was this huge field of sage. When the breeze came through, the smell was absolutely stunning.
You pay good money for sage as a spice when you are at the grocery store. Here was a giant field of it growing wild. I fully understand why so many Native American tribes think of sage as being sacred.
So as we are hiking through all of this, I asked Anthony if he thought it was possible that God regressed to be an 11 year old boy when he was creating all of this? Anthony thought that was a funny question. But seriously, the whole terrain looked like something that a middle-school boy would have designed for his own amusement.
I find "Creation" absolutely amazing. Humans create some pretty cool architecture, but no one compares to God when it comes to building stuff.
Unlike many folks, I do not take the three creation stories of Genesis to be literal. WHY? A) the first story isn't even a story. It's a poem. You are not supposed to take poetry literally. That misses the point. B) The second story contradicts the first story. So if you take them both to be literal, then you have a serious problem on your hands. C) Taking all of them literally, entirely misses the points the poem & stories are trying to make.
Unlike many other folks, there is no way that I can possibly see creation as an accident. No one in their right mind would be out walking, come across a watch on the ground, and simply assume that it was a glorious accident of the heartless cosmos that caused that watch to come into existence. So why approach a mountain & canyon, or the universe like that?
Since God makes it clear by the choice of his own name that he exists outside the boundaries of time, why do we always try and glue him into the same linear concepts that we are stuck in?
God doesn't need time. To our eyes, perhaps that canyon I walked through took thousands or even millions of years to come to be. However, to God, it all came about in an instant.
OR, maybe God did choose to use a concept of time when making stuff. Maybe he set something a side for a while and decided to make monkeys & frogs, because he thought they were funny looking. Maybe he worked on a mountain for a while, left it for what ever reason, and then came back to chisel on it at a later date. I have no idea. He can pretty much do what ever he wants to.
We love to create God in our image. 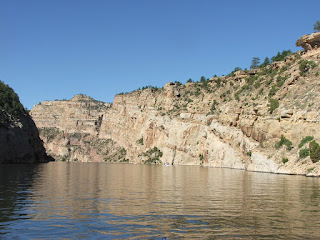 So anyway, later my uncle took me on a boat ride through the canyon that the lake & river had flooded.
It's fascinating to see the sculpting on the walls. 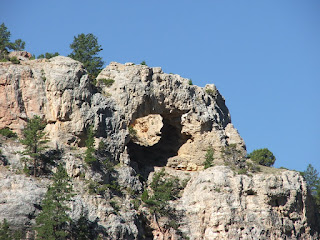 You can explain to me through science how a hole is created in the side of a mountain through erosion, winds & rain over the course of time. But you will never convince me that it was all a random accident.
Perhaps God was shooting hoops. Maybe he wanted a target to throw things through. Maybe he just wanted to see confused looks on people's faces as they tried to figure out how that hole came to be. 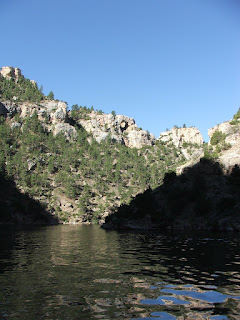 <---- Same hole, greater distance. (Birds like to fly through it. Maybe that's why God made it.) 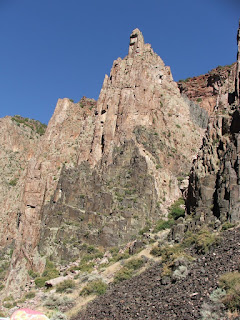 You have to look closely to be able to distinguish it, but there is a giant pillar of rock in front of that cliff. There is quite a bit of debris all over the place. Kinda like God decided to just take a pick ax to the spot. 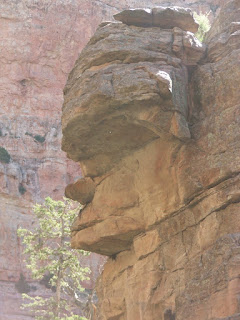 <---- This is officially called the "Grumpy Old Man in the Mountain." I think he looks a bit forlorn, myself.
Who says God doesn't have a sense of humor?
God is an artist. 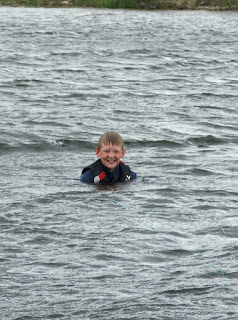 Since I began this with a picture of Anthony, I shall also end it with one.
He's a very good water skier...which seemed a fitting way to get cool after that hike.
I would wager that God is a fairly good water skier too. I mean, Jesus did it bare foot up in Galilee.
Please do not try and fit the artist known as "I AM" in a box. He's too big to fit...even if he ever was an 11 year old boy.
Peace
Joe
Posted by Joe at 3:29 PM