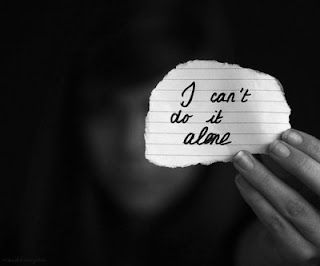 So I woke up this morning to an e-mail from Pastor Scott over at Living Waters. I had met with him last week about some issues, worries, stressors, frustrations & concerns of mine. (You know, the usual tiny, little things that can grind a person into the ground.)

The e-mail had a quote from Jeremiah in it; "I will be found by you, declares the Lord, and will bring you back from captivity."

I actually have been feeling rather trapped and captured for weeks now. I wont bother going into detail, but suffice it to say that when stuff like this comes over me it actually does have a paralyzing effect on me. It can get me so low that I can barely do anything outside of the normal routine.

So I end up feeling helpless, very helpless indeed.

And actually, I would argue that this feeling of helplessness is a very good thing.

As a "Guy," I would like to be able to control everything around me. Frankly, I think that this is a fairly normal human desire. However, it certainly does not embrace most of reality. The vast majority of life is far outside anyone's control.

It forces me to run back into the arms of the very one that I seek to keep at arms length most of the time. While my spirit wants to dwell in the arms of my Father & Lord, my flesh wants to keep him away and try to call the shots. It's extremely uncomfortable.

However, since meeting and praying with Scott last week, my gray skies have begun to slowly, but surely, clear up. I wish I could say that it was an instantaneous & miraculous improvement, but it wasn't. I would argue that, in my case at least, this was also a good thing. If everything had happened in a snap, then I might have taken it for granted.

So I end up feeling helpless. I don't really have it in myself to hand everything over to him. That old, sinful nature is right there doing it's thing...hence the feelings of helplessness. But I am realizing what a good position that actually is to be in. It demonstrates just how much I really do need him to do the very things I can't do. And the funny thing is that scripture makes it clear that this is the very kind of work that God enjoys doing the most...being a God who redeems with great joy & mercy any and all beggars who come to him with broken hearts & lives.

Once upon a time, YHWH reminded another child of his that "My strength is perfected in your weakness."

So I will embrace this helpless feeling.
Because when I think about it,
it actually feels really good.
It's where I belong.

A fitting song, with a fitting mood, for a fitting feeling.