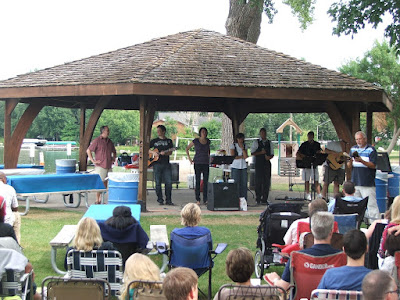 "We who are strong ought to bear with the failings of the weak and not to please ourselves. Each of us should please his neighbor for his good, to build him up...May the God who gives endurance and encouragement give you a spirit of unity among yourselves as you follow Christ Jesus, so that with one heart and mouth you may glorify the Father of our Lord Jesus Christ." (Romans 15:1-6)

So today Living Waters had a picnic at a local park. (I prefer to think of it as an early church style communion. i.e "Love Feast.") We had a worship service, baptisms, and copious amounts of food.

The photo above is our house band. We played acoustic style, so as not to drive the neighbors nuts. "Christians" can be obnoxious enough to begin with, so we figured that we wouldn't add to it. (If you look carefully at the right side, that there is Pastor Scott in the blue shirt showing off his baptismal flip-flops.)

I enjoy the folks at Living Waters. To be honest, they totally intimidate me for reasons that I don't fully understand. (Let's just say that last Fall I lead a 6 week Sunday School class and got so worked up that I gave myself a depressive episode that scared numerous people.) I think I may feel intimidated by the people there because they actually accept me as I am, mess and all. In fact, I think that some of them might even like me. (Seriously, that's kind of a new sensation for me that I am still getting used to. I honestly do not feel particularly comfortable around many who call themselves "Christian." ) This is the first body of worshippers where I felt that I could be honest about my various struggles and not be judged. Let's face it, "Christians" are notorious for being hypocrites & judgmental. We've worked really diligently to earn that reputation.

Not so with these people.

So I was having lunch and was talking to people. It was interesting to hear what they had to say. The majority of what I heard were people being honest about stuff. "I'm struggling with this, that and the other thing...but I'm trying to trust God that he'll sort it all out. I don't get it, I don't...but he does." Variations on that theme were quite common.

That's the way it should be in the body of Christ. The term Hypocrite comes from the Greek theaters, and it means "One who wears a mask." Jesus hates masks!

Believers were told by Jesus that if you are going to follow him into his kingdom, then you had better help others along the journey. "I'm washing peep's stinky feet. You should do this too." The only way that you can properly help others is to start by admitting your own mess, and that you are in need of a massive savior with massive grace & mercy.

I don't know everyone at this body, but those I do know seem to be rather comfortable letting me know the good & bad in their lives. I feel oddly comfortable belching most of my mess out in front of them too. They seem to know instinctively that I'm a bit nuts, and goofy as can be, but they still put up with me. When I receive that kind of grace from others, offered in the name of our king, it makes me want to give right back to them. I think that is what building each other up for the glory of the Father is all about.

On the way home I had my radio on...loud as usual. I heard my favorite Van Halen song, "Dance the night away." Which stirs me to drive erratically as I sing along...causing the other drivers fits & seizures, I'm sure.

But I also heard another song that I was unfamiliar with.

<----- Romantica is "Alternative/Country" band. Which means that they'll probably never make a lot of money...or date Paris Hilton. But they do have the distinction of having one of the best names for an album I've ever heard; "Control Alt COUNTRY Delete."

To my knowledge, none of them are followers of Jesus. Yet I have come to realize more & more how God uses anything he wants, and everything at his disposal to demonstrate his love and reveal his glory.

Sooooooooo, I listened to the lyrics of this song. They made me think about MY church and MY people...the body that has welcomed me...mess and all. Tears began to form, and I DID praise my Father who is in heaven.

There is no video for this song. But I'll link the music none the less. I ask you to read the lyrics as you listen. I'm wondering if it will have a similar effect on you.

Give us, Lord, we are so tired.
Are will's are worn. Are minds are fired.
We are not much for holding on to what is old, past and gone.
What was once, when we were young,
let it be done. Let it be done.

Thank you, Father, that you show up in even the smallest things. Bless this body, and don't let it fall.