Prophets "Outside" the "church" 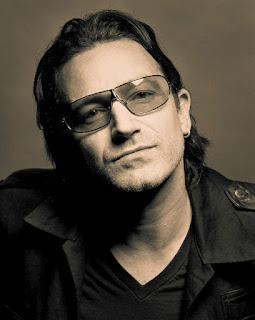 It is my job as a pastor and professor to speak the name of Jesus and proclaim the news of the gospel into whatever reality the prophets expose and call attention to. If they also do it, that's fine, but if they don't that doesn't mean that they aren't speaking/acting on God's behalf."
Do you think a prophet loses something if he or she were to become "churchified" in some way?

Yes, I think so. I guess he'd lose the edge of surprise. I've been a part of the institution of religion all my life and have been quite happy doing it. I felt that's what I was called to do. But I depend for a lot of my insights and language on people who are outside the Church. That doesn't mean they are outside of Christ, but they are outside of the conventional expectations. I need that. If I'm just around people who talk the way I do, I lose perceptive accuracy, sharpness. And I think Bono is doing that for many.
If you are so inclined, here is the full interview that I watched. It's a very, very good interview...but also 30 minutes in length.
Now I know what some may say. "Yeah, Bono does some good work, and says some nice stuff about peace & love and such. But that doesn't make him a Believer." Fair enough.
For the record, I don't want to get into an argument over signing or reciting a specifically selected confession of faith. Frankly, embracing faith through mere intellectual ascent only gets you so far. I've been burned more times then I can now count by folks who signed the right confession of faith, but still produced no fruit in keeping with repentance, to settle for simply that argument.
That having been said, a number of years ago the French journalist Michka Assayas wrote a book with Bono. Actually, it was simply a prolonged conversation that they had. The covered a number of topics, but also the areas of Bono's faith. So, for the record, and in his own words, here is what Bono has to say about the importance of Jesus in his life.
http://www.christianitytoday.com/ct/music/interviews/2005/bono-0805.html <--- You can read the full article from Christianity Today at that link.

Bono: My understanding of the Scriptures has been made simple by the person of Christ. Christ teaches that God is love. What does that mean? What it means for me: a study of the life of Christ. Love here describes itself as a child born in straw poverty, the most vulnerable situation of all, without honor. I don't let my religious world get too complicated. I just kind of go: Well, I think I know what God is. God is love, and as much as I respond [sighs] in allowing myself to be transformed by that love and acting in that love, that's my religion. Where things get complicated for me, is when I try to live this love. Now that's not so easy.

Assayas: What about the God of the Old Testament? He wasn't so "peace and love"?

Bono There's nothing hippie about my picture of Christ. The Gospels paint a picture of a very demanding, sometimes divisive love, but love it is. I accept the Old Testament as more of an action movie: blood, car chases, evacuations, a lot of special effects, seas dividing, mass murder, adultery. The children of God are running amok, wayward. Maybe that's why they're so relatable. But the way we would see it, those of us who are trying to figure out our Christian conundrum, is that the God of the Old Testament is like the journey from stern father to friend. When you're a child, you need clear directions and some strict rules. But with Christ, we have access in a one-to-one relationship, for, as in the Old Testament, it was more one of worship and awe, a vertical relationship. The New Testament, on the other hand, we look across at a Jesus who looks familiar, horizontal. The combination is what makes the Cross.

Assayas: The Son of God who takes away the sins of the world. I wish I could believe in that.

Bono But I love the idea of the Sacrificial Lamb. I love the idea that God says:"Look, you cretins, there are certain results to the way we are, to selfishness, and there's a mortality as part of your very sinful nature, and, let's face it, you're not living a very good life, are you?" There are consequences to actions. The point of the death of Christ is that Christ took on the sins of the world, so that what we put out did not come back to us, and that our sinful nature does not reap the obvious death. That's the point. It should keep us humbled… . It's not our own good works that get us through the gates of heaven.

Assayas: That's a great idea, no denying it. Such great hope is wonderful, even though it's close to lunacy, in my view. Christ has his rank among the world's great thinkers. But Son of God, isn't that farfetched?

Bono No, it's not farfetched to me. Look, the secular response to the Christ story always goes like this: he was a great prophet, obviously a very interesting guy, had a lot to say along the lines of other great prophets, be they Elijah, Muhammad, Buddha, or Confucius. But actually Christ doesn't allow you that. He doesn't let you off that hook. Christ says: No. I'm not saying I'm a teacher, don't call me teacher. I'm not saying I'm a prophet. I'm saying: "I'm the Messiah." I'm saying: "I am God incarnate." And people say: No, no, please, just be a prophet. A prophet, we can take. You're a bit eccentric. We've had John the Baptist eating locusts and wild honey, we can handle that. But don't mention the "M" word! Because, you know, we're gonna have to crucify you. And he goes: No, no. I know you're expecting me to come back with an army, and set you free from these creeps, but actually I am the Messiah. At this point, everyone starts staring at their shoes, and says: Oh, my God, he's gonna keep saying this. So what you're left with is: either Christ was who He said He was—the Messiah—or a complete nutcase. I mean, we're talking nutcase on the level of Charles Manson. This man was like some of the people we've been talking about earlier. This man was strapping himself to a bomb, and had "King of the Jews" on his head, and, as they were putting him up on the Cross, was going: OK, martyrdom, here we go. Bring on the pain! I can take it. I'm not joking here. The idea that the entire course of civilization for over half of the globe could have its fate changed and turned upside-down by a nutcase, for me, that's farfetched …

Bono later says it all comes down to how we regard Jesus:

Bono: … [I]f only we could be a bit more like Him, the world would be transformed. …When I look at the Cross of Christ, what I see up there is all my s--- and everybody else's. So I ask myself a question a lot of people have asked: Who is this man? And was He who He said He was, or was He just a religious nut? And there it is, and that's the question. And no one can talk you into it or out of it.

To me, that sounds a lot like a Billy Graham crusade with some strong language thrown in.

I'm never really sure what people want or expect from other Christians/Believers. Far too often it is some religious code phrase or hair cut...with plenty of Americanized mythology thrown in for good measure. I'm not sure how you'll get that out of an Irishman.

John the Baptist, Jesus, Paul, Peter, and John all pointed out that who have to look for the fruit. Mere words/code phrases aren't enough. The Pharisees & Sadducees had plenty of those...and they ended up as kindling.

Look, I'm not trying to be an "Apologist" for Bono, U2 or anyone else. I'm just trying to point out that God, in his sovereign ways, is rather big and often mysterious. He also tends to not let opportunities go to waist. Maybe some Believers won't be inspired by a guy like Bono. That's fine. I wont knock them. But I have also seen young Christians, myself included, BE inspired into a closer walk with Jesus...in an admittedly unconventional, yet no less real, sort of way. If God could talk through a donkey, I don't see why he can't use a crazy Irishman. After all, "She moves in mysterious ways." (Blasphemy!)

NOW, that the more serious stuff is over, I think I'll just link up the various songs of U2 that I love that deal with Jesus. Enjoy!
That one might be a bit controversial. However, any Believer worth their salt will admit to struggling with doubt and such. If you can look me in the eye and tell me that you don't, I simply do not believe or trust you.
And last but not least...and just for the cheeky fun of it.
I LOVE that version.
Again, Peace. :)
Posted by Joe at 4:46 PM