Observations on a Road Trip 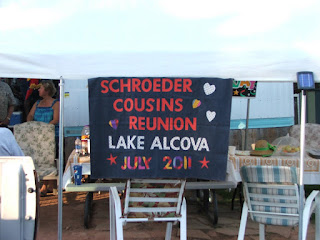 About every three years, the folks on my mom's side of the family have a reunion of sorts. This year, it was held out in Wyoming. When Great Grampa Schroeder got off the boat from Sweden, he settled in North Dakota. Most of the relations either stayed there or moved west. Mom moved to Minneapolis. So, off to Wyoming we went this time.

I was given the option of staying home and dog-sitting. However, being that money is generally very sparse for me, and that I hadn't had a proper vacation in years, tagging along seemed like a good idea. That, and the fact that if I didn't go, I would get no sleep what so ever, worrying constantly about my family doing a long distance drive with out my expertise behind the wheel.

The Go-Go's - Vacation by EMI_Music 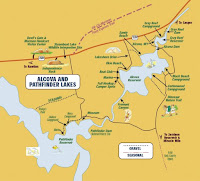 <---- Our destination was Lake Alcova, about half an hour outside of the mighty metropolis of Casper, Wy. Thanks to damming the N. Platte river, there is now a rather large lake up on top of a mountain. The fishing is supposed to be excellent.

That having been said, any trip has it's share of the unusual and such. I shall now endeavor to regale you with tales and observations.

To get to Wyoming, you have to cross through the vast wasteland known as South Dakota. My conditions for driving everyone was that I would get to see the Black Hills, which is your reward for putting up with the rest of South Dakota. From the eastern border of S. Dakota to the Black Hills is about a 6 hour drive...but it feels more like 12. There simply isn't all that much to see. Desolation has it's own beauty I suppose.

It makes you realize how many trees Minnesota has when you enter an area without many. Also, where as Minnesota has a ton of small towns, they are generally about 10 miles apart. In S. Dakota & Wyoming, once you are away from a town, that's IT! 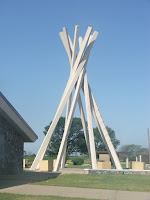 <---- I'm weird, in that I notice the little things...like the rest stops that States erect for weary travelers. When we left, our State government was shut down over the budget. So there were no rest stops, per say. Anyway, you get into S. Dakota and all of the stops have a teepee in the front of them. Kinda cool, actually.

The rest stops in Wyoming were of a different breed all together. They were self-contained units that had artificial grass, were solar powered, and had composting toilets. (STINKY!!!!) 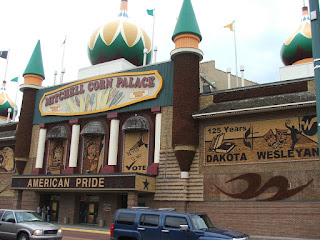 On the eastern side of South Dakota is one odd site that is worth a visit. It's the Corn Palace in Mitchell. For over 100 years, the outside of the building has been decorated with crops. (Hence the name) Unfortunately, it's still early in the season, so the best we got was wheat on the exterior.

Actually, I think it would be pretty awesome to see a band like U2 perform in a small theater like this. Bono could throw freshly popped kernels to the audience. 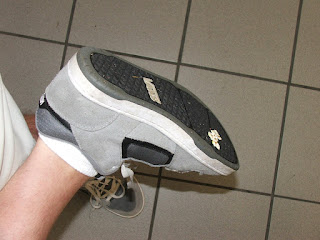 <---- I know that this may come as a shock, but I actually got some corn stuck on the bottom of my Vans while walking about the interior. I know! What are the odds of that happening???

Once you cross the Missouri River, S. Dakota becomes a bit like a scene from a science fiction film. It gets greener, yet still has that sense of mournful desolation. You could easily picture space aliens landing, taking a look around, and then deciding that it simply isn't worth the effort to conquer. 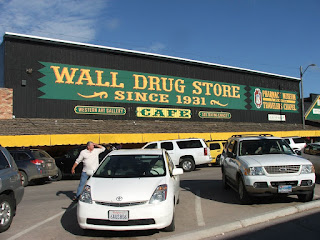 However, I did finally get to see the famous Wall Drug that I have witnessed on so many bumper stickers. Wall became famous in the late 1930s. They were clever enough to advertise free ice water to travelers headed out to see Mount Rushmore. The rest is history. 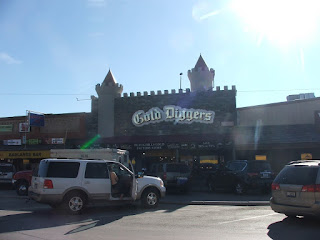 <---- There are other sites in Wall, too. This one made me recall fondly, the various women I know. 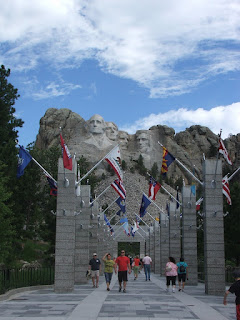 Naturally, you can't go to the Black Hills and not see Mt. Rushmore. To be fair to S. Dakota, the Black Hills is incredibly beautiful. Also, when you stand in front of this mountain and think of the time it took to carve this monument, it is very impressive.

You also realize how fat the average American tourist is. 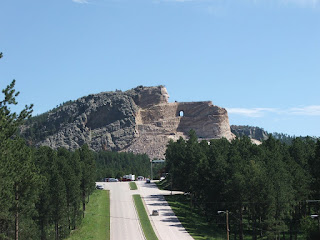 <---- Not to far from George & co. is a new monument being carved. It's of Crazy Horse. (I was rather disappointed to see that Neil Young was not included in this.)

All that you can see at present is his face, with the beginning of an arm extended. At this point, it isn't worth the $27 to enter. I recommend taking a picture from the side of the road.

Wyoming is a whole other mindset. I like to joke about the "Minnesota Accent," where we stretch out our vowels. (My name is not Joe, it's Jooooooooooooooe.) But all of my relatives out in Wyoming have their own unique accent. They don't say "Get." They say "gIt." Also, a lady is not a "Woman," she's a "WHOAHman."

Where we stayed, all of the people were very friendly...in a cowboy kind of way. Like I said, Lake Alcova is a big lake up on a mountain. The resort area is not exactly the kind you would see on the Rivera. But for cowboys, it's perfect.

Actually, now that I think about it, I don't think I've ever seen so many tattoos in one place before. Everyone had at least one. Unfortunately, it makes you realize how time does a number on you. That tattoo may have looked hot when you were younger and in great shape. But now, due to the passage of time, it looks like you have two on your chin. (Another valid reason for me not to get one...aside from the pain, and the weeping like a girl that would result.) 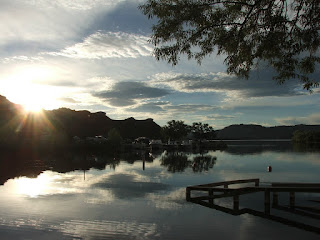 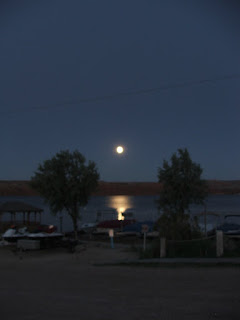 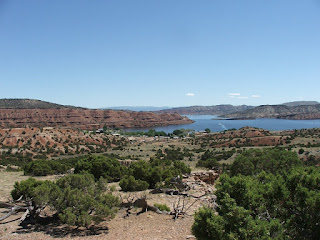 <---- The view from the hills above. Yeah, we took a little hike up the mountains. My thighs were burning for 2 days afterwards. 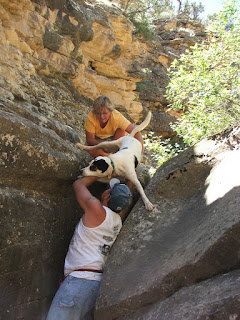 <----- The dogs had a difficult time getting down the canyon on the way back.

Actually, the walls of the canyons were beautiful. Makes you realize how creative an architect God really is. Although, I have to say that I was disappointed in not seeing any rattle snakes. I seriously wanted a picture of one...and then to kill it and keep it's skin & rattle. 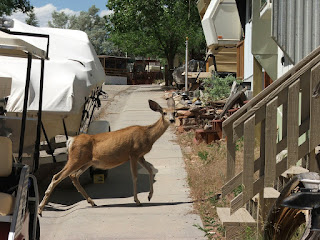 Even though I saw no snakes, there certainly were plenty of other creatures hanging out. It's funny how wild animals can adjust to humans. The deer routinely wandered through people's yards and such. Lot's & lots of bunnies, too. 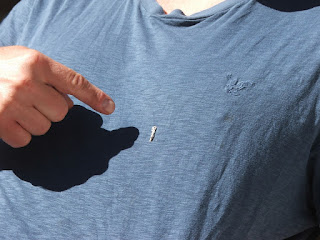 In fact, nature co-existed with us to such an extent that the friendly birds gave me a welcome present while I was out boating. 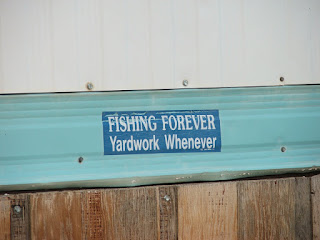 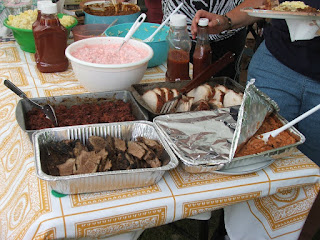 Normally, I'm fairly conscious of what I ingest. I'm trying to drop a few pounds.

Well, throw that idea out the window. I think I ate more meat in those few days than I have in the past 6 months.

Being a history geek, I had to head back into Casper to see some sites. It appears that much of the west was settled around forts and such. Which makes sense. When you are pushing the original inhabitants off of the land that they have been on for centuries, you might get a bit of resistance from them. 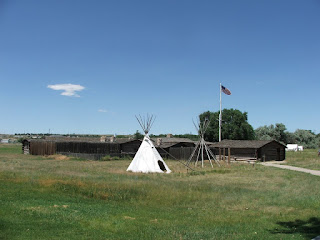 <---- This is an actual photo of downtown Casper, Wyoming. As you can see, not much has changed from the good old days.

When all was said and done, we packed up and headed back to Minnesota. One of our cousins showed us a short-cut to get us back to the Black Hills. It cut off 90 miles of road for us, but provided us with the most empty & vacant view I've ever seen. (And I've been to Nebraska!)

A couple of times while driving, I would speak up and say "Hey, would you look at that!" A family member would respond with "See what?" To which I would retort, "Exactly." 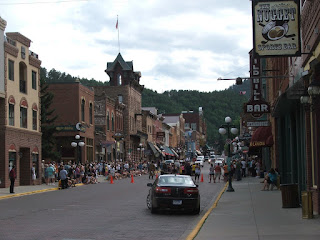 I was a huge fan of the cable series "Deadwood." The writing was brilliant...like Shakespeare set in the old west. Naturally, I wanted to see it on the way home.

To be honest, it's pretty much a tourist trap. Still, I dig the old architecture, and it's location is beautiful. I just wish that I had more time to explore the historical sites around the area. Unfortunately, I was dealing with two old geezers and a sister with a gimpy foot. Such is life.

A couple of final thoughts.

I like music. I like to listen to it when I drive...LOUD. Unfortunately for me, my parents do not. (Unless it involves a church organ and mournful dirges.) Dad didn't even want me to listen to my Ipod. "It's illegal to drive with those in some States," he would say. So that was out, and the hypnotism of the bleak landscape did it's work on my brain.

Also, my Dad can snore like a warning siren. I'm not joking when I say that his snores have their own echos. (My Mom has a quieter snore that sounds a bit like a steam pipe.) On our last night in a motel, I actually had to take a pillow and sleep by the sink near the bathroom to escape the sounds of buffalo rampaging across the prairie that emanated from my father's lungs.

When he woke up in the middle of the night to see me sleeping on the floor, he apologized profusely. I told him to leave me alone and just let me sleep. I was able to listen to my Ipod while driving the next day. (Go Deep Purple!)

The secret to any vacation is to simply treat everything that happens as all a part of the adventure...both good & bad. All in all, it was a good trip. 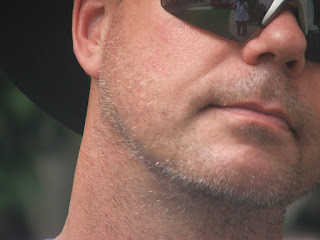 <---- This is what a week of no shaving looks like. Don't hate me because I'm beautiful.

P.S. I wonder where I'll go next time?

And if you read this far, you should be rewarded with a song.