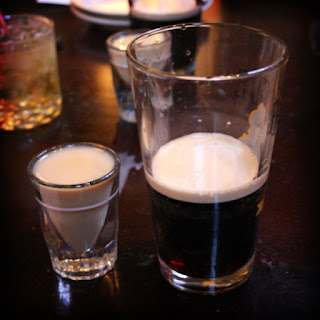 <---- Guinness, Bailey's & Jameson; aka an "Irish Car Bomb"
Ever since I got back from my vacation out in Wyoming I've been in a bit of a downward spiral. I tend to absorb everyone else's frustrations & worries to begin with. So, starting with that, toss in a whole bunch of other stressors and mix it well with the minor form of depression that I have...you get quite a cocktail.
The truth is, I spend most of my days feeling like a complete fraud, and that my life is a joke. I wont bother to go into detail at this time, but suffice it to say that I am generally wracked with doubt most of my waking hours. (Yeah, you can tell me not to do that all you want. But it's easier said than done. It simply is the way that my brain is wired.)
Anyway, I've been writing this letter to God for quite some time know. I got more of it written tonight. Essentially, I was explaining to him why I feel like a fraud...and wouldn't a nice heart attack in my sleep be a great way to get me out of here? I just feel like I'm wasting my time in this life. Plus, I am so soaked in sin...in thought, if not deed, that why would God possibly trust me with anything in the first place?
Which all demonstrates what a lack of faith I actually have. Which, in turn, gets me spinning even more when I realize and admit that. Great! (I can easily identify with Paul in Romans 7..."When I want to do good, evil is right there with me.")
I must say, I spent some time today talking with my Dad. It helped me a great deal. My father has a good heart, and often gives much wiser council then I expect. Also, a few nights ago, I shared my frustrations with a friend. In turn, he shared his own struggles of a different nature. So often, when we are struggling with something, we feel like we are the only one who is struggling at all. Everyone else is fine & dandy. That's obviously not true...but that is how it feels. Not to say that misery loves company. But knowing that other people have their own frustrations is a comfort of sorts. You know that you are not alone.
Peter Rollins is a Christian Thinker that I have recently begun to follow. I find him quite fascinating. I still know very little about him. For starters, he's Irish. And guessing by his accent, he is from Belfast or some other place in Northern Ireland. He's friends with Rob Bell & Shane Hipps, and appears linked in many aspects to the "Emerging Church" movement. (So I already know who wouldn't like him...and I think that's a pity)
Anyway, I stumbled across a video he did a few years ago. It helped me this evening in a completely unexpected way. It is all about doubt and how it ties into Christianity. Many, many Christians I know, like to quote bible verses about why we are not supposed to doubt. Frankly, I think that those who uses passages in that particular manner are taking the verses out of context.
There is a healthy form of doubt. It's when you doubt, but truly want an honest answer to what ever it is you are struggling with. It is not the "Yeah, whatever. I know nothings gonna happen" kind of doubt. That really IS unbiblical, and to quote a favorite thinker of mine, "That is just unbelief masking itself in self-pity."
So, with out further ado, here is the video that helped me out this evening.
I find that to be a rather healthy & satisfying approach to the matter.
I think I like Pete...but that could just be the accent.
Here are a couple of other videos that you might find interesting.

Wrestling with the Divine from Peter Rollins on Vimeo.

When you consider that the ancient Hebrews viewed God as NOT someone to be understood or explained, but instead to be experienced, what Peter says makes a lot of sense. (It's no wonder that so many Christians in the West get all out of whack by trying to reduce the God of Scripture to a theological formula that fits neatly on a page.)
Speaking of that, pay careful attention to this last video. I am an atheist when it comes to atheists. I don't believe in them. I DO believe in Nihilists, i.e. those who say that life is pointless, meaningless, etc. That's a natural fall-back position for just about everyone going through a hard time...myself included, obviously. But actual "Atheism?" No, no, you believe in a god. You just dislike the one that you have constructed in your head. Which makes sense since we are always creating a god in our own image.
With that in mind, watch this one...

Food for thought.
I'm not sure if a guy like Peter Rollins is for everyone. Probably not. But then again, James Dobson doesn't do much for me. That doesn't mean that God can't use both of them for his kingdom. Maybe that's why I am attracted to much of what Peter has to say. He's willing to embrace the divine mystery of the God of the Bible.
Helped me out tonight, anyway.
Peace
Joe
P.S. One more parable from Mr. Rollins. Pay careful attention to the ending. It's not what most would expect.

The Rapture from Peter Rollins on Vimeo.