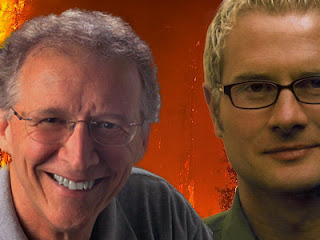 "Seek the Lord while he may be found; call on him while he is near. Let the wicked forsake his way and the evil man his thoughts. Let him turn to the Lord, and he will have mercy on him, and to our God, for he will freely pardon.
"For my thoughts are not your thoughts, neither are your ways my ways," declares the Lord. "As the heavens are higher than the earth, so are my ways higher than your ways and my thoughts than your thoughts."
Isaiah 55:6-9
Anyone who has been paying attention knows that there was a raging debate going on in the American church this past late-winter over the subject of hell. Calvinists and other Neo-Fundies were having seizures over the book "Love Wins" by Rob Bell. On the other end of the spectrum, those who enjoy a very liberal interpretation of scripture, were rejoicing because they believed that someone famous was now backing a type of Universalism that they hope for. In the middle was everyone else, from moderate Calvinists to "Emergers."
What I thought to be almost completely lacking was any type of civil tone. (And I'm as guilty as the next person for getting a bit emotional and stirring the pot.) I had more than a few friends lash out savagely at John Piper for some of the ridiculous things that he said. (Honestly, one would think that a man as obviously gifted and bright as he is, would wait and actually READ a copy of the book before tweeting out "Farewell, Rob Bell." Talk about putting your foot in it.)
To sum it up, most of us were behaving badly...and still are to some degrees.
This is a serious subject that we need to try and get right. We shouldn't be basing people's ultimate destinies on wishful thinking or "I don't think God would do something like that..." Nor should we be so arrogant to assume that we have God all figured out because we have a Doctorate in Theology, and can reduce him to a statement on a piece of paper.
Whatever our views, we had better approach all of it in a humble manner. Yeah, I know, not the strong suit of most Americans...let alone American Christians.
I'll shut up now and just let you watch the video. I think that Francis Chan nails this whole issue perfectly.
I want to thank Margaret for linking this video on FaceBook today. I thought it was excellent.
Peace
Joe
P.S. Can't wait to get a copy of this book. (I wonder what John MacArthur will say?)
Posted by Joe at 6:10 PM