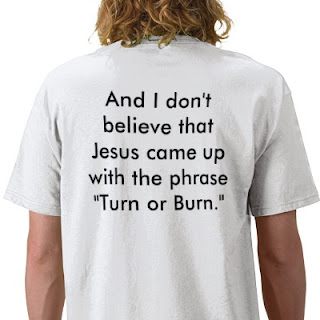 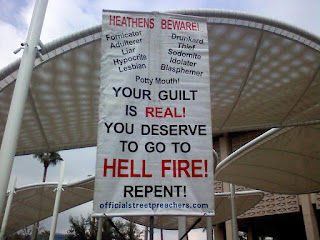 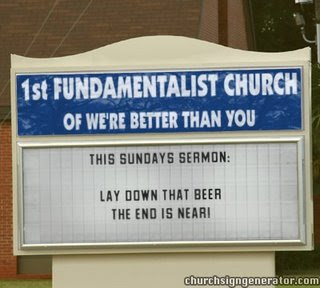 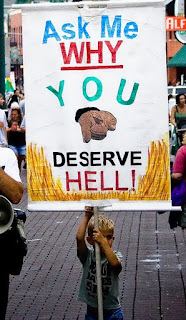 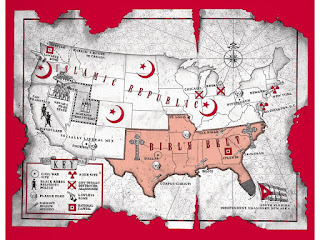 Over the last few weeks, I I've been reading a lot about the rise of "Neo-Fundamentalism" in the American church. I have to admit that it really has me worried. It's not that there are no fundamental ideas that the church needs to hold to. There certainly are. However, it is the Orthopraxy of the average Fundamentalist that always worries me. Frankly, I consider it to be little more than a modern form of Pharaseeism in christian garb.
I think that what I'll do is simply link a variety of posts that I've been looking at, and you all can read it at your leisure.
What I do want to state for the record is what I really do believe is central and fundamental to Christianity. Where we go from there can vary. Then I'll do some very basic definitions.
First off, what I believe is absolutely essential to the christian faith is this guy named Jesus that you can find in the four Gospel accounts of his life. Jesus is absolutely central...and not just his person, but also what he accomplished on the cross. With out that, Christianity is just another religious system where people strive to earn their way to God.
I should point out that it wasn't just the crucifixion that mattered. (The Romans seemed to have made that into a bobby.) Hundreds of people were crucified everyday around the empire. However, it isn't everyday that someone is resurrected after that. Paul wrote in 1 Corinthians 15, that with out the resurrection, the whole concept of Christianity is a joke. So this is central and fundamental.
That having been said, the average "Fundamentalist" is not merely sticking to this idea. You can check this link for further explanation, but suffice it to say that Fundamentalism arose as a response to "Liberal" theology. (By "Liberal" I do not mean politically. I know more than a few people who hold to a very conservative & orthodox view of Scripture who are politically to the left. No, Liberal Theology often has a tendency to treat that bible rather loosely. Sometimes it seems that they reduce the bible to little more than a book of good suggestions, and that Jesus was a nice guy who could help you with your karma.)
This article is kind of a dry overview of Fundamentalism in general, but I think it's very accurate. http://en.wikipedia.org/wiki/Fundamentalist_Christianity The fact of the matter is that I would agree with most of what they state. But it's when they get into the nuances and militancy of their positions that I get really bothered.
Professor Roger E. Olson has been a big influence on me. I think that he has written a number of excellent posts on the rise of Neo-Fundamentalism. Dr. Olson is a "Classical Arminian" scholar, so you should know that up-front. Here are some links to articles that I found very interesting.
This particular link is a whopper. It's excellent, but it does contain plenty of stuff that is way over my head. However, I think that it gives the best overview of this problem that I have seen in recent years. (And it's what first got me rolling on all of this.)
http://rogereolson.com/2011/03/24/the-new-fundamentalism/
Another excellent article on the ways that many Neo-Fundamentalists often treat other Believers.
http://rogereolson.com/2011/03/29/division-in-the-evangelical-house/
Finally...and this one is mercifully short, here is a response that Dr. Olson posted that I think truly sums up the problem.
http://rogereolson.com/2011/03/30/great-comment-re-evangelicals-behaving-badly/
I'm going to repost a chunk of it here, because I think the writer articulates the problem very well.

"Eugene Peterson articulated it best for me first in a lecture I heard him give. From John 14.6, Peterson says, “The Jesus Truth, only when it is wedded to the Jesus Way, produces the Jesus Life.” I find that many in the neo-fundamentalist fold have separated Jesus Truth from the Jesus Way. There is a strong emphasis on truth, protecting the truth, insisting on the centrality of the truth. We bicker and argue about differences of truth and belief. The Jesus Truth, as I see it, is what we put in the dogma, doctrine, opinion categories you and Stan Grenz identified: these are beliefs. These are things we can and will disagree about. We will even disagree about how many things should go into which categories.

The Jesus Way is something that often gets left out of our theological discussions and disagreements. In omitting it from our conversation about God, we miss a current that runs right through the biblical narrative: the way of God and the way of Jesus as opposed to the ways of the world (e.g. the ways of “the other nations” in the OT, the way of the Pharisees in the NT). The difference between the church and the world is not merely in what we believe; it is also in how we live, how we orient ourselves to that belief. The Jesus Truth, only when it is wedded to the Jesus Way, produces the Jesus Life.

The major problem with neo-fundamentalists to me—and this is what I hear you saying—is that there is a deep divide between the Jesus Truth and the Jesus Way. They insist on certain beliefs, but they do so in a way that is incongruous with the way of Jesus. They behave badly: they ignore the Jesus Way."

It has been my experience, and I think that church history will prove me right, that "Fundamentalism" often leads to a very separatistic faith...i.e. "We" VS. "THEM." And my experience has taught me that this leads to a "Fortress Church" mentality, where christians hide inside their castles, protecting themselves from the sinners outside. Odd dogmas that are not essential are raised high as a way to separate good christians from bad christians. Once that distinction can be made, then you cut yourself off from fellowship with other Believers...because they are most likely damned, anyway.
Oddly enough, for some reason Fundamentalism...at least in the more traditional sense, also leads to a very narrow minded intellectual strain. (Frankly, they tend to be ANTI-Intellectual.) They are generally hostile to modern science...i.e. any thought that there might be a certain degree of truth to some form of evolution or the fact that the universe is more than 6000 years old, etc.
Frankly, I don't see that resembling anything like the Jesus of the Gospels. Furthermore, I really & truly think it smacks of "Works!" Sure, "Saved by Grace" and all that is nice. But it's better to have a particular theological confession to sign. You see, Jesus spent many a sleepless night worrying about wether we would say that the New Testament (Which wasn't compiled for 2 centuries later) is Infallible, Inerrant or both. Jesus was pretty insistent that to follow him, you had be into premillenialism.
The very idea that one should have to subscribe to a particular strain of theology hook, line & sinker before one can know for sure if they are saved or not really is a form of works, and those who espouse it are simply modern day Pharisees.
I also see a serious lack of trust in God and his kingdom. Billy Graham was often vilified for daring to include Catholics & Mainline/Liberal denominations in his evangelistic crusades. I think that Billy trusted God enough that once the Holy Spirit was a part of a person's life, the Spirit could be trusted to work God's will in a person's life.
Those who say that you have to have a particular, dogmatic view of God to be saved are demonstrating that they really do NOT trust God. Instead, they merely trust their particular intellectual interpretations. It is no different than all of the legal hoops that the ancient Pharisees had constructed by the time that Jesus showed up.
And guess who Jesus had the most frustrating time with?
It's just a thought.
Peace
Joe
P.S. For what it's worth, I saw a movie a few years ago called "Jesus Camp." Here's a clip from it. (The documentary is a fair one. Everyone filmed gave their complete consent both before and after.) In no way do I make the claim that all Fundamentalists espouse these views. However, it IS my view and experience that this is quite often the natural result of embracing a narrow, "Fundamentalist" worldview. Pay close attention to the tone & choices of words. I think that you will quickly conclude that there is a rather hostile We VS. Them mentality at work. I do not think that this is the attitude that best displays Jesus
Mom: "Did you get to the part on here where it says that science doesn't prove anything?"
Son: "I think personally Galileo made the right choice by giving up science for Christ."
Never mind that the Pope John Paul apologized about the earlier Pope threatening to kill Galileo if he didn't AND that Galileo had been right all along.
I fear for that boy's future.
Posted by Joe at 5:42 AM