Eugene Peterson has a Message. 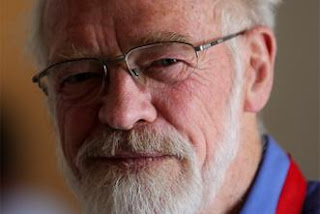 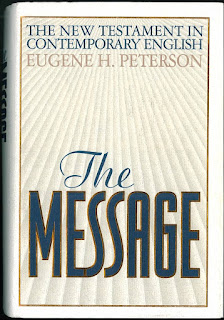 A few years back I was looking for another bible to add to my collection. I wanted to get one that didn't include all of the chapters and numbers in it.
Most people don't know that the chapters in the New Testament weren't added until the 1200s, and the verses weren't added until the 1550s. I mean, it's not like Paul sat down to write to the people in Ephesus and began with "Chapter 1, verse 1; Howdy, peeps in Ephesus! This is your old buddy, Paul...Chapter 1, verse 2..." No. Those verses and chapters were added centuries later...and we've been cherry-picking our verses to beat each other up with ever since.
ANYWAY, so I was in a local christian book store and I stumbled across Eugene Peterson's translation of the New Testament called "The Message." It kept the verses & such way off to the sides, and was written in contemporary English. I bought it, and have loved it ever since.
Needless to say, Mr. Peterson has received a bit of flack because of his translation. If King James English was good enough for Jesus, it should be good enough for us. Yeah...
So today on NPR, Mr. Peterson was interviewed about his new memoir titled "The Pastor." I could write about it, but that would spoil it for you. I'll just post the link and you can listen to it for yourself. Don't worry, it isn't a long story.
http://www.npr.org/2011/03/06/134233358/eugene-petersons-chronicles-memories-in-pastor
What a nice guy! A very gentle, gentle man. Not bad for a guy that Bono considers a hero.
Apparently, he wrote "The Message" so as to engage the folks at his church. Often times we treat the Scriptures as some dry manuel. But the bible itself states that it is alive...God Breathed...organic. Even though we often have a hard time understanding the contexts under which the individual letters and stories were written, the fact is that these words were shocking at the time...and still are if you DO read them in context. Peterson's version in the Message goes quite a ways to restoring some of that. I wouldn't use it as a study bible, per se, but for feeling the beauty of the words and ideas, it's excellent.
Anyway, I figured that I would repost the story here, and just let it be at that. But then I thought, well, maybe a little more.
#1. Here is an bit that you might find interesting. Mr. Peterson is being interviewed by the folks for U2's online magazine. http://www.atu2.com/news/connections/peterson/
#2. Here is a video in which Peterson speaks about how we sometimes treat the bible as less than the living document that it is. I think that his soft-spoken and graceful personality comes across quite well.
Wow. This was an easy post.
Peace
Joe
Posted by Joe at 5:14 PM