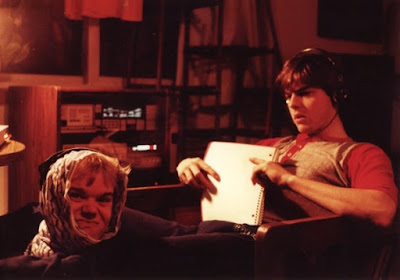 So there is this devilishly handsome fellow (On the right.) minding his own business, doing his homework & such. Unfortunately, his roommate (On the left.) is a freak who likes to put on Arab headdresses and crawl around the townhouse, planting bottle-rocket bombs in unsuspecting people's closets.
One of them only listened to "Contemporary Christian" music...except for the occasional song by Kansas. The other felt that most CCM was little more than vomit being printed onto vinyl, with a "Sparrow" or "Myrrh" label being glued to it. So the second guy was really into The Who, Neil Young, and anything "New Wave."
One of them tended to be fairly "Anal-Retentive." (Many tomes of theology were devoured while sitting on the porcelain throne.) The other guy tended to say what ever came into his jello-like substance of a brain...regardless of how inappropriate it might be.
One guy tended to be fairly serious most of the time. The other guy tended to think that anything at all was funny, including his own hernia.
And yet a friendship developed...and actually survived. (Go figure.)
Yes, I'm revisiting the joys of college...along
with the weird things that roommates do.
Introducing my friend Scott. http://111art.blogspot.com/ In my biased opinion, he just happens to be a brilliant artist. Obviously, as a result of my amazing charm, brilliance and wisdom, Scott has finally joined the dark side and become a blogger.
He would like others to get a chance to see the stuff he creates, and I think that you should see it too. In fact, I think that you should become a follower of his blog. (Mine too, if you haven't yet, you "Free Loader!") This will help Scott to feel better about himself because his ego is a very delicate thing, indeed.
But in all seriousness:
"A friend loves at all times, and a brother is born for adversity." Prov. 17:17
"A man of many companions may come to ruin, but there is a friend who sticks closer than a brother." Prov. 18:24
"Wounds from a friend can be trusted, but an enemy multiplies kisses." Prov. 27:6
Scott has been my friend for ages now. Probably the oldest consistent friend that I have. We met purely by accident. He came to my home church back when we were teens. The whole congregation had stood up to sing a song, and when it was time to sit back down again, I set a hymnal in the up-right position for him to sit on. (Such a prankster was I.)
Years later, my first day of Bethel college, a whole bunch of us were on a bus headed to the State Fair. This skinny guy a few seats a head of me turns around to look at me. He stares for a moment and then says, "HEY, you made me sit on a hymnal in your church!" And all these years later, I am still playing jokes on him.
God is full of surprises. Scott & I come from VERY different backgrounds. About the only two things we have in common is the fact that we are both "Honkeys," and that we grew up in the southern suburbs on Minneapolis. So honestly, I don't understand how we ever became friends....but we did.
The thing about a lasting friendship is that it is ultimately built of shared trials. Out of that struggle comes a trust & bond. (I know his dirty, little secrets, and he knows mine. HA!)
Actually, there is a third item that we share in common. I think it is the most important one.
The most important commonality that he & I share is a love for Jesus.
Scott came to faith in a manner different than mine, but no less real. I have watched him follow Jesus into his kingdom. He has taught me a great deal. I have watched him suffer for his love of Jesus...and I do mean suffer. This world has often been vary unfair to Scott. But his faith is still solid. In fact, I would argue that his faith is stronger now than it has ever been. I learn a great deal about the kingdom when I watch Scott.
Scott seems to have an innate understanding that this world is a temporary thing. This life is a "Chasing after the wind." Scott knows what ultimately matters...and that would be Jesus and his kingdom.
Someday that kingdom will be here in full. I am of the opinion that in the New Heaven & Earth, Scott will paint many, many, many murals for his king all over the New Jerusalem. It will be a very beautiful city, indeed.
Hopefully, that wont be for a few more years at least.
Peace
Joe
P.S. In honor of Scott's love for the band "Kansas," I present you with the following. Enjoy.
P.S.S. This is actual footage of Scott & I from a Bethel talent show back in the 50's. It's been a while, so I can't remember who was who.
Oh, what the heck, here's another. (Sorry, no video.)
Posted by Joe at 5:54 PM